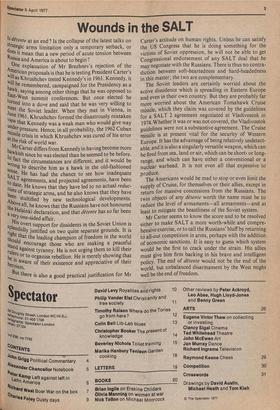 Wounds in the SALT

Is detente at an end ? Is the collapse of the latest talks on sdtrategic arms limitation only a temporary setback, or „Des it mean that a new period of acute tension between Kussia and America is about to begin ? A °Ile explanation of Mr Brezhnev's rejection of the ^nletican proposals is that he is testing President Carter's will as Khrushchev tested Kennedy's in 1961. Kennedy, it vha'in be remembered, campaigned for the Presidency as a wk, saying among other things that he was opposed to t St-West summit conferences. But once elected he urned into a dove and said that he was very willing to jnleet the Soviet leader. When they met in Vienna, in vul . ne 1961, Khrushchev formed the disastrously mistaken ew that Kennedy was a Weak man who would give way ander pressure. Hence, in all probability, the 1962 Cuban Missile crisis in which Khrushchev was cured of his error at the risk of world war. ha Mr Carter differs from Kennedy in having become more wkish since he was elected than he seemed to be before. win fact the circumstances are different, and it would be Se Ong to describe him as a hawk in the old-fashioned s'Ari,se. He has had the chance to see how inadequate to'LT agreements, and projected agreements, have been ti date. He knows that they have led to no actual reduek"ms of strategic arms, and he also knows that they have stultified by new technological developments. trahn(l've all, he knows that the Russians have not honoured a e Helsinki declaration, and that detente has so far been v,ery one-sided affair.

s Pis overt support for dissidents in the Soviet Union is rpiendidly justified on two quite separate grounds. It is 2ight' that the leading champion of freedom in the world stnoulda encourage those who are making a peaceful rulrld against tyranny. He is not urging them to kill their he i ruler again Or to organise rebellion. He is merely showing that n is s, aeroismware of their existence and appreciative of their , But there is also a good practical justification for Mr Carter's attitude on human rights. Unless he can satisfy the US Congress that he is doing something for the victims of Soviet oppression, he will not be able to get Congressional endorsement of any SALT deal that he may negotiate with the Russians. There is thus no contradiction between soft-heartedness and hard-headedness in this matter; the two are complementary.

The Soviet leaders are certainly worried about the active dissidence which is spreading in Eastern Europe and even in their own country. But they are probably far more worried about the American Tomahawk Cruise missile, which they claim was covered by the guidelines for a SALT 2 agreement negotiated at Vladivostok in 1974. Whether it was or was not covered, the Vladivostok guidelines were not a substantive agreement. The Cruise missile is at present vital for the security of Western Europe. It has the advantage of being relatively undetectable, and it is also a singularly versatile weapon, which can be fired from sea, land or air, which can be shortor longrange, and which can have either a conventional or a nuclear warhead. It is not even all that expensive to produce. The Americans would be mad to stop or even limit the supply of Cruise, for themselves or their allies, except in return for massive concessions from the Russians. The twin objects of any detente worth the name must be to reduce the level of armaments—all armaments—and at least to mitigate the beastliness of the Soviet system.

Mr Carter seems to know the score and to be resolved either to make SALT a more worth-while and comprehensive exercise, or to call the Russians' bluff by returning to all-out competition in arms, perhaps with the addition of economic sanctions. It is easy to guess which system would be the first to crack under the strain. His allies must give him firm backing in his brave and intelligent policy. The end of detente would not be the end of the world, but unbalanced disarmament by the West might well be the end of freedom.