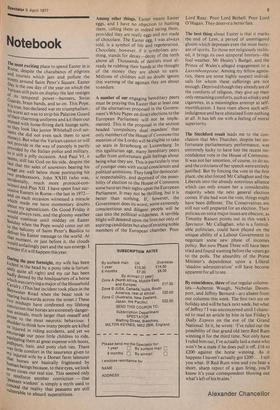 The most exciting place to spend Easter in is Rome, despite the charabancs of pilgrims and tourists which jam and pollute the sr,treets around Saint Peter's Square. Easter Day is the one day of the year on which the Vatican still puts on display the last vestiges of its temporal power—banners, Swiss 9u. ards, brass bands, and so on. This Pope, itls true, has declared war on triumphalism; his worst act was to strip his Palatine Guard 1?1their charming uniforms and kit them out instead with loose-fitting dark lounge suits, so they look like junior Whitehall civil servants (he did not even sack them to save money). But what the Vatican cannot or will not provide in the way of panoply is partly Provided by the Italian police and military, SO It still a jolly occasion. And Paul VI, it seems, still has God on his side, despite the fact that the sales of souvenirs bearing his linage are well below those portraying his .two Predecessors, John XXIII (who was,

scious) and Pius XII. I have spent four successive Easters in Rome—the last in 1972— and on each occasion witnessed a miracle Which made me have momentary doubts about my agnosticism. On Good Friday it would always rain, and the gloomy weather svould continue until midday on Easter Sunday when the Pope would come out on to the balcony of Saint Peter's Basilica to ,nellver his Easter message to the world. At that moment, or just before it, the clouds ould unfailingly part and the sun emerge. I wonder if it will happen this year.

During the past fortnight, my wife has been kicked in the head by a pony (she is fortunately quite all right) and my car has been badly dented by the hindquarters of a horse Which was carrying a major of the Household Cavalry. (This last incident took place in the "4aYSwater Road when the beast took to rearing backwards across the street.) These 2'vn Mishaps have confirmed my lifelong conviction that horses are extremely dangerous animals, much larger than oneself and Prone to the most neurotic behaviour. I '0"1-11der to think how many people are killed injured in riding accidents, and yet we encourage our poor little children to ride, 9tupping them at great expense with boots, J°dhPurs, hats, and pony club ties. There Was little comfort in the assurance given to that injured wife by a Dorset farm labourer human horses are basically frightened by nuinan beings because, to their eyes, we look ,seven times our real size. This seemed only :0 reinforce another conviction — that Peasant wisdom' is simply a myth used to conceal the reality that peasants are still vulnerable to absurd superstitions. Among other things, Easter means Easter eggs, and I have no objection to hunting them, tolling them or indeed eating them, provided they are really eggs and not made of chocolate. The Easter egg, I was always, told, is a symbol of life and regeneration. Chocolate, however, if it symbolises anything, stands for decay—decay of the teeth above all. Thousands of dentists must already be rubbing their hands at the thought of the money they are about to earn. Millions of children will no doubt ignore this warning of the agonies they are about to endure.

A number of our engaging hereditary peers must be praying this Easter that at least one of the alternatives proposed in the Government's White Paper on direct elections to the European Parliament will not be implemented. This is the proposal in the section headed 'compulsory dual mandate' that only members of the House of Commons (no mention of the Lords) will be eligible to take up seats in Strasbourg or Luxemburg. In this egalitarian age, many hereditary peels suffer from unfortunate guilt feelings about being what they are. This is pal ticulal ly true of younger ones with social consciences and political ambitions. They long for democratic respectability, and deprived of the possibility of election to the House of Commons some have set their sights upon the European Parliament. It may not be thrilling, but it is better than nothing. If, however, the Government does its worst, some extremely conscientious and diligent people will be cast into the political wilderness. A terrible blight will descend upon the lives not only of aspiring candidates but also of existing noble members of the European chamber. Poor

The best thing about Easter is that it marks the end of Lent, a period of unmitigated gloom which depresses even the most buoyant of spirits. To those not religiously inclined, it brings its own temporal horrors—the foul weather, Mr Healey's Budget, and the Prince of Wales's alleged engagement to a Luxembourgeoise. Among my fellow agnostics, there are some highly suspect individuals for whom these sufferings are not enough. Deprived though they already are of the comforts of religion, they give up their only remaining comforts, such as whisky and cigarettes, in a meaningless attempt at selfmortification. 1 have risen above such selfindulgence and have abstained fl orn nothing at all. It has left me with a feeling of moral superiority.

The Stechford result leads me to the conclusion that Mrs Thatcher, despite her unfortunate parliamentary performance, was extremely lucky to have lost the recent noconfidence vote in the House of Commons. It was not her intention, of course, to do so, and the criticisms of her speech were entirely justified. But by forcing the vote in the first place, she also forced Mr Callaghan and the Liberals into the already notorious alliance which can only ensure her a considerable majority when the next general election comes. If she had won the vote, things might have been different. The Conservatives are still not well prepared for an election. Their policies on some major issues are obscure, as Timothy Raison points out in this week's Spectator. Mr Callaghan, who is a formidable politician, could have played on the unique ability of a Labour Government to negotiate some new phase of incomes policy. But now Phase Three will have been tried and found wanting before the voters go to the polls. The absurdity of the Prime Minister's dependence upon a Liberal 'shadow administration' will have become apparent for all to see.

By coincidence, three of our regular columnists—Auberon Waugh, Nicholas Davenport, and Jeffrey Bernard—are absent from our columns this week. The first two are on holiday and will be back next week, but what of Jeffrey? I was unconcerned until I chanced to read an article by him in last Friday's Daily Express on the eve of the Grand National. In it, he wrote: 'I've ruled out the possibility of that grand old hero Red Rum winning it for the third time. Not only have I ruled him out, I've actually laid a mate who won't be a mate if he does pull it off, El 6 to £200 against the horse winning. As it happens I haven't actually got £200 . . I tell you what. If Red Rum wins and you hear a short, sharp repott of a gun firing, you'll know it's your correspondent blowing out what's left of his bi ains.'