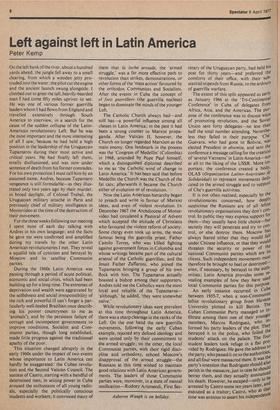 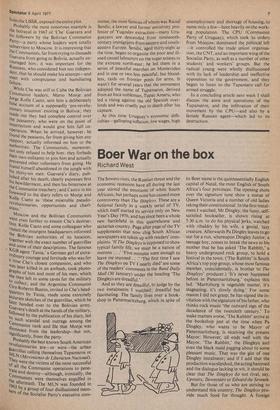 Left against left in Latin America

On the left bank of the river, about a hundred yards ahead, the jungle fell away to a small clearing, from which a wooden jetty protruded into the water; the pilot cut the engine and the ancient launch swung alongside. I climbed out to greet the tall, heavily-bearded man I had come fifty miles upriver to see. He was one of various former guerrilla leaders whom I had flown from England and travelled extensively through South America to interview, in a search for the cause of the sudden collapse of the LatinAmerican revolutionary Left. But he was the most important and the most interesting of all I saw, because he had held a high position in the leadership of the Uruguayan Tupamaros during their most active and critical years. He had finally left them, totally disillusioned, and was now under sentence of death from his former comrades. For his own protection I must call him by an assumed name, Andres, because Tupamaro vengeance is still formidable—as they illustrated only two years ago by their murder, in broad daylight, of Colonel Trabal, the Uruguayan military attaché in Paris and previously chief of military intelligence in Montevideo at the time of the destruction of their movement.

For the three weeks following our meeting I spent most of each day talking with Andres in his own language; and the facts he gave me were confirmed and amplified during my travels by the other Latin American revolutionaries I met. They reveal a squalid tale of cynicism and betrayal by Moscow and its satellite Communist parties, During the 1960s Latin America was passing through a period of acute political, economic and social crisis, which had been building up for a long time. The extremes of deprivation and wealth were aggravated by the selfishness and social irresponsibility of the rich and powerful (1 can't forget a particularly well-heeled Brazilian once describing his poorer countrymen to me as 'animals"), and by the persistent failure of corrupt and incompetent governments to improve conditions. Socialist and Communist parties, though long established, made little progress against the traditional apathy of the poor.

This situation changed abruptly in the early 1960s under the impact of two events whose importance to Latin America can hardly be exaggerated: the Cuban revolution and the Second Vatican Council, The success of Castro, starting with a handful of determined men, in seizing power in Cuba aroused the enthusiasm of all young radicals, especially the politically conscious students and workers; it convinced many of

them that la lucha armada, the 'armed struggle,' was a far more effective path to revolution than strikes, demonstrations, or other forms of the 'mass action' favoured by the orthodox Communists and Socialists. After the events in Cuba the concept of el lOco guerrillero (the guerrilla nucleus) began to dominate the minds of the younger Left.

The Catholic Church always had--and still has—a powerful influence among all classes in Latin America; in the past it had been a strong counter to Marxist propaganda. After Vatican II, however, the Church no longer regarded Marxism as the main enemy. One landmark in the process was the 'Congress of Medellin' (Colombia) in 1968, attended by Pope Paul himself, which a distinguished diplomat described to me as 'the Catholic wind of change in Latin America.' It has been said that before Medellin the Church was the Church of the fat cats; afterwards it became the Church either of evolution or of revolution.

Now the Latin American hierarchy began to preach and write in favour of Marxist ideas, and even of violent revolution. I n December 1967 the Archdiocese of Montevideo had circulated a Pastoral of Advent which accepted the attitude of Christians who favoured the violent reform of society. Some clergy even took up arms, the most famous being the guerrilla priest, Father Camilo Torres, who was killed fighting against government forces in Colombia and whose writings became part of the cultural arsenal of the Catholic guerrillas; and the Jesuit Father Zaffaroni, who joined the Tupamaros bringing a group of his own flock with him. The Tupamaros actually boasted a bishop among their supporters. Andres told me the Catholics were the most loyal and reliable of the Tupamaros'although,' he added, 'they were somewhat naive.'

While revolutionary ideas were prevalent at this time throughout Latin America, there was a sharp cleavage in the ranks of the Left. On the one hand the new guerrilla movements, following the early Cuban example, rejected any defined ideology and were united only by their commitment to the armed struggle; on the other, the local Communist parties, with their rigid discipline and orthodoxy, echoed Moscow's disapproval of the armed struggle—the Russians at this time wished to maintain good relations with Latin American governments. The leaders of those Communist parties were, moreover, in a state of mental ossification—Rodney Arismendi, First Sec retary of the Uruguayan party, had held his post for thirty years—and preferred the comforts of their office, with their sub' stantial stipends from Russia, to the ardours of guerrilla warfare.

The extent of this split appeared as early as January 1966 at the `Tri-Continental Conference' in Cuba of delegates iron) Africa, Asia, and the Americas. The purpose of the conference was to discuss waYs of promoting revolution, and the Soviet Union sent forty delegates-no less than half the total number attending. Neverthe: less they failed in their purpose, •Che Guevara, who had gone to Bcilivia, was elected President in absentia, and sent the conference a message calling for the creation of 'several Vietnams' in Latin America-0 at all to the liking of the USSR. More important, the conference created a bodY, OLA S (Organizacion Latino-Antericano Solidaridad) to represent movements dedi` cated to the armed struggle and to sunCort of Che's guerrilla activities. It is not often realised, especially by the revolutionaries concerned, how deePlY suspicious the Russians are of all leftist revolutionary organisations they don't con' trol. In public they may express support for them—they usually have little choice—but secretly they will penetrate and try to co11-. trol, or else destroy them. Moscow has always feared either that they would fall under Chinese influence, or that they would threaten the security or power of the national Communist parties which are its clients. Such independent movements n therefore be brought to heel or destroyed— even, if necessary, by betrayal to the authorities; Latin America provides some re' vealing examples ot' how they have used local Communist parties for this purpose. An early instance occurred in Cuba between 1955-7, when a non-Communist leftist revolutionary group from Havana University plotted to kill Batista. T.he Cuban Communist Party managed to infiltrate among them one of their yourter members, Marcos Rodriguez, wb° lit formed his party leaders of the plot. TheY betrayed it to the police, who foiled the students' attack on the palace. The four student leaders took refuge in a flat Pro` vided by Rodriguez. He gave the address. E0 the party, who passed it on to the authorities, and all four were massacred there. It was the party's intention that Rodriguez should als°. perish in the massacre, just in case he should. betray them, and they actually announeal his death. However, he escaped—onlY CO , arrested by Castro some ten years later, all executed as a traitor; Castro, who at thae time was anxious to assert his independenc

from the USSR, exposed the entire plot.

Probably the most notorious example is the betrayal in 1967 of 'Che' Guevara and hIs followers by the Bolivian Communist Party—a party whose leaders were totally subservient to Moscow. It is interesting that the Communists, far from trying to dissuade Guevara from going to Bolivia, actually encouraged him; it was important for the Russians, who considered him too independent, that he should make his attempt—and meet with conspicuous and humiliating failure.

While Che was still in Cuba the Bolivian Communist leaders, Mario Monje and Jorge Kolle Cueto, sent him a deliberately false account of a supposedly 'pre-revolutionary situation' existing in Bolivia ; they made out they had complete control over the peasantry, who were on the point of Insurrection and would give him full cooPeration. When he arrived, however, he found the peasants, far from giving him any support, actually informed on him to the authorities. The Communists, moreover, not.

only refused to help him: they forbade

their own militants to join him and actually Prevented other volunteers from going. He . found himself abandoned in the jungle with Ills thirty-six men. Guevara's diary, published after his death, clearly expresses hrst his bewilderment, and then his bitterness at the Communist treachery; and Castro in his fureword to the diary refers to Monje and Kolle Cueto as 'these miserable pseudo revolutionaries opportunists and charlatans: Moscow and the Bolivian Communists went even further to ensure Che's destruction. Kolle Cueto and some colleagues who visited the insurgent headquarters informed the Bolivian authorities of its location, tugether with the exact number of guerrillas ajid some of their descriptions. The famous "GB agent 'Tania; a German girl of extraordinary courage and fortitude who was for a time Che's closest companion, and who was later killed in an ambush, took photograPhs of him and most of his men, which She then left in some caves for the military to collect; and the Argentine Communist Ciro Roberto Bustos, invited to Che's headquarters by Tania, made some extremely iaccurate sketches of the guerrillas, which he _ater handed over to the Bolivian army. k,--luevara's death at the hands of the military, !ullowed by the publication of his diary, led i„..0 such scandal and outrage among the .°Mmunist rank and file that Monje was u.ismissed from the leadership—but not, significantly, from the party. Probably the best known South American revolutionaries are—or were—the urban g_uerrillas calling themselves Tupamaros or !1,!1--1\1 (Movitniento de Liberacion Nacional). ' ' hey were the victims of the most successful pf all the Communist operations to penecstrate and destroy—although, ironically, the 'mmunists were themselves engulfed in tihe aftermath. The MLN was founded in ,963 by a group of four disillusioned memoers of the Socialist Party's executive com mittee, the most famous of whom was Raoul Sendic, a lawyer and former university professor of Yugoslav extraction—many Uruguayans are descended from nineteenthcentury immigrants from eastern and southeastern Europe. Sendic, aged thirty-eight at the time, began to organise the poor and illused casual labourers on the sugar estates in the extreme north-east ; he led them in a series of peaceful marches on Montevideo and in one or two less peaceful, but bloodless, raids on frontier posts for arms. It wasn't for several years that the movement adopted the name of Tupamaros, derived from an Inca nobleman, Tupac Amaru, who led a rising against the old Spanish overlords and was cruelly put to death after his capture.

unemployment and shortage of housing, to name only a few—bore heavily on the working population. The CPU (Communist Party of Uruguay), which took its orders from Moscow, dominated the political left —it controlled the trade union organisation, the CNT, and an important wing of the Socialist Party, as well as a number of other students' and workers' groups. But the radical young were .wholly disillusioned with its lack of leadership and ineffective opposition to the government, and they began to listen to the Tupamaro call for armed struggle.

In a concluding article next week I shall discuss the aims and operations of the Tupamaros, and the infiltration of their movement by the CPU—and also by a female Russian agent—which led -to its destruction.