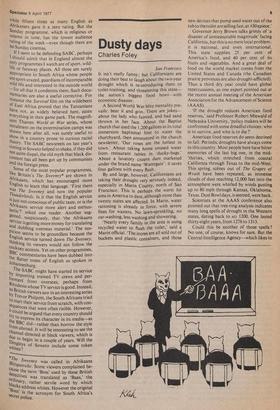 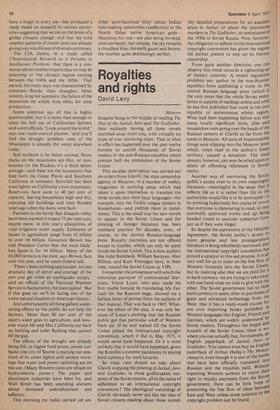 San Francisco It isn't really funIV, but Californians are doing their best to laugh about the two-year drought which is re-introducing them to toilet-training, and threatening this state— the nation's biggest food bowl—with economic disaster.

A Second World War blitz mentality prevails: bear it and grin. There are jokes— about the lady who fainted, and had sand thrown in her face. About the Baptist church that used the 1,200 gallons in its total immersion baptismal font to water the churchyard, then announced in the church newsletter, 'Our roses are the holiest in town.' About taking home unused water from restaurant tables in 'ducky-bags.' About a lavatory cistern dam marketed under the brand name 'Watergate': it saves four gallons with every flush.

By and large, however, Californians are taking their drought very seriously indeed, especially in Mann County, north of San Francisco. This is perhaps the worst hit area in America to date, although more than twenty states are affected. In Mann, water rationing is already in force, with severe fines for wasters. No lawn-sprinkling, no car-washing, less washing and showering. 'Nearly every family in the area is using recycled water to flush the toilet,' said a Mann official. 'The stores are all sold out of buckets and plastic containers, and those new devices that pump used water out of the t u b to the toilet are selling fast, at s30 apiece.'

Governor Jerry Brown talks grimly of 'a disaster of unmeasurable magnitude' facing California,.but this is no mere local problem : it is national, and even international. This sta te supplies 25 per cent of America's food, and 40 per cent of its fruits and .vegetables. And a great deal of' food on the world market comes from the United States and Canada (the Canadian prairie provinces are also drought-afflicted). Thus a third dry year could have global repercussions, as one expert pointed out at the recent annual meeting of the American Association for the Advancement of Science (AAAS).

'If the drought reduces American food reserves,' said Professor Robert Miewald of Nebraska University, 'policy makers will be confronted with some dreadful choices : who is to survive, and who is to die?'

American food reserves do seem destined to fall. Per iodic droughts have always come to this country. Most people here have bitter memories of the last big one, in the mid'thirties, which stretched from coastal California through Texas to the mid-West. This spring, scenes out of The Grapes of Wrath have been repeated, as immense clouds of dust reaching 12,000 feet into the atmosphere were whirled by winds gusting up to 80 mph through Kansas, Oklahoma, Texas. Dust Bowl days, it seemed, were back.

Scientists at the AAAS conference also pointed out that tree-ring analysis indicates many long spells of drought in the Western states, dating back to AD 1200. One lasted thirty-eight years, from 1276 to 1313.

Could this be another of those spells? No one, of course, knows for sure. But the Central Intelligence Agency—which likes to have a finger in every pie—has produced a study based on research in various universities suggesting that we are on the brink of a global climatic change: and that the mild weather patterns of recent years are already giving way to a climate of dramaticextremes.

The CIA claims, in a study called Climatological Research as it Pertains to Intelligence Problems, that there is a consensus about weather experts that we may be returning to 'the climatic regime existing between the 1600s and the 1850s.' That period, the study says, was characterised by extremes—floods, then droughts, bitter winters, long hot summers; the failure of the monsoons on which Asia relies for crop production.

Some scientists say all this is highly questionable; but it is more than enough to scare the hell out of Californian farmers and water officials. 'Look around the world,' says one water-control planner, 'and you'll find the drought problem west of the Mississippi is already the worst anywhere today.'

Soil moisture is far below normal. Snow packs on the mountains are thin, or non. existent tin the Rockies it's a third below average—and these are the mountains that feed both the Great Plains and Southern California in summer). Snowfall has been even lighter on California's own mountains. Reservoirs have sunk to 40 per cent of capacity, leaving houseboats high and dry, exposing old buildings and trees flooded years ago when the dams were built.

Farmers in the fertile San Joaquin valley have been warned to expect 75 per cent cuts, maybe more, in this year's allocations of vital irrigation water supply. Estimates of losses in agriculture range from 82 billion to over 86 billion. Governor Brown has told President Carter that 'the most likely' loss figure is for 84 billion. Many of the 63,000 farmers in the state, says Brown, face ruin this year, and he wants federal aid.

'There's been nothing spectacular, no one dramatic day of terror and courage of the sort you get when an earthquake occurs,' said an official of the National Weather Service in Sacramento, the state capital. 'But if this goes on we'll be facing one of the worst natural disasters in American history.'

And unfortunately all those gallant watersaving efforts by the public do not help the farmers. More than 80 per dent of the state's water goes to agriculture, and however much Mr and Mrs California cut back on bathing and toilet flushing they cannot fill the gap.

The effects of the drought are already being felt, in higher food prices, power cutbacks (the city of Seattle is putting out onethird of its street lights) and earnest warnings that water and power rationing are on the way. (Many Western states are reliant on hydro-electric power.) The paper and aluminium industries have been hit, and Wall Street has been sounding alarums about increased unemployment and inflation.

other semi-facetious story about Indian rain-making ceremonies (ineffective) in the North. Other native American gods— Mammon for one—are also being invoked, most earnestly; but outside, the sky remains a cloudless blue, the earth gaunt and brown, the weather quite depressingly perfect.