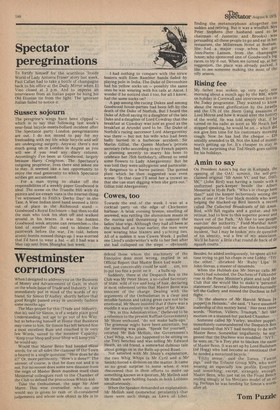 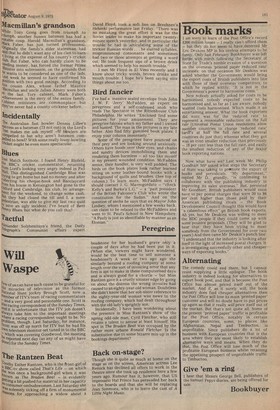 To fortify himself for the scurrilous 'Inside World of Lady Antonia Fraser' story last week, Paul Callan had to take a bottle of champagne back to his office at the Daily Mirror when El Vino closed at 3 p.m. And to impress an interviewer from an Italian paper he hung his Old Etonian tie from the light. The ignorant Italian failed to notice it.

The peregrine's wings have been clipped — which is to say that following last week's near-fatal bicycle-meets-bollard incident after The Spectator party London peregrinations are out. I do not intend to pay for my freeloading with my life while bicycle and self are undergoing surgery. Anyway there's not much going on in London in August as you will see if you read any diary column. Accordingly I've been at Goodwood, largely because Harry Creighton, The Spectator's outgoing proprietor, lives there and asked me to stay. It seemed like a last opportunity to enjoy the mad generosity to which Spectator scribes get accustomed.

For a man trying to shake off the responsibilities of a weekly paper Goodwood is ideal. The scene on the Trundle Hill with its picnics and ice-cream vans is the nearest thing I've witnessed to Frith's Derby Day' in the Tate. A West Indian steel band seemed a little out of place in the Richmond stand — Goodwood's Royal Enclosure — but then so did the man who took his shirt off and walked around in his braces. It was the hottest Goodwood week anyone can remember the kind of weather that used to blister the paintwork before the war, I'm told, before atomic bombs messed things up. I was worried that I'd have to wear a hat — all I had was a Mao cap sent from Shanghai last week. I had nothing to compare with the straw boaters with Eton Rambler bands faded by playing polo in India. The Duke of Devonshire had his yellow socks on — possibly the same ones he was wearing with his tails at Ascot. I wonder if he noticed that I too, for all I know, had the same socks on?

A gap among the racing Dukes and among Goodwood house-parties had been left by the death of the Duke of Norfolk. But I heard the Duke of Atha saying to a daughter of the late Duke and a daughter of Lord Cowdray that the breakfast at Cowdray was just' as good as the breakfast at Arundel used to be. The Duke of Norfolk's racing successor Lord Abergavenny was there — but not his wife who had been badly burned in a barbecue accident. Sir Martin Gilliat, the Queen Mother's private secretary (who according to my French papers is planning secretly to marry his boss to celebrate her 75th birthday!), offered to send some flowers to Lady Abergavenny. But he was told they were unhygienic and particularly dangerous to a burns patient. The potted plant which he then suggested was even worse. "In that case I'll send her a trowel so that she can start digging when she gets out." Gilliat told Abergavenny.

Towards the end of the week I was at a cocktail party on the edge of Chichester harbour. A brisk evening breeze, smelling of seaweed, was rattling the aluminium masts in the marina and threatening to remove the ladies' blue wigs. Although they had all been at the races half an hour earlier, the men were now wearing blue blazers and yachting ties. All of a sudden it was Cowes Week. I pulled one Lloyd's underwriter's wife to her feet after she had collapsed on the steps — obviously finding the metamorphosis altogether too sudden and retiring. But it was a windfall. Mrs Peter Stephens (her husband used to be chairman of Justerini and Brooks) was persuading all these people to go and eat in her restaurant, the Millstream Hotel at Bosham. She had a major coup when she got Jean-Pierre Lanson, from the champagne house; who sponsored one of Goodwood's big races, to try it out. When we turned up, at her suggestion, the place was already packed. I like to see someone making the most of the silly season.

My father was woken up very early one morning about a month ago by the BBC while on holiday in Cornwall and interviewed live on the Today programme. They wanted to know about the recent glorification by the Israelis and the UN of the Stern Gang assassins of Lord Moyne and how it would alter the history of the world. He was told simply that, if he turned on his radio as soon as Mr Heath had stopped speaking, he would be on — which did not give him time for his customary morning cough. Now he has had the cheque — El° untidily amended to £8. Not the kind of money worth getting up for. It's cheaper to stay in bed. Not surprising that Ted Heath goes sailing for his holidays.

On President Amin's big day in Kampala, the opening of the OAU summit, the self-proclaimed original "Idi Amin VC and bar, DSO, MC" (John Bird) was having a tussle with a uniformed park-keeper beside the Albert Memorial in Hyde Park. "Who's in charge here then?" said the keeper lecherously seizing the arm of one of the four black models who were helping the blacked-up Bird launch a record called The Collected Broadcasts of ldi Amin. Bird, with full regalia and a guitar, and his retinue, had to bow to this superior power and move out of the Park. "Ah like to see peop1e exercisn' der authority," Field-Marshal Amin magnanimously told me after this humiliating incident, "but I may be lookin' into de question of his identity, wid a few of my associates. We'll be havin' a little chat round de back of de squash courts."

While Tony Greig goes from triumph to triuMph, another Sussex batsmen has had a notable coup. Harold Macmillan's grandson, Mark Faber, has just turned professional. Originally the family's elder statesman had said that he didn't want any of his clan to earn a living at the expense of his county's cricket clab. But Faber, who can hardly claim to be Lleeding money, has, forced the former Prime Lalinister into submission, on the grounds that :le Wants to be considered as one of the lads. Last week he seemed to have confirmed his Position with two good innings. According to h,lis cousin Alex, whose father Maurice ,wlaomillan and uncle Julian Amery were both '11 the last Tory cabinet, Mark Faber's achievement is the envy of the entire family. Cabinet ministers are commonplace but theY've never had a county cricketer before.

The Australian fast bowler Dennis Lillee's „lbccess as a batsman (73 not out) in the Lord's leSt makes me ask myself —if biswlers are c°1flpelled to bat why aren't batsmen cornPe,Iled to bowl? With some really lousy bowling uricket might be even more spectacular.

131.UeS ^rpt Match footnote: I found Henry Blofeld, ?Ile BBC's cricket commentator, returning l'0111 Lord's looking very angry indeed in Pall Itila,11. This distinguished Cambridge Blue was Piing to get home but had no money and after r'llecting his cheque-book and Barclaycard „t°111 his house in Kensington had gone to the L'xford and Cambridge, his club, by arrange1,11ent for the weekend, to change some cash. Nit they had closed the till and I. a mere tlestrian, was able to give my last two quid save an ugly incident. I've heard of Bent renny Blues, but what do you call this?

Alexander Solzhenitsyn's friend, the Daily Telegraph's Communist affairs expert David Floyd, took a soft line on Brezhnev's Helsinki performance last Friday. -There was no mistaking the great effort it was for the Soviet leader to make his important twentyminute speech yesterday, and in particular the trouble he had in articulating some of the

trickier Russian words he slurred syllables, mispronounced consonants and sometimes had two or three attempts at getting a word out. He took frequent sips of a brown drink which seemed to help his mouth trouble."

I met Mr Floyd in El Vino recently and I know about tricky words, brown drinks and mouth trouble. I hope he's been saying nice things about me too.

I've had a massive sealed envelope from John J. W. F. 'Jerry' McFadden, an expert on peregrines and a self-confessed snob who reads The Spectator in the Rittenhouse Club Philadelphia. He writes "Enclosed find some pictures for your amusement. They are peregrine falcons which my father and I owned and hunted. The man in the pictures is my late father. Also find fifty gummed book plates. I enjoy your column immensely."

ome of the peregrines have pounced on their prey and are looking around anxiously. Others have hoods over their eyes, and chains and sundry devices immobilising them and rendering them harmless — all too like myself in my present wounded condition. McFadden senior, their handler, is very well padded. The birds on the book plates look rather learned sitting on some leather-bound books with a background of quills and brushes. (See top of column.) To learn more, McFadden says I should contact J. G. Mavrogordato — "check Kelly's and Burke's L.G." — a "past president of the British Falconer's Club who wrote the constitution for the Sudan." And on the question of snobs he says that ex-Mayor John Lindsey, whom I mentioned a few weeks back, can claim to be related to the McFaddens and went to St. Paul's School in New Hampshire. "A Pauly is just as identifiable by manner as an Etonian."