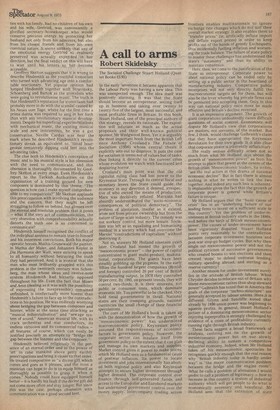 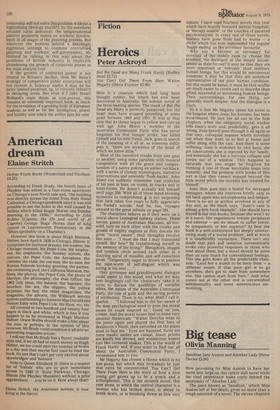 A call to arms

The Socialist Challenge Stuart Holland (Quartet Books £5.95) In the early 'seventies it became apparent that the Labour Party was having a new idea. This was unexpected enough. The idea itself was positively alarming. It was that the State should become an entrepreneur, setting itself up in business and taking over twenty to twenty-five of the largest, most successful, and most profitable firms in Britain. In this book, Stuart Holland, one of the principal authors of this strategy, reveals its rationale. The exposition will infuriate as much as the actual proposals and their well-known political sponsor, Mr Wedgwood Benn. Yet it is arguably the most important book from the British Left since Anthony Crosland's The Future of Socialism (1956) whose central thesis it explicitly sets out to disprove. It puts the case for socialism in terms not of values but of tasks, thus linking it directly to the current crisis whose evolution we watch with fascinated and despairing horror.

Crosland's main point was that the old capitalist ruling class had lost power to the Keynesian State. Through its central fiscal and monetary levers the State could guide the economy in any direction it desired, irrespective of who owned the means of production. Marx was decisively refuted: Marxists had absurdly underestimated the -socio-economic consequences of political democracy". The problem of alienation, insofar, as it existed, arose not from private ownership but from the nature of large-scale industry. The remedy was not workers' control, but more leisure. Socialism was left as an equalising and humanising residual in a society which had overcome the Marxist "contradictions of capitalism" without destroying it.

Not so, answers Mr, Holland nineteen yearS later. Crosland had missed the growth of "mesoeconomic power" — the power of capital concentrated in giant multi-product, multinational, corporations. The giants have been steadily gobbling up the pygmies. In the early 'fifties the hundred largest companies (British and foreign) controlled 20 per cent of British manufacturing output. In 1970 they controlled 50 per cent. By 1985, on present trends, they will control two-thirds. It is their interests, not public or consumer ones, which dominate economic life. Too powerful to be checked, they hold timid governments in thrall. National states are their tramping grounds, national currencies the small change of their financial speculations.

The core of Mr Holland's book is taken up with the demonstration of how the growth of -mesoeconomic power" has undermined macroeconomic polic,Y. Keynesian policy assumed the responsiveness of economic factors to government policy. However, the corporate sector can insulate itself from government policy to the extent that it can plan and manage its own markets and supplies. Market control gives it power to make prices, which Mr Holland sees as a fundamental cause of postwar inflation. Its power to locate investment and jobs internationally has aborted both regional policy and also Keynesian attempts to secure higher investment through higher demand. The corporate control over finance through self-generated funds and access to the Eurodollar and Eurobond markets has undermined government control over the money supply. Intercompany trading across frontiers enables multinationals to ignore exchange rate changes which do not suit their overall market strategy. It also enables them to -transfer prices" (ie, artificially inflate import and deflate export prices) in order to keep profits out of the hands of greedy Exchequers, thus incidentally fuelling inflation and worsening the trade balance. The failure of state policy to master these challenges has undermined the state's -autonomy" and thus its ability to maintain consensus.

Here, then, we come to the justification of the State as entrepreneur. Corporate power to abort national policy can be ended only by setting up a public sector in the heartland of manufacturing industry. Competitive public enterprises will not only directly fulfill the, macroeconomic targets set for them, but will also be the lever whereby big private firms can be pressured into accepting them. Only in this way can national policy once more be made effective and Britain's decline reversed.

It is an impressive argument. The growth of giant corporations undoubtedly raises difficult questions of social control. Economists will dispute Mr Holland's view that corporations are masters, not servants, of the market. But few, I think, would challenge Galbraith's claim that they have appropriated the Keynesian Revolution for their own goals. It is also clear that corporate power is inherently inflationary.

The really serious difficulty arises not so much from what Mr Holland says about the growth of -mesoeconomic power" as from his attempt to place that power at the centre of the British crisis. Mesoeconomic leaders. he writes, "are the real actors in this drama of national economic decline". But in fact there is almost , nothing in what he writes to link the two together. And indeed any such link is inherently implausible given the fact that the growth of corporate power is general while Britain's failure is unique.

Mr Holland argues that the 'basic cause of crisis" lies in an "underlying failure of our leading firms to invest on a sufficient scale in this country". Yet the problem of under-investment in British industry starts in the 1880s, well before the birth of British mesoeconomic power. The causes of under-investment have been vigorously disputed. Stuart Holland points very reasonably to the contradiction between corporate investment horizons and post-war stop-go budget cycles. But why then single out mesoeconomic power and not the political cynicism of successive governments who created booms to win elections and then created 'stops' to defend overseas lending, military spending abroad, and sterling as a reserve currency?

Another reason for under-investment surely lies in the attitude of British labour. When Chrysler decides to relocate out of Britain why 'blame mesoeconomic rather than shop steward power? Galbraith has noted that in America the goals of the corporate "techno-structure" are generally accepted by labour unions. Here.it is different. Glynn and Sutcliffe noted that already by 1890 union power was beginning to squeeze profits. In general, Stuart Holland's picture of a dominating mesoeconomic sector enjoying superprofits is strongly challenged by evidence of a crisis of profitability currently running right through British industry. These facts suggest a broad framework of analysis, centring not on the growth of mesoeconomic power but on our slowly declining ability to sustain a competitive industrial economy. Indeed, when Mr Holland takes off his mesoeconomic spectacles he recognises quickly enough that the real reason why "British industry today is hardly under way" is "the major communication problem between the bridge and the engine room". What he calls a problem 'of alienation I would prefer to Call a problem of legitimacy — how to recreate in this country a system of industrial authority which will get people to do what is economically necessary and beneficial. Mr Holland sees that the extension of state

ownership will not solve this problem without a legitimising ideology (myth?). So the mandarin socialist turns democrat; the temperamental planner prudently insists on workers' involvement in all stages of the planning process. But whatever the motives behind a dazzlingly ingenious attempt to combine centralised planning and workers' self-government, Mr Holland by talking in this way about the problems of British industry is implicitly abandoning the growth of corporate power as his main analytic tool.

If the growth of corporate power is not central to Britain's decline, then Mr Benn's strategy of competitive public enterprises will not reverse it, however useful it may be for more limited purposes, eg, to relocate industry in decaying areas. But even if I take Stuart Holland's main thesis as non-proven, this remains an extremely important book, as much for the revelation of a growing body of European analysis, as well as for the intelligence, power and lucidity with which the author puts his case.