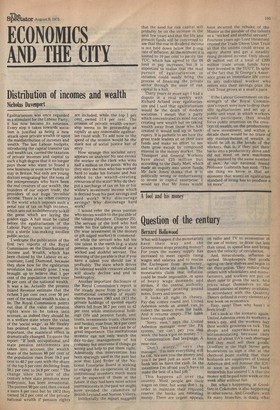 Distribution of incomes and wealth

Egalitarianism was once regarded as a stimulant for the Labour Party; it has now become its neurosis. Every step it takes towards socialism is justified as being a new attack upon private wealth or upon the maldistribution of incomes and wealth. The last Labour budgets, introducing the capital transfer tax and wealth tax, carried the taxation of private incomes and capital to such a high degree that it no longer pays those who want to found a new business or even new family to stay in Britain. Not only are young doctors emigrating( but the sons of the entrepreneurs who have been the real creators of our wealth, the founders of our export trade, the providers of our huge 'invisible' income. There is no other country in the world which imposes such a penal rate of tax on high incomes, which sets out so deliberately to kill the geese which are laying the golden eggs. A halt must be called before the egalitarianism of, the Labour Party turns our economy into a sterile loss-making swollen public sector.

I welcqme the publication of the first two reports of the Royal 'Commission on the Distribution of Income and Wealth, which has .been chaired by the Labour ex-accountant; Lord Diamond, because they show how far the egalitarian revolution has already gone. I was brought up to believe that 1 per cent of the population owned over 80 per cent of the national wealth. It was a lie. Actually the present Inland Revenue estimate that the richest 5 per cent own over 50 per cent of the national wealth is also a lie. The Royal Commission points out that if the value of pension rights were to be taken into account, as indeed they should be in a welfare state where the value of the 'social wage', as Mr Healey has pointed out, has become so important, the statistical effect is dramatically changed. To quote the report: "If both occupational and State pension entitlements are taken into account the wealth share of the bottom 80 per cent of the population rises from 19.2 per cent to 40.7 per cent with the share of the top 5 per cent declining from 50.1 per cent to 34.9 per cent." The change since the turn of the century when state pensions were embryonic, has been sensational. The poorest 90 per cent then owned a mere 8 per cent but by 1972 they owned 54.2 per cent of the private national wealth if pension rights are included, while the top 1 per cent owned 17.4 per cent. The erosion of private wealth-ownership seems to be proceeding as rapidly as any reasonable egalitarian could wish. To add now to the speed of the erosion would be the mark not of social justice but of envy.

How strange this socialist envy appears on analysis! No one envies the worker or the clerk who wins half a million on the pools. Why do they envy the man who has worked hard to make his fortune and has added to the wealth-creating resources of the state? Why do they put a surcharge of tax on his or his widow's investment income which is derived from his past savings and hard work? Why discourage savings? Why discourage hard work?

I would refer the pious puritan who envies wealth to the parable of the talents (Matthew, Chapter 25). The servant' f the lord who had made his five talents grow to ten (by wise investment in the money or gilt-edged market) is commended while the servant who hid his one talent in the earth (e.g. a state pension scheme) is rebuked as a wicked and slothful servant. The meaning of the parable is that if you have a talent you should use it profitably. The state which drives its talented wealth-creators abroad will slowly decline and end in bankruptcy.

Another important disclosure of the Royal Commission's report is the steady Move from private to. institutional ownership of equity shares. Between 1963 and 1973 the private holdings of quoted equity shares fell from 56.7 per cent to 42 per cent while institutional holdings (life and pension funds, unit trusts, investments trusts, charities and banks), rose from 30.4 per cent to 46 per cent. This trend can be of great importance. The institutional investor can not only watch the .day-to-day management of his company but intervene if things go wrong and help to put them right. Admittedly this intervention has been sparingly used in the past but now that Lord Ryder of the National Enteiprise Board is seeking to engage the co-operation of the institutional investors much more can be expected of them in the future. If they had been more active internationists in the past we might have avoided the calamities of British Leyland and Norton Villiers.

Incidentally the report suggests that the need for risk capital will probably be on the increase in the next few years and that the life and pension funds will be concerned to see that the rise in dividend income is not held down below the going rate of inflation. At the moment it is limited to 10 per cent to pacify the TUC, which has agreed to the £6 limit in pay increases, but it is important to realise that the mad pursuit of egalitarianism in incomes could easily bring the process of financing the private sector through the issue of risk capital to a halt.

Thirty years or more ago I had a dispute in a rival weekly with Richard Acland over egalitarianism and I said that egalitarianism would be the death of modern socialism. I meant that a party which concentrated its mind not on creating new wealth but on taking wealth away from those who had created it would end up in bankruptcy. It is pathetic to see how the great trade leaders sit on their own funds and make no effort to see them grow except by compound interest in the money market. The Transport and General Workers have about £25 million but according to the Daily Mail, which made an inquiry into union funds, Mr Jack Jones thinks that it is politically wrong or embarrassing to invest in capital enterprise. I would say that Mr Jones would

have incurred the rebuke of the Master in the parable of the talents as a "wicked and slothful servant". Fourteen years ago Lord Hirshtield created the Trade Union Unit Trust so that the unions could invest in equity shares and get a steadily rising dividend income. Only about £8 million out of a total of £200 million trade union funds have been invested in the TUUT. In spite of the fact that St George's Assurance gives an immediate life cover to any individual worker who enters into their savings plan the Unit Trust grows at a snail's pace.

If the Labour Government on the strength of the Royal Commission's report were now to drop their silly egalitarianism and set up a public unit trust, in which workers would participate, they would focus public attention on the creation of wealth, on the productivity of new investment, and within a decade there would be no trace of any maldistribution of wealth. It would be all in the hands of the workers, that is, if they put their backs into a productivity drive and did not insist on new machines being manned by the same number of men. As our national friend Professor Galbraith has said. "The one thing we know is that an economy that wants an egalitarian standard of living has to produce a lot more".