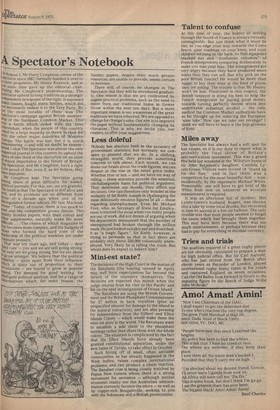 of the SPectator since 1967, formally handed it over to its new proprietor, Mr Henry Keswick, and at tr,he same time gave up the editorial chair. Juring Mr Creighton's proprietorship, The °Pectator upheld its long tradition as a strongly independent newspaper of the right. It espoused many causes, fought many battles, which did Rot necessarily endear it to the Tory Party. By f,,ar the most notable of these was The qectator's campaign against British membership of the European Common Market, This Was a -battle which ended with the June referendum, when the people of this country v6ted by a large majority to throw in their lot With the other major countries of Western Nrope. The battle was lost, but it is worth rkemembering and will no doubt be rememueled that The Spectator was almost the only re,sPected journal in this country to uphold the v,.'ews of one third of the electorate on an issue major importance to the future of Britain. rite Spectator, and Mr Creighton, have a right

be proud of this, even if, as we believe, they Were mistaken.

Mr Creighton kept The Spectator going uoring times of great difficulty for weekly Political journals. For this, too, we are grateful. Ibe truth is that The Spectator is still alive and tItetl, and its problems are no different from ose of a decade ago when one of its mistinguished former editors, Mr lain Macleod, wrote: "Today, of course, there is too much to read and the competition grows fiercer. The quality Sunday papers, with their colour and her supplements, naturally make life more 41ifficult . . The choice. Of which magazine to Uy becomes more complex, and the budgets of `nose who formed the hard core of the readership of the political weeklies are under constant pressure." ,kThat was ten years ago, and today dear card core' you and we are still going strong. !ot only are we going strong, but we are about `° grow stronger. We believe that the political Iveeklies quite apart from their influence, 14',hich is quite out of proportion to their co'culations are bound to grow in popular P'Peal. The demand for good writing, for 'otelligent political analysis, and for a range of contributions which, for some reason, the

Sunday papers, despite their much greater resources, are unable to provide, seems certain to increase.

There will, of course, be changes in The Spectator, but they will be introduced gradually. One reason is that we are confronted by urgent-practical problems, such as the need to move from our traditional home in Gower Street within the next ten days. But a more important reason is our awareness of the great traditions we have inherited. We are opposed to change for change's sake. Our aim is to improve the paper without fundamentally changing its character. That is why we invite you, our readers, to offer your suggestions.

Nobody has absolute faith in the accuracy of government statistics, but normally we conspire to pretend that we do. In a shifting, intangible world, they provide something concrete to talk about. Each month, we can shake our heads about the trade figures, we can despair at the rise in the retail price index. Whether true or not and we have no way of telling these statistics provide the essential, unchallengeable basis for political argument. They determine our moods, they affect our decisions. One can therefore only wonder at the audacity of Sir Keith Joseph in diallenging the most deliciously emotive figures of all those regarding unemployment. Even Mr Michael Foot, who, as Secretary of State for Employment is blamed the most when too many people are out of work, did not dream of arguing when his department announced that the number of unemployed had broken through the million mark. He just looked suitably sad and described it as "a tragic figure." Sir Keith, however, is trying to persuade us that in fact there are probably only about 550,000 voluntarily unemployed. Very likely he is telling the truth. But whom does he expect to believe him?

The decisions of the High Court in the matter of the I3anabans (the hearing opened in April) may well have repercussions far beyond the future of the islanders themselves. The decisions are expected this month when the judge returns from his visit to the Pacific and his on-the-spot investigations of Ocean Island.

The Banabans are suing the British Government and the British Phosphate Commissioners for £7 million in back royalties (plus an unspecified amount for damage to the island in the mineral extraction), and are also pressing for independence from the Gilbert and Ellice Islands Colony which would make them the mini-est state in the world. The Banabans want to establish a sole claim to the phosphate earnings rather than share them with the whole colony. The situation is complicated by the fact that the Ellice Islands have already been granted constitutional separation, under the new name of Tuvalu, to take effect in October. Such hiving off of small, often unviable communities, as has already happened in the West Indies, raises complex international problems, and can produce a chain reaction. The Banaban case is being closely watched by Papua New Guinea where there is a strong movement for secession although neither economic reality nor the Australian administration currently favours the move as well as by copper-rich Bougainville, seeking to join with the Solomons, still a British protectorate.

At this time of year, the horror of driving through the South of France is always virtually unimaginable. But just think what it must be like, as you edge your way towards the Costa Brava, your roadmap on your knee, and your children whining in the back, to find signposts blacked out and -confusion columns" of French winegrowers conspiring deliberately to make you lose your way. The winegrowers are very angry because they have produced more wines than they can sell. But why pick on the poor British tourist? He would be more than happy to buy their wine at the kind of prices they are asking. The trouble is that Mr Healey won't let him. Frustrated in this respect, the British taxpayer is doing his best to help the French winegrower by paying good money towards turning perfectly decent wines into undrinkable industrial alcohol the only method the Common Market authorities have so far thought up for reducing the European 'wine lake.' How can we take our revenge? I think we will have to leave it the hop-growers of Kent.

The Spectator has always had a soft spot for lost causes, so it is our duty to report what is probably the final throw of Britain's anti-metrication movement. This was a grand fête held last weekend at the Wiltshire home of Sir John Betjeman's daughter, Candida Lycett-Green. Visitors were invited to "stand up for the foot," and in fact there was a competition for the most beautiful foot won, incidentally, by the impresario Michael White. Presumably, one will have to get hold of Mr White from now on whenever an accurate measurement is required. It was an afternoon full of incident. Mrs Lycett-Green's husband, Rupert, was thrown into a lake by some local drunks, but recovered in time to ascend in a hot-air balloon. The only trouble was that most people seemed to forget the cause which had brought them together. This may have been because there was too much entertainment, or perhaps because they had to pay for everything in decimal currency.

The qualities required of a great rugby player are not obviou'sly calculated to prepare a man for high judicial office. But Sir Carl Aarvold, who has just retired from the Bench after eleven years as Recorder of London, played international rugby many times in his youth and captained England on seven occasions. Can the Old Bailey look forward in future to the imposing figure on the Bench of Judge Willie John McBride?