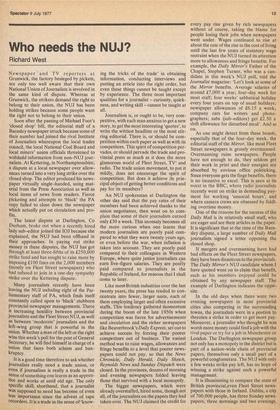 Who needs the NUJ?

Newspaper and TV reporters at Grunwick, the factory besieged by pickets, are only too well aware that their own National Union of Journalists is involved in the same kind of dispute. Whereas at Grunwick, the strikers demand the right to belong to their union, the NUJ has been holding strikes because some people want the right not to belong to their union.

Soon after the passing of Michael Foot's 'closed shop' bill, the editorial staff of a Barnsley newspaper struck because some of their number had joined the rival Institute of Journalists whereupon the local trades council, the local National Coal Board and local miners' union officials threatened to withhold information from non—NUJ journalists. At Kettering, in Northamptonshire, a dispute at a local newspaper over allowances turned into a very long strike over the closed shop. The editor produced his newspaper Virtually single—handed, using material from the Press Association as well as local items of news from readers. Fierce picketing and attempts to 'black' the PA copy failed to close down the newspaper which actually put on circulation and profits.

The latest dispute at Darlington, Co Durham, broke out when a recently hired lady sub—editor joined the IOJ because she explained, the NUJ had been offhand in their approaches. In paying out strike money in these disputes, the NUJ has got through at least three-fifths of its £250,000 strike fund and has sought to raise more by imposing £100 fines on the 2,000 members (mostly on Fleet Street newspapers) who had refused to join in a one-day sympathy strike over the Kettering dispute.

Many journalists recently have been leaving the NUJ including eight of the Parliamentary staff of PA, which finds itself constantly called upon to 'black' stubborn provincial newspaper managements. There is increasing hostility between provincial Journalists and the Fleet Street NUJ, as well as between 'moderate' journalists and the left—wing group that is powerful in the union. Whether a man of the left or the right wins this week's poll for the post of General Secretary, he will find himself in charge of a union that faces both schism and bankruptcy.

It is a good time therefore to ask whether Journalists really need a trade union, or even if journalism is really a trade in the sense of something one learns as an apprentice and works at until old age. The only Specific skill, shorthand, that a journalist was supposed to need has become of even less importance since the advent of tape recorders. It is a trade in the sense of 'know

ing the tricks of the trade' in obtaining information, conducting interviews and putting an article into the right order, but even these things cannot be taught except by experience. The three most important qualities for a journalist — curiosity, quickness, and writing skill — cannot be taught at all.

Journalism is, or ought to be, very competitive, with each man anxious to get a new story, to get the Most interesting 'quotes', to write the wittiest headline or the most stirring editorial. There is, or should be competition within each paper as well as with its competitors. This spirit of competition pervades, or should pervade the trade and provincial press as much as it does the more glamorous world of Fleet Street, TV' and radio. The trade union movement, to put it mildly, does not encourage the spirit of competition. But does it achieve its principal object of getting better conditions and pay for its members?

Like most-British industries over the last twenty years, the press has tended to concentrate into fewer, larger units, each of them employing larger and often excessive staffs. This tendency gathered momentum during the boom of the late 1950s when competition was fierce for advertisements. and circulation and the richer newspapers like Beaverbrook's Daily Express, set out to achieve success by forcing their • poorer competitors out of business. The easiest method was to raise wages, allowances and fringe benefits to a level that poorer newspapers could not pay, so that the News Chronicle, Daily Herald, Daily Sketch, Reynolds News and Sunday Dispatch were closed. In the provinces, dozens of morning and evening newspapers folded leaving those that survived with a local monopoly.

The bigger newspapers, which were already overstaffed, hired some, though not all, of the journalists on the papers they had taken over. The NUJ claimed the credit for every pay rise given by rich newspapers without of course, taking the blame for people losing their jobs when newspapers went under. Wages continued to rise at about the rate of the rise in the cost of living until the last few years of statutory wage restraint when the NUJ turned its attention more to allowances and fringe benefits. For example, the Daily Mirror's Father of the Chapel, Stephen Turner, who was a candidate in this week's NUJ poll, told the Journalist magazine: 'Let's look at some of the Mirror benefits. Average salaries of around £7,000 a year; four—day week for most staff; four weeks' sabbatical holiday every four years on top of usual holidays; newspaper allowances of £6.15 a week; company cars for writers and photographers; subs (sub—editors) get £2.50 a shift allowance for disturbed meal'. And so on.

As one might detect from these boasts, especially that of the four—day week, the editorial staff of the Mirror, like most Fleet Street newspapers is grossly Overmanned. Overmanning ruins newspapers. People have not enough to do, they seldom get their work in print and their energies are absorbed by envious office politicking. Since everyone gets the finge benefits, there is no incentive to excel. This is seen at its worst in the BBC, where radio journalists recently went on strike in demanding payment for working 'unsocial hours', and where camera crews are obsessed by fiddling overtime money.

One of the reasons for the success of the Daily Mail is its relatively small staff, who are eager and see their articles in the paper. It is significant that at the time of the Barnsley dispute, a large number of Daily Mail journalists signed a letter opposing the closed shop.

If mergers and overmanning have had bad effects on the Fleet Street newspapers, they have been disastrous to the provincials. The Daily Mirror's NUJ candidate whom I have quoted went on to claim that benefit, such as his members enjoyed could be obtained by any newspaper staff. The example of Darlington indicates the opposite.

In the old days when there were two evening newspapers in most provincial cities also competing in the surrounding towns, the journalists were in a postion to threaten a strike in order to get more pay. Moreover, a journalist who thought he was worth more money could find a job with the rival paper or try for a job in Manchester or London. The Darlington newspaper group not only has a monopoly in the district but is part of a nation—wide chain of provincial papers, themselves only a small part of a powerful conglomerate. The NUJ with only a few weeks strike pay left, has no hope of winning a strike against such a powerful management.

It is illuminating to compare the state of British provincial,even Fleet Street newspapers with those in Ireland. Dublin, a city of 700,000 people, has three Sunday newspapers, three mornings and two evenings,