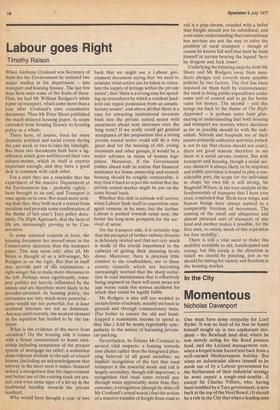 When Anthony Crosland was Secretary of State for the Environment he initiated two major studies in his department — into transport and housing finance. The last few days have seen some of the fruits of these. First, we had Mr William Rodgers's white paper on transport, which came more than a year after Crosland's own consultative document. Then Mr Peter Shore published the much-delayed housing paper, its scope extended from housing finance to housing policy as a whole.

There have, of course, been far more dramatic political and social events during the past week or two to take the limelight. But these two documents both have a significance which goes welhbeyond their own subject-matter, which in itself is anyway important enough; and they have a good deal in common with each other.

For a start they are a reminder that the experiment of the massive Department of the Environment has — probably rightly — been brought to an end, and Transport is once again on its own. But much more striking than that, they both mark a retreat from socialism and provide some confirmation of the theme of last year's Tory policy document, The Right Approach, that the facts of life are increasingly proving to be Conservative.

In some outward respects at least, the housing document has moved more in the Conservative direction than the transport paper. This may seem odd: after all, Mr Shore is thought of as a left-winger, 'Mr Rodgers as on the right. But that in itself may provide part of the explanation: a right-winger has to make more obeisance to the left. Perhaps more significantly, transport politics are heavily influenced by the unions and arc therefore more likely to be provider-oriented. In housing policy, the consumers are very much more powerful — some would say too powerful; but at least sectional interests are not so dominant. Anyway until recently, the weakest element in the equation has tended to be the taxpayer.

What is the evidence of the move from socialism? On the housing side it comes with a firmer commitment to home ownership including acceptance of the present system of mortgage tax relief; a somewhat more tolerant attitude to the sale of council houses (including an acknowledgment that anyway in the short term it makes financial sense); a recognition that the improvement and better use of the existing stock are crucial; and even some signs of a let-up in the traditional hostility towards the private landlord.

Who would have thought a year or two back that we might see a Labour government document saying that 'we need to consider what action can be taken to stimulate the supply of lettings within the private sector', that 'there is a strong case for speeding up procedures by which a resident landlord can regain possession from an unsatisfactory tenant', and above all that there is a case for attracting institutional investors back into the private rented sector with assurances about rent increases over the long term? If we really could get general acceptance of the proposition that a strong private rented sector could still do a very great deal for the housing of old, young, transients and other groups, it would be a major advance in terms of human happiness. Moreover, if the Government pushes ahead with its notion that financial assistance for home ownership and council housing should be roughly comparable, it may find it hard to reject the notion that the private rented market might be put on the same broad basis.

Whether this shift in attitude will survive when Labour finds itself in opposition once again remains to be seen; but the further Labour is pushed towards sense now, the better the long-term prospects for the survival of sense.

On the transport side, it is certainly true that the prospect of further railway closures is delicately skirted and that not very much is made of the crucial importance to the railways of getting their manning levels down. Moreover, there is precious little comfort to the roadbuilders, nor to those county councils which are becoming increasingly worried that the sharp reduction in road maintenance that is effectively being imposed on them will soon mean not just worse roads but serious accidents for which they could be legally liable.

Mr Rodgers is also still too wedded to certain forms of subsidy, notably on buses in general and through concessionary fares. (Far better to ensure the old and handicapped a reasonable income to spend as they like.) And he seems regrettably sym-. pathetic to the notion of harassing private car-parking.

Nevertheless, he follows Mr Crosland in several vital respects: a leaning towards user choice rather than the integrated planning beloved of all good socialists; an implicit recognition of the fact that road transport is the essential mode and rail is largely secondary, though still important; a recognition that road users overall pay through taxes appreciably more than they consume; a recognition (though he shies off Mr Crosland's actual words) that the notion of a massive transfer of freight from road to rail is a pipe-dream, coupled with a belief that freight should not be subsidised; and even some understanding that conventional bus services are not the way to solve the problem of rural transport — though of course he knows full well that here he finds himself in terrain bearing the legend 'here be dragons and Jack Jones'.

Underlying the faltering steps by both Mr Shore and Mr Rodgers away from manifesto pledges and towards more sensible policies lie two factors. The first has been imposed on them both by circumstances: the need to bring public expenditure under some sort of control and to go for better value for money. The second — and this brings me back to the theme of The Right Approach — is perhaps some faint glimmering of understanding that both housing and transport are matters where decisions as far as possible should lie with the individual. Schools and hospitals are of their nature primarily collective activities (which is not to say that choice should not exist); there are good reasons therefore to see them in a social service context. But with transport and housing, though a social service element is always likely to be required and public provision is bound to play a considerable part, the scope for the individual to shape his own life is still strong. Sir Reginald Wilson, in the best analysis of the fundamentals of transport that I have ever read, concluded that 'Birds have wings, and human beings have always aspired to a comparable freedom of movement. The coming of the small and ubiquitous and almost personal unit of transport of one kind and another makes it possible, for the first time, to satisfy much of this aspiration for free mobility'.

There is still a vital need to make this mobility available to old, handicapped and young; but this surely is the direction in which we should be pointing, just as we should be aiming for variety and freedom in the housing market.