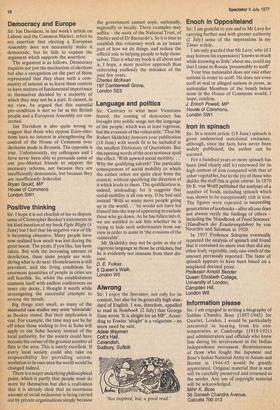 Sir: In a recent article (18 June) spinach is given undeserved nutritional eminence, although, since the facts have never been widely publicised, the author can be excused.

For a hundred years or more spinach has been (and clearly still is) renowned for its high content of iron compared with that of other vegetables, but to the joy of those who dislike the stuff this is quite untrue. In 1870 Dr E. von Wolff published the analyses of a number of foods, including spinach which was shown to be exceptionally rich in iron. The figures were repeated in succeeding generations of textbooks -after all one does not always verify the findings of others including the 'Handbook of Food Sciences' (Handbuch der Ernahrungslehre) by von Noorden and Saloman in 1920.

In 1937 Professor Schupan eventually repeated the analysis of spinach and found that it contained no more iron than did any other leafy vegetable, only one-tenth of the amount previously reported. The fame of spinach appears to have been based on a misplaced decimal point.