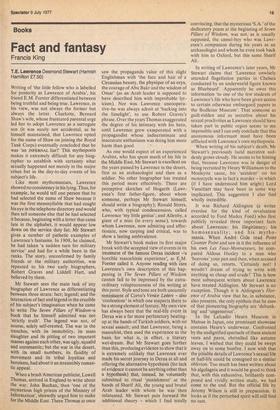 T.E. Lawrence Desmond Stewart (Hamish Hamilton E7.50) Writing of 'the little fellow who is labelled for posterity as Lawrence of Arabia', his friend E.M. Forster differentiated between being truthful and being true. Lawrence, in his view, was not always the former but always the latter. Charlotte, Bernard Shaw's wife, whose frustrated parental urge led her to adopt Lawrence as a surrogate son (it was surely not accidental, as he himself maintained, that Lawrence opted for the name of Shaw on joining the Royal Tank Corps) eventually concluded that he was 'an INFERNAL liar!' This mythopoeia makes it extremely difficult for any biographer to establish with certainty what actually happened not merely in the major crises but in the day-to-day events of his subject's life.

Like most mythomaniacs, Lawrence showed no consistency in his lying. Thus, for example, he would tell one person that he had selected the name of Shaw because it was the first monosyllable that had caught his eye in the telephone directory and would then tell someone else that he had selected it because, beginning with a letter that came late in the alphabet, it would appear low down on the service duty list. Mr Stewart gives a number of pathetic examples of Lawrence's fantasies. In 1908, he claimed, he had taken 'a sudden turn for military service' and had for a while been in the ranks. The story, unconfirmed by family friends or the military authorities, was repeated to his two early biographers, Robert Graves and Liddell Hart, and believed by them,

Mr Stewart sees the main task of any biographer of Lawrence as differentiating between three strata; fact; legend; and the interaction of fact and legend in the crucible of his subject's imagination when he came to write The Seven Pillars of Wisdom—a book that he himself admitted was not 'strictly truth'. The legend was not, of course, solely self-created. The war in the trenches, with its immobility, its mass slaughter and its pitting of two impotent masses against each other, was ugly, squalid and unromantic; but the war in the desert, with its small numbers, its fluidity of movement and its tribal loyalties and heroisms, had about it an irresistibly romantic appeal.

When a brash American publicist, Lowell Thomas, arrived in England to write about the war, John Buchan, then 'one of the 'mysterious high priests of the Ministry of Information', shrewdly urged him to make for the Middle East. There Thomas at once saw the propaganda value of this slight Englishman with 'the face and hair of a Circassian beauty, the physique of an oryx, the courage of Abu Bakr and the wisdom of Omar' (as an Arab leader iS supposed to have described him with improbable lyricism). Nor was Lawrence uncooperative—he was always adroit at 'backing into the limelight', to use Robert Graves's phrase. Over the years Thomas exaggerated the degree of his intimacy with his hero, until Lawrence grew exasperated with a propagandist whose indiscriminate and inaccurate enthusiasm was doing him more harm than good.

As one would expect of an experienced Arabist, who has spent much of his life in the Middle East, Mr Stewart is excellent on the years passed by Lawrence in the desert, first as an archaeologist and then as a soldier. No other biographer has treated this period more effectively. There are perceptive sketches of Hogarth (Lawrence's first father-figure, about whom someone, perhaps Mr Stewart himself, should write a biography); Ronald Storrs, who, with typical condescension, called Lawrence 'my little genius'; and Allenby, a giant of a man (in every sense), towards whom Lawrence, now admiring and affectionate, now carping and critical, was to show a lasting ambivalence.

Mr Stewart's book makes its first major break with the accepted view of events in its treatment of the famous Deraa incident --`a horrible masochistic experience, as EM. Forster called it. Anyone reading with Care Lawrence's own description of this happening in The Seven Pillars of Wisdom cannot fail to be impressed by the extraordinary voluptuousness of the writing at this point. Style and tone are both uncannily reminiscent of Corvo's Venice Letters — also 'confessions' in which one suspects there to be a strong element of fantasy. My own view has always been that the real-life event in Deraa was a far more perfunctory beatingup at the hands of Turkish soldiers, with no' sexual assault; and that Lawrence, being a masochist, then used the experience as the basis for what is, in effect, a literary wet-dream. But Mr Stewart goes further than this, producing evidence to show that it is extremely unlikely that Lawrence ever made his secret journey to Deraa at all and offering the alternative hypothesis (for lack of evidence it cannot be anything other than a hypothesis) that, instead, he voluntarily submitted to ritual `punishment' at the hands of Sherif Ali, the young and brutal Arab leader with whom he was then infatuated. Mr Stewart puts forward the additional theory — which I find totally convincing, that the mysterious `S.A.' of the dedicatory poem at the beginning of Seven Pillars of Wisdom, was not, as is usually supposed, the camel-boy who was Lawrence's companion during his years as an archaeologist and whom he even took back with him to Oxford, but this same Sharif Ali.

When writing of his subject's death, Mr Stewart's previously lucid narrative suddenly grows cloudy. He seems to be hinting that, because Lawrence was in danger of being recruited by Henry Williamson to the Mosleyite cause, his 'accident' on his motorcycle was in fact a murder — in which (if I have understood him aright) Lord Vansittart may have been in some way implicated. This suggestion I also find wholly incredible.

It was Richard Aldington (a writer overdue for the kind of' revaluation accorded to Ford Madox Ford) who first publicly revealed three important facts about Lawrence: his illegitimacy; his homosexuality; and his mythomania. When Andre Gide read Point Counter Point and saw in it the influence of his own Les Faux-Monnayeurs, he compared Aldous Huxley to a man who 'borrows' your pen and then, when accused of doing so, retorts, 'Certainly not! I woudn't dream of trying to write with anything so cheap and ,crude!' This is how most subsequent writers about Lawrence have treated Aldington. Mr Stewart is no exception. Though it is Aldington's Florence of Arabia view that he, in substance, also presents, the only epithets that he uses of that pioneering biography are 'debunking' and 'ungenerous'.

In the Lafcadio Hearn Museum in Matsue in Japan, one prominant showcase contains Hearn 's underwear. Confronted by the undignified spectacle of these ancient vests and pants, shrivelled like autumn leaves, 1 wished that they could be swept away on to some bonfire. I now wish that the pitiable details of Lawrence's sexual life or half-life could be consigned to a similar oblivion. Too much has been written about his algolagnia and it would be good to think that, with this exhaustive, brilliantly composed and vividly written study, we had come to the end. But the official life by Jeremy Wilson is still in preparation. It looks as if the perturbed spirit will still find no rest.