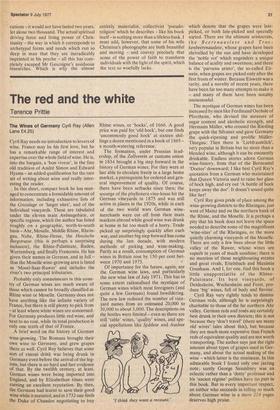 The red and the white

Cyril Ray needs no introduction to lovers of wine. France may be his first love, but he has a remarkable range of interest and expertise over the whole field of wine. He is, into the bargain, a 'bon 'viveur', in the fine old tradition of Andre Simon and Edward Hyams — an added qualification for the rare art of writing about wine and really interesting the reader.

In this short, compact book he has managed to concentrate a formidable amount of information, including exhaustive lists of the Grosslage or 'larger sites', and of the individual vineyards. These are tabulated under the eleven main Anbaugebiete, or specific regions, which the author has listed roughly on a geographic, north-to-south basis —Ahr, Moselle, Middle Rhine, Rheingau, Nahe, Rhine-Hesse, the Hessische Bergstrasse (this is perhaps a surprising inclusion), the Rhine-Palatinate, Baden, Wurtemberg, and finally Franconia. He has given their names in German, and in full — thus the Moselle wine-growing area is listed as `Mosel-Saar-Ruwer' and includes the river's two principal tributaries.

Probably only connoisseurs in this country of German wines are much aware of those which cannot be broadly classified as Rhine wine or Moselle. Germany does not have anything like the infinite variety of France, but there is still plenty to pick from — at least where white wines are concerned. For Germany produces little red wine, and next to no rose, while its total production is only one tenth of that of France.

A brief word on the history of German wine-growing. The Romans brought their own wine to Germany, and grew grapes there as well. Cyril Ray believes that some sort of vinous drink was being drunk in Germany even before the arrival of the legions, but there is no hard and fast evidence of that. By the twelfth century, at least, German wines were being imported into England, and by Elizabethan times were earning an excellent reputation. By then, the Germans had learnt to save their good wine while it matured, and in 1732 one finds the Duke of Chandos negotiating to buy Rhine wines, or 'hocks', of 1666. A good price was paid for 'old hock', but one finds 'uncommonly good hock' at sixteen shillings a dozen mentioned in a book of 1865 — a mouth-watering reference.'

The formation, under Prussian leadership, of the Zollverein or customs union in 1834 brought a big step forward in the history of German wines. For they were at last able to circulate freely in a large home market, a prerequisite for ordered and general improvement of quality. Of course, there have been setbacks since then; the scourge of the phylloxera vine-louse hit the German vineyards in 1875 and was still active in places in the 1920s, while in each of the two world wars German wine-, merchants were cut off from their main markets abroad while good wine was drunk at home in far too much of a hurry. Trade picked up surprisingly quickly after each war and another big step forward has come during the last decade, with modern methods of picking and wine-making. Partly as a result, consumption of German wines in Britain rose by 150 per cent between 1970 and 1975.

Of importance for the future, again, are the German wine laws, and particularly the new wine law of July 1971. This has to some extent rationalised the mystique of German wines which most foreigners (and quite a few Germans) found bewildering. The new law reduced the number of vineyard names from an estimated 20,000 to 30,000 to about 3,000. The descriptions on the bottles were limited — even so there are still 'table' wines, 'quality' wines, and special appellations like Spiitlese and Auslese which denote that the grapes were latepicked, or both late-picked and specially sorted. There are the ultimate aristocrats, the Beerenauslese and Trockenbeerenauslese, whose grapes have been shrivelled by the sun and have developed the 'noble rot' which engenders a unique balance of acidity and sweetness; and there is the 'parvenu aristo', the so-called Elswein, when grapes are picked only after the first frosts of winter. Because Eiswein was a rarity, and a novelty of recent years, there have been far too many attempts to make it — and many of them have been notably unsuccessful.

The mystique of German wines has been increased by men like Ferdinand Oechsle of Pforzheim, who devised the measure of sugar content and alcoholic strength, and Hermann Willer, who crossed the Riesling grape with the Silvaner and gave Germany the quick-ripening and prolific MullerThurgau: Then there is `Liebfraumilch', very popular in Britain but no more than a blended wine, although it can be eminently drinkable. Endless stories adorn German wine-history, from that of the Berncastel 'Doctor' downward; I like best Cyril Ray's quotation from a German who maintained that Queen Victoria used to raise her glass of hock high, and cry out 'A bottle of hock keeps away the doc'. It doesn't sound quite like her!

Cyril Ray gives pride of place among the wine-growing districts to the Rheingau, just west of Mainz and on the northern bank of the Rhine, and the Moselle. It is perhaps a pity that his book does not leave the space needed to describe some of the magnificent 'wine-sites' of the Rheingau, or the more quietly charming vineyards of the Moselle. There are only a few lines about the little valley of the Ruwer, whose wines are superb in years of much sunshine; there is no mention of those neighbouring estates and great rivals, Eitelsbach and Maximin Grunhaus. And I, for one, find this book a little unappreciatii/e of the RhinePalatinate. Its best vineyards, of Deidesheim, Wachenheim and Forst, produce 'big' wines, full of body and flavour.

Cyril Ray very rightly tends to dismiss German reds, although he is surprisingly charitable to those of the far northern A hr valley. German reds and roses are certainly best drunk in their own districts; this is not ' because they 'don't travel' (there are many old wives' tales about this), but because they are much more expensive than French reds of equivalent quality and are not worth transporting. The author says just the right amount about types of grapes used in Germany, and about the actual making of the wine —which latter is the minimum. In this admirable book I found only one jarring note; surely George Saintsbury was an eclectic rather than a 'dotty' professor and his 'ancien regime' politics have no part in this book. But in every important respect, an author who succeeds in telling so much about German wine in a mere 224 pages deserves high praise.