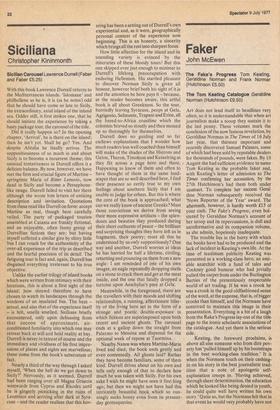 Sicilian Carousel Lawrence DurrelF(Faber and Faber £5.25) With this book Lawrence Durrell returns to the Mediterranean islands. 'Islomane' and philhellene as he is, it is (as he notes) odd that he should have come so late to Sicily, the extraordinary, axial island of the inland sea. Odder still, it first strikes one, that he should initiate the experience by taking a hasty package tour, the carousel of the title.

Did it really happen so? In the opening chapter, 'Arrival', he is there on the island; then he isn't yet. Shall he go? Yes. And despite Alitalia he finally arrives. The suppositiousness of so much in and about Sicily is to become a recurrent theme; this unusual tentativeness in Durrell offers it a delicate balance. By now, however, we have met the firm and crucial figure of Martine — springtime Marie of Bitter Lemons, now dead in Sicily and become a Persephonelike image. Durrell failed to visit her there although she wrote him letters of enticing description and invitation. Quotations from these read like Durrell on form: accept Martine as real, though here carefully veiled. The party of packaged tourists assembled at Catania are frankly fictional, and an enjoyable, often funny group of Durrellian fictions they are; but having myself suffered a similar giro by shiny little bus I can vouch for the authenticity of the over-all experience of the trip as described and the fearful precision of its detail. The fatiguing tour is fact and, again, Durrell has disguised everything irrelevant to his true objective.

Unlike the earlier trilogy of island books which were written from intimacy with their locations, this is about a first sight of the island: ,how shrewd therefore to have chosen to watch its landscapes through the windows of an insulated bus. The heat — actual, and also that of the experience itself — is felt, smells smelled, Sicilians briefly encountered, only upon debussing from that cocoon of approximate, airconditioned familiarity into which one may retreat back at will and hold reality at bay. Durrell is never in retreat of course and the immediacy and vividness of his first impressions of places and sights are marvellous; these come from the book's substratum of fact.

Nearly a third of the way through I asked myself, 'When the hell do we get down to Sicily?' Nervously, as it seemed, Durrell had been ranging over all Magna Graecia westwards from Cyprus and Rhodes until he is gingerly picnicking in the ruins of Leontinoi and arriving after dark at Syracuse — and the reader realises that this hov

ering has been a setting out of Durrell's own experiential and, as it were, geographically personal context of the experience now beginning. This is an honesty, a sincerity which brings all the rest into sharpest focus.

How little affection for the island and its unending variety is evinced by the itineraries of these bloody tours! But this one skipped over just enough to minister to Durrell's lifelong preoccupation with enduring Hellenism. His startled pleasure to discover Norman Sicily is given all honour, however brief both his sight of itjs and the attention he here pays it — because, as the reader becomes aware, this artful book is all about Greekness, So the tour, hurriedly leaving Syracuse, peeps at Gela, Agrigento, Selinunte, Trapani and Erice, all the bared-to-Africa coastline which the colonists braved so stoutly and then messed up so thoroughly for themselves.

Durrell does no guiding and so far eschews explanations that I wonder how much readers less well coached than himself will make of the shades of the Hierons and Gelon, Theron, Timoleon and Kesselring as they flit across a page here and there. Happening to know of them and often to have thought of them in the same landscapes that are so well described here, I find their presence so eerily true to my own feelings about southern Sicily that I am unable to judge for others. But this is where the core of the book is approached; what can we really know of ancient Greeks? Must those convictions we derive from seeing their more expressive artifacts — the splendours and beauties they produced during their short outbursts of peace — the brilliant and surprising thoughts they have left us'in fragments, their poetry; must all this be understood by us only suppositiously? One way and another, Durrell worries at ideas he has harried for half a lifetime, circling, returning and pouncing on them from a new angle: I am reminded of one of his own images, an eagle repeatedly dropping shells on a stone to crack them and get at the meat inside, and the one that fatally dropped a tortoise upon Aeschylus's pate at Gela.

Meanwhile, in the foreground, there are the travellers with their moods and shifting relationships, a running, affectionate hilarity of the living here set in the form of a strange and poetic double-exposure in which fictions are superimposed upon both recent and ancient ghosts. The carousel ends at a gallop down the straight from Palermo to Messina and dispersal for the optional week of repose at Taormina.

Nearby Naxos was where Martine-Isprie lived and died; the book ends gently and even contentedly. All ghosts laid? Rather they have become familiars, some of them kind. Durrell drives about on his own.and tells only enough of that to declare how much he was taken with Sicily. For his own sake I wish he might have seen it first long ago; but then we might not have had this intricately beautiful book which so cunningly sucks honey even from its presentday grotesqueries.