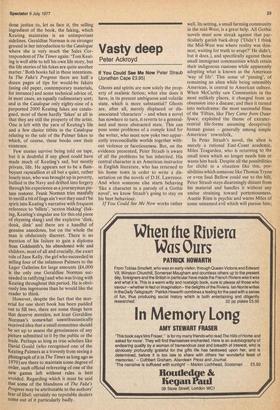 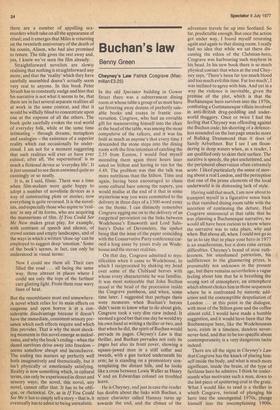 If You Could See Me Now Peter Straub (Jonathan Cape E3.95)

Ghosts and spirits are now solely the property of realistic fiction; what else does it have, in its present ambiguous and volatile state, which is more substantial? Ghosts are, after all, merely displaced or disassociated 'characters' — and when a novel has nowhere to turn, it reverts to a generalised and more abstracted state. This can pose some problems of a comple kind for the writer, who must now yoke two apparently irreconciliable worlds together without violence or facetiousness. But, on the evidence presented, Peter Straub is aware of all the problems he has inherited. His central character is an American instructor in English literature, who has returned to his home town in order to write a dissertation on the novels of D.H. Lawrence. And when someone else starts behaving 'like a character in a parody of a Gothic novel', we know Straub's going to stay on his best behaviour.

If You Could See Me Now works rather

well. Its setting, a small farming community in the mid-West, is a great help. All Gothic novels must now streak against that particularly garish back-drop ('Didn't I think the Mid-West was where reality was thinnest, waiting for truth to erupt?' He didn't, but it does.), and specifically against those small immigrant communities which retain their indigenous customs while apparently adopting what is known as the American `way of life'. This sense of 'passing', of remaining an alien while being ostensibly American, is central to American culture. When McCarthy saw Communists in the most unlikely places, it changed from an obsession into a disease; and then it turned into melodrama: the most successful films of the 'Fifties, like They Came from Outer Space, exploited the theme of extraterrestrial life-forms assuming deceptively human guises — generally among simple American townsfolk.

In Peter Straub's novel, the alien is merely a rational East-Coast academic, Miles Teagarden, who is returning to the small town which no longer needs him or wants him back. Despite all the possibilities for cliché in a situation like this, possibilities which someone like Thomas Tryon or even Saul Bellow could use to the hilt, Peter Straub stays disarmingly distant from his material and handles it without any undue straining toward portentousness. Auntie Rinn is psychic and warns Miles of some unnamed evil which will pursue him;

there are a number of appalling sexmurders which take on all the appearance of ritual; and it emerges that Miles is returning on the twentieth anniversary of the death of his cousin, Alison, who had also promised to return, The title gives the rest away and, yes, I know we've seen the film already.

Straightforward novelists are slowly realising that nothing is straightforward any more; and that the 'reality' which they have carefully assembled doesn't actually seem very real to anyone. In this book Peter Straub has to constantly nudge and hint that his narrative is not what it seems to be, that there are in fact several separate realities all at work in the same context, and that it would be wilfully blind to concentrate upon one at the expense of all the others. The book quite carefully evokes the real world of everyday folk, while at the same time intimating — through dreams, metaphors and analogies — the existence of a superior reality which can occasionally be understood. I am not for a moment suggesting that such realities will ever or have ever existed; after all, 'the supernatural' is as much a fictional device as 'everyday life'. It is just unusual to see them entwined quite so cunningly or so neatly.

It is, as I said, filmic. There was a time when film-makers were quite happy to adopt a number of novelistic devices as a way of constructing plots or stories; now everything is quite reversed. It is the novelists, and especially those who aspire to 'realism' in any of its forms, who are acquiring the mannerisms of film. If You Could See Me Now makes great play, for example, with contrasts of speech and silence, of crowd scenes and empty landscapes, and of the ways in which a written 'close-up' can be employed to suggest deep 'emotion.' Some of the book's scenes, in fact, can only be understood in visual terms:

Now I could see them all. Their cars filled the road . . . all facing the same way, three abreast in places where I could see only the tops of the farthest cars glinting light. From them rose wavy lines of heat.

But the resemblance must end somewhere. A novel which relies for its main effects on suspense and upon horror is at a considerable disadvantage because it doesn't have the immediate, consistent sensory presence which such effects require and which film provides. That is why the most shocking moments in this novel emerge as melodrama, and why the book's ending —when the dazed survivors drive away into freedom — seems somehow abrupt and inconclusive. The ending ties matters up perfectly well both imaginatively and thematically, but it isn't physically or emotionally satisfying. Reality is now something which, in cultural terms, can only be experienced in direct and sensory ways; the novel, this novel, any novel, cannot offer that. It has to be oblique, or rhetorical. Or, as in If You Could See Me it has to simply tell a story — that is, it eventually has to admit to being unrealistic.