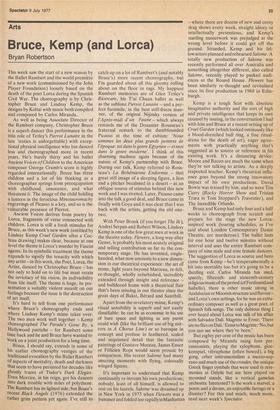 This week saw the start of a new season by the Ballet Rambert and the world premiere of a new work (commissioned by the John Player Foundation) loosely based on the death of the poet Lorca during the Spanish Civil War. The choreography is by Christopher Bruce and Lindsay Kemp, the designs by Koltai with music both compiled and composed by Carlos Miranda.

As well as being Associate Director of the Rambert company, Christopher Bruce is a superb dancer (his performance in the title role of Tetley's Pierrot Lunaire in the late 'sixties is unforgettable) with exceptional physical intelligence who has danced less and choreographed more in recent years. He's barely thirty and his ballet Ancient Voices of Children to the American composer George Crumb's score is highly regarded internationally. Bruce has three children and a lot of his thinking as a choreographer springs from preoceupation with childhood, innocence, and what threatens it. The image of the child holding a lantern in the ferocious Minotauromachy engravings of Picasso is a key, and so is the vulnerable presence of Pierrot. Ancient Voices derives from poetry by Lorca, fragments of verse connected with children. Lorca is still a fresh stimulus for Bruce, as this week's new work (entitled by Lindsay Kemp Cruel Garden after a Cocteau drawing) makes clear, because at one level the theme is Lorca's murder by Fascist agents. In its symbolic treatment the theme expands to signify the tenacity with which any artist –in this work, the Poet, Lorca, the Artist, danced by Christopher Bruce – has not only to hold on to life but must retain the inviolacy of his vision, its indivisibility from life itself. The theme is huge, its presentation a suitably violent assault on our. feelings because the issue is the destruction of art itself.

It's hard to tell from one performance where Bruce's choreography ends and Where Lindsay Kemp's mime takes over. The two men work well together – Kemp Choreographed The Parade's Gone By, a Hollywood pastiche – for Rambert some time back and he and Bruce have wanted to work on a joint production for a long time.

Bruce, I should say, extends in some of his earlier choreography vestiges of the traditional evocation by the Ballet Rambert of aspects of mortality, death and darkness that seem to have persisted for decades like ghostly traces of Tudor's Dark Elegies. Even Morrice, in his reign, got his dancers into dark trouble with miles of polythene. The Rambert has its lighted side; but Bruce's recent Black Angels (1976) extended the rather grim pattern yet again. I've still to catch up on a lot of Rambert's (and notably Bruce's) more recent choreography, but I'm guarded about all this gloomy rolling about on the ' floor in rags. My happiest Rambert memories are of Glen Tetley's Ricercare, his T'ai Chuan ballet as well as the sublime Pierrot Lunaire – and a perfect facsimile, in the best stiff-frieze manner, of the original Nijinsky version of l'Apres-midi d'un Faune – which always reminds me of the Douanier Rousseau's fraternal remark to the dumbfounded Picasso at the time of cubism: 'Nous sommes les deux plus grands peintres de l'epoque: toi dans le genre Egyptien— et moi dans le genre moderne'. I think of this charming madness again because of the nature of Kemp's partnership with Bruce. During our talk, Kemp referred to Rousseau's La Bohemienne Endormie – that great still image of a sleeping figure, a lion and a pitcher becalmed in a desert – as an oblique source of stimulus behind this new work and I was riveted. Later, Picasso came into the talk a good deal, and Bruce came in finally with Goya and it was clear that I was back with the artists, getting the old onetwo.

With Peter Brook (if you forget The lk), Andrei Serpan and Robert Wilson, Lindsay Kemp is one of the few great men at work in the theatre today. Flowers, a long way after Genet, is probably his most acutely original , and telling contribution so far to the contemporary stage. He has invented, singlehanded, what now amounts to a new dimension in our theatrical experience: the art Ot mime, light years beyond Marceau, re-felt, re-thought, wholly refurbished, incredibly extended through insight and reference – and bulldozed home with a theatrical flair that's been missing in our theatre since the great days of Bakst, Berard and Sainthill.

Apart from the revelatory mime, Kemp's visual sensibility is superb and not easily classifiable: he can be as economic in his use of bare space and lighting as any purist could wish (like the brilliant use of big mirrors in A Chorus Line) or so baroque in concept and profuse in feathered, scaled and sequinned detail that the fantastic paintings of Gustave Moreau, James Ensor or Felicien Rops would seem prosaic by comparison. His recent Salome had many amazing moments with flying, colossally winged figures.

It's important to understand that Kemp continually re-invents his 'own productions; nobody, least of all himself, is allowed to rest on his laurels. Salome was dreamed up in New York in 1973 when Flowers was a bummer and folded too rapidly in Manhattan where there are dozens of new and corny drag shows every week, straight idiocy or intellectually pretentious, and Kemp's startling masterwork was prejudged at the wrong level before it could get off the. ground. Stranded, Kemp and his fellow actors planned and rehearsed Salome. A totally new production of Salome was recently performed all over Australia and something altogether different, also called Salome, recently played to packed audiences at the Round House. Flowers has been similarly re-thought and revitalised since its first production in 1968 in Edinburgh.

Kemp is a tough Scot with absolute imaginative authority and the sort of high and private intelligence that keeps its own counsel by issuing, in the conversation I had with him and Bruce at a recent setting up of Cruel Garden (which looked ominously like a blood-drenched bull ring, a fine ritual, irena for the death of art), eager agreements with practically anything that's suggested as to source or reference in his existing work. It's a distancing device: Moore and Bacon are much the same when they're not talking to artists. As a deeply respected teacher, Kemp's theatrical influence goes beyond the strong innovatory impact of his own productions. David Bowie was trained by him, and so were Tim Curry (Rocky Horror Show and Tristan Tzara in Tom Stoppard's Travesties), and The Incredible Orlando.

Bruce and Kemp had only four and a half weeks to choreograph from scratch and prepare for the stage the new Lorcainspired work (touring schedules, as I've said about London Contemporary Dance Theatre, are murderous). The ballet lasts for one hour and twelve minutes without interval and uses the entire Rambert company of nine male and nine female dancers. The suggestion of Lorca as source and hero came from Kemp – he's temperamentally a bit into mortality too but it's going to be a dazzling exit. Carlos Miranda has used, sparely, fifteenthand sixteenth-century religious music of the period (of Ferdinand and Isabella), there is other music strong in Andalucian or Moorish structure and flavour– and Lorca's own settings, for he Was an extraordinary composer as well as a great poet, of Spanish folk-songs. The only dubious thing I ever heard about Lorca was talk of his affair with Salvador Dali. Magritte to Ernst: 'There are no flies on Dal i.' Ernst to Magritte: 'No, but you can see where they've been.'

But eighty per cent of the music has been composed by Miranda using four per cussionists, playing the xylophone, gloc kenspiel, vibraphone (often bowed), a big gong, other instrumentalists a mezzo-sop

rano and much use of the crotales, the antique

mounted stands, like a vertical gamelan orchestra. Interested? Is the work a marvel, a poem and a dream, an enjoyable farrago or a disaster? For this and much, much more, read next week's Spectator.