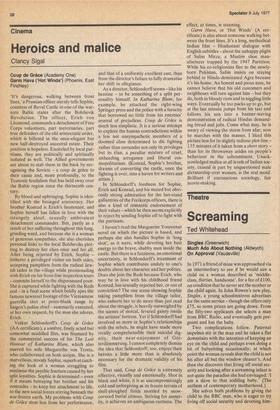 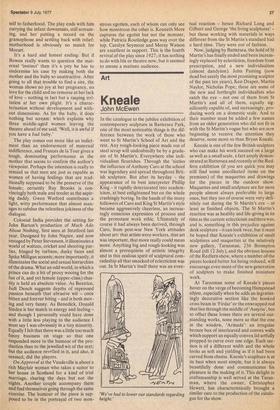 Singles (Greenwich) Much Ado About Nothing (Aidwych) On Approval (Vaudeville) In 1971 a friend of mine was approached via an intermediary to see if he would sire a child on a woman described as 'middleclass, thirties, handsome', for a fee of £100, on condition that he never see the mother or the child again. In John Bowen's new play, Sing/es, a young schoolmistress advertises for the same service —though she offers only £75, so some prices are going down. From the fifty-two applicants she selects a man from BBC Radio, and eventually gets pre

gnant and has the baby. , Two complications follow. Paternal impulses stir in the man and he takes a flat downstairs with the intention of keeping an eye on the child and perhaps even doing a bit of babysitting occasionally; at which point the woman reveals that the child is not his after all but the window cleaner's. And then she discovers that living off social security and looking after a screaming infant is not quite the paradise she had envisaged: 'I am a slave to that sodding baby.' (The anthem of contemporary motherhood.) She solves both problems by giving the child to the BBC man, who is eager to try living off social security and devoting him self to fatherhood. The play ends with him carrying the infant downstairs, still screaming, and her putting a record on the gramophone and settling back with relief: motherhood is obviously no match for Mozart.

It's a hard and honest ending. But if Bowen really wants to question the maternal 'instinct' then it's a pity he has to undermine his case by making both the mother and the baby so unattractive. After going to all that trouble to find a sire, the woman shows no joy at her pregnancy, no love for the child and no remorse at her lack of love — nothing in fact but a rasping iratation at her own plight. It's a characterisation without development and without dimensions. As for the baby, it does nothing but scream: which explains why three middle-aged women leaving the theatre ahead of me said, 'Well, it is awful if you have a bad baby.'

The play comes out more like an indictment than an endorsement of maternal indifference, and Frances de la Tour gives a tough, dominating performance as the mother that seems to confirm the author's viewpoint. Perhaps the intention is really to remind us that men are just as capable as women of having feelings that are traditionally supposed to be the preserve of the female; certainly Ray Brooks is convincingly both male and tender as the aspiring daddy. Gwen Watford contributes a light, witty performance that almost manages to subdue the relentless jokiness of the dialogue.

Colonial India provides the setting for John Barton's production of Much Ado About Nothing, first seen at Stratford last year. Designed by John Napier, and now restaged by Peter Stevenson, it illuminates a world of waltzes, cricket and shooting parties, fringed by turbans, dusky faces and Spike Milligan accents; more importantly, it illuminates the social and sexual hierarchies of the drama. What an odd world, in which a prince can do a bit of proxy wooing for the fun of it, and yet female (upper-class) chastity is held an absolute value. As Beatrice, Judi Dench suggests depths of repressed passion beneath that abrasive wit — once bitten and forever biting — and is both moving and very funny. As Benedick, Donald Sinden is her match in energy and feeling — and though I personally could have done with a little less playing to the audience I must say I was obviously in a tiny minority. Equally I felt that there was a little too much funny business on stage so that one responded more to the humour of the production than to the jewelled wit of the text; but the audience revelled in it, and also, it seemed, did the players.

On Approval at the Vaudeville is about a rich Mayfair woman who takes a suitor to her house in Scotland for a kind of trial marriage, sharing the days but not the nights. Another couple accompany them and find themselves going through the same exercise. The humour of the piece is supposed to be in the portrayal of two mon

strous egotists, each of whom can only see how monstrous the other is. Kenneth More captures the egotist but not the monster, while Patricia Routledge goes way over the top. Carolyn Seymour and Moray Watson are excellent in support. This is the fourth revival of the play since 1927; it has nothing to do with life or theatre now, but it seemed to amuse a matinee audience.