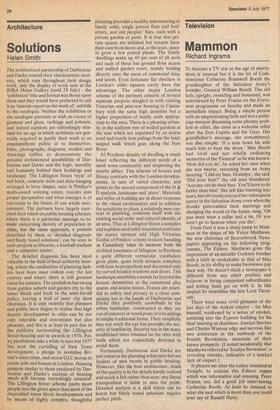 The architectural partnership of Darbourne and Darke extend their characteristic modesty, which runs throughout their design work, into the display of work now at the RIBA Heinz Gallery (until 29 July) — the 'exhibition' title and format was thrust upon them and they would have preferred to call it an 'interim report on the work of', subtitle to the catalogue. Neither the exhibition or the catalogue presents us with an excess of glamour and gloss, verbiage and polemic, and indeed captions are refreshingly minimal for an age in which architects are generally required to justify their work to an unsympathetic public or to themselves. Here, photographs, diagrams, models and drawings suffice to demonstrate the genuine architectural sensibilities of Darbourne and Darke and the logic, morality and humanity behind their buildings and landscape. The Lillington Street 'style' of red brick, concrete slabs and slate-hanging arranged in boxy shapes, seen in Pimlico's multi-award winning estate, recedes into proper perspective and what emerges is of relevance to the future of our whole environment. The partners have largely exercised their talent on public housing schemes where there is a particular message to be made concerning density of population in cities, but the same approach, a process described by them as 'detailed diagnosis and finely tuned solutions', can be seen in such projects as libraries, a football stadium and a computer centre.

The detailed diagnosis has been most valuable in the field of local authority housing, where the oscillations of planning fashion have been most violent over the last century and where there is still greatest cause for concern. The pendulum has swung from garden suburb and garden city to the tower block and back to the semi-for-all policy, leaving a trail of inner city slum clearance. It is only recently that planners and public have begun to realise that high density development in cities can be not only tolerable and convenient but also pleasant, and this is at least in part due to the publicity surrounding the Lillington Street housing and its awards in 1970. Policy pendulums take a while to turn but 1977 has seen the curtailing of New Town development, a pledge to revitalise Britain's inner cities, and recent GLC moves to create jobs and houses in London. Housing patterns similar to those produced by Darbourne and Darke's analysis of housing needs will become increasingly essential. The Lillington Street scheme packs more people into the given space than most of the discredited tower block developments and by means of highly complex, thoughtful

planning provides a healthy interweaving of family units, single person flats and bedsitters, and old peoples' flats, each with a private garden or patio. It is true that private spaces are minimal but tenants have their own front doors arid, at the least, space to grow a few potted plants. The family dwellings make up 40 per cent of all units and each of these has ground floor access and walled garden court, mainly leading directly onto the areas of communal trees and lawns. Even fortunate flat dwellers in London's older squares rarely have this advantage. The other major London scheme of the partners consists of several separate projects mingled in with existing Victorian and post-war housing in Canonbury with the same high densities but a higher proportion of family units appropriate to the area. There is a pleasing urbanity in the uniform row of walled gardens at the -rear which are separated by an access road and sturdy iron palings from the landscaped walk which goes along the New River.

At Pershore density of dwelling is much lower reflecting the different needs of a small town 'community and respecting the nearby abbey. This scheme of houses and library contrasts with the London developments, in turn of varied character, and points to the second component of the D & D analysis, landscape and 'place'. Materials and styles of building are in direct response to the visual environment and in addition the sensitivity to place, a relatively new concept in planning, concerns itself with the existing social order and cultural identify of an area. Thus at Lillington Street a complex and sophisticated cubic treatment confronts the stucco terraces add High Victorian Gothic of Pimlico: a more reticent handling in Canonbury takes its measure from the civilised towniness of Islington: in Pershore a quite different vernacular vocabulary gives plain, quiet brick terraces complete with lean-to projections and decorated only by curved headed windows and doors. This landscape sensibility extends far beyond the houses themselves to the. communal play spaces and access routes. Fences are essential to safety and privacy in a close community but in the hands of Darbourne and Darke they positively contribute to the urban landscape, constructed as they are out of concrete or wood posts or iron palings in simple traditional forms. Their simplicity may not catch the eye but provides the security of familiarity. Security too in the many established trees retained on the sites with walls which are respectfully diverted to avoid them.

Fortunately Darbourne and Darke are not voices in the planning wilderness but are leaders of new trends in public housing. However, like the best architecture, much of the quality is in the details hardly noticed and much is felt rather than seen: any literal transposition is liable to miss the point. Detailed analysis is a skill which an be learnt but finely tuned solutions require perfect pitch.