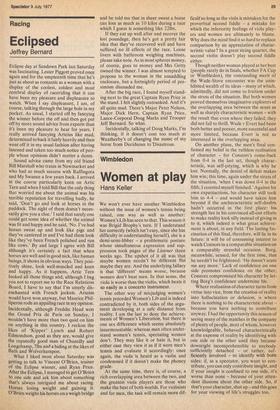 We won't ever have another Wimbledon without the issue of women's tennis being raised, one way as well as another: Women's Lib has seen to that. This season it was Brigid Brophy's turn. If I understand her correctly (which isn't easy, since she has difficulty in understanding herself), she is a demi-semi-libber — a problematic posture whose simultaneous expression and suppression took pages of the Listener three weeks ago. The upshot of it all was that maybe women needn't be different tfut maybe they are. And the underlying fallacy is that 'different' means worse, because women don't beat men. In that sense, the viola is wore than the violin, which beats it so easily as a concerto instrument.

The . other way of misjudging women's tennis preceded Women's Lib and is indeed contradicted by it, both sides of the argument developing at a safe distance from reality. I am the last to deny the achievenrients of Women's Liberation, but there is one sex difference which seems absolutely insurmountable: whereas men often understand women's tennis, spectating women don't. They may like it or hate it, but in either case they view it as if it were men's tennis and evaluate it accordingly: once again, the viola is heard as a violin and condemned if it doesn't make the phoney grade.

At the same time, there is, of course, a rich overlapping area between the two, and the greatest viola players are those who make the best of both Worlds. For violinists and for men, the task will remain more dif

ficulf so long as the viola is mistaken for the proverbial second fiddle — a mistake for which the inferiority feelings of viola players and women are ultimately to blame. Why does the mind find it so hard to replace comparison by an appreciation of characteristic value? In a great string quartet, the second violin doesn't play second fiddle either.

Though neither woman played at her best (people rarely do in finals, whether FA Cup or Wimbledon), the outstanding merit of the Wade-Stove encounter was the uninhibited wealth of its ideas — many of which, admittedly, did not come to fruition under the stress of the situation. But both women proved themselves imaginative explorers of the overlapping area between the sexes as well as sharply characteristic women — with the result that even where they failed, they did not fail to thrill. Wade v Evert had been both better and poorer, more successful and more limited, because Evert is not so interested in the overlapping area.

On another plane, the men's final confirmed my belief in the ruthless realisation of character — for Connors's come-back from 0-4 in the last set, though characteristic, was self-pitying, which is why he lost. Normally, the denial of defeat makes him win; this time, again under the stress of the situation, 'when I was down 0-4 in the fifth, I counted myself finished.' Against his own expectactions, his character still took him to 4-4 — and would have taken him beyond if the uncharacteristic self-doubts hadn't occurred in the first place: his strength lies in his convinced all-out efforts to make reality look silly instead of giving in to it, which indeed is what great achievement is about, in any field. The lasting fascination of this final, therefore, will lie in its future: it will be of consuming interest to watch Connors in a comparable situation on a comparably stressful occasion. Borg, meanwhile, sensed, for the first time, that he needn't be frightened: 'He doesn't scare me any more.' Lack of confidence on one side promotes confidence on the other; Connors compromised his character by letting Borg's confidence undermine his.

Where realisation of character turns from virtue into vice, from the creation of reality into hallucination or delusion, is where there is nothing to be characteristic about — because you have nothing to contribute anyway. I had the opportunity this season of seeing many of the matches in the company of plenty of people, most of whom, however knowledgeable, behaved characteristically at the expense of reality by identifying with one side or the other until they became downright incomprehensible to anybody sufficiently detached — or rather, sufficiently involved — to identify with both sides: if, as a spectator, you want to contribute, you can only contribute insight, and if your insight is confined to one side, it's worse than none — because of your attendant illusions about the other side. So, if that's your character, shut up —and this goes for your viewing of life's struggles too.