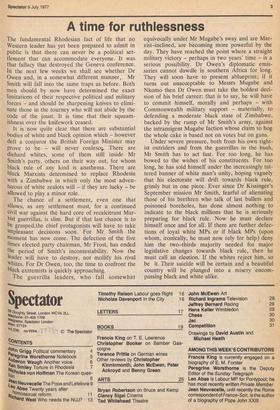 A time for ruthlessness

The fundamental Rhodesian fact of life that no Western leader has yet been prepared to admit in public is that there can never be a political settlement that can accommodate everyone. It was that fallacy that destroyed the Geneva. conference. In the next 'few weeks we shall see whether Dr Owen and, in a somewhat different manner, Mr Smith will fall into the same traps as before. Both men should by now have determined the exact limitations of their respective political and military forces — and should be sharpening knives to eliminate those in the tourney who will not abide by the code of the joust. It is time that their squeamishness over the knifework ceased.

It is now quite clear that there are substantial bodies of white and black opinion which — however deft a conjuror the British Foreign Minister may Prove to be — will never coalescep. There are diehard whites, some of them still inside Mr Smith's party, others on their way out, for whom black rule of any kind is anathema. There are black Marxists determined to replace Rhodesia With a Zimbabwe in which only the most adventurous of white zealots will — if they are lucky — be allowed to play a minor role.

The chance of a settlement, even one that allows, as any settlement must, for a continued civil war against the hard core of recalcitrant Marxist guerrillas, is slim. But if that last chance is to be grasped,the chief protagonists will have to take unpleasant decisions soon. For Mr Smith the moment has now come. The defection of the five times elected party chairman, Mr Frost, has ended the •period of Smith's incontestability. Now the leader will have to destroy, not mollify his rival Whites. For Dr Owen, too, the time to confront the black extremists is quickly approaching.

The guerrilla leaders, who fall somewhat equivocally under Mr Mugabe's sway and are Marxist—inclined, are becoming more powerful by the day. They have reached the point where a straight military victory — perhaps in two years' time — is a serious possibility. Dr Owen's diplomatic emissaries cannot dawdle in southern Africa for long. They will soon have to present ablueprint; if it turns out unacceptable to Messrs Mugabe and Nkomo then Dr Owen must take the boldest decision of his brief career: that is to say, he will have to commit himself, morally and perhaps — with Commonwealth military support — materially, to defending a moderate black state of Zimbabwe, backed by the rump of Mr Smith's army, against the intransigent Mugabe faction whose claim to hog the whole cake is based not on votes but on guns.

Utider severe pressure, both from his own rightist outriders and from the guerrillas in the bush, Mr Smith has to act fast. For, too long, he has bowed to the wishes of his constituents. For too long, he has sold himself under the increasingly tattered banner of white man's unity, hoping vaguely that his electorate will drift towards black rule, grimly but in one piece. Ever since Dr Kissinger's September mission Mr Smith, fearful of alienating those of his brethren who talk of last bullets and poisoned boreholes, has done almost nothing to indicate to the black millions that he is seriously preparing for black rule. Now he must declare himself once and for all. If there are further defections of loyal white MPs or if black MPs (upon whom, ironically, he must now rely for help) deny him the two—thirds majority needed for major legislative changes towards black rule, then he must call an election. If the whites reject him, so be it. Their suicide will be certain and a beautiful country will be plunged into a misery encompassing black and white alike.