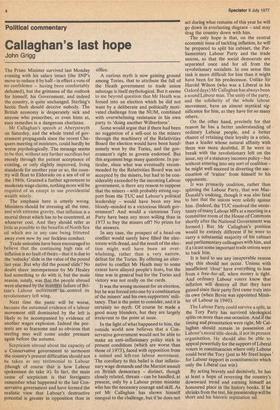 The Prime Minister survived last Monday evening with his salary intact (the SNP's move to reduce it by half -in effect a vote of no confidence having been comfortably defeated), but the grimness of the outlook for himself, his Government, and indeed the country, is quite unchanged. Sterling's hectic flush should deceive nobody. The British economy is desperately sick and anyone who prescribes, or even hints at, easy remedies is a dangerous charlatan.

Mr Callaghan's speech at Aberystwyth on Saturday, and the whole trend of government propaganda since the recent Chequers meeting of ministers, could hardly be worse psychologically. The message seems to be that, without any further sacrifices but merely through the patient acceptance of existing, or only slightly improved, living standards for another year or so, the country will float to Eldorado on a sea of oil in the 1980s. Granted a further agreement to moderate wage claims, nothing more will be required of us except to use providential wealth wisely.

The emphasis here is utterly wrong. Ministers-, should be stressing all the time, and with extreme gravity, that inflation is a mortal threat which has to be countered, at whatever cost. And they should refer as little as possible to the benefits of North Sea oil which are in any case being frittered away even now by our feckless conduct.

Trade unionists have been encouraged to believe that the continuing high rate of inflation is no fault of theirs -that it is due to the 'unlucky' slide in the value of the pound last year. But why did the pound slide? No doubt sheer incompetence by Mr Healey had something to do with it, but the main reason, surely, was that the people abroad were alarmed by the tnanif6t failure of Britain's Labour movement to—control its revolutionary left wing.

Next time the panic will be worse, because the autumnal evidence of a labour movement still dominated by the left is likely to be accompanied by evidence of another wages explosion. Indeed the portents are so fearsome and so obvious that sterling may well come under pressure again before the autumn.

Scepticism abroad about the capacity of a Conservative government to surmount the country's present difficulties should not be taken as any testimonial to Labour (though of course that is how Labour spokesmen do take it). In fact, the main cause of scepticism is that foreigners remember what happened to the last Conservative government and have formed the realistic view that Labour's destructive potential is greater in opposition than in office.

A curious myth is now gaining ground among Tories, that to attribute the fall of the Heath government to trade union sabotage is itself mythological. But it seems to me beyond question that Mr Heath was forced into an election which he did not want by a deliberate and politically motivated challenge fron the NUM, combined with overwhelming resistance in his own party to 'doing another Wilberforce'.

Some would argue that if there had been no suggestion of a sell-out to the miners through the machinery of the Relativities Board the election would have been hand= somely won by the Tories, and the government's right to govern endorsed. But this argument begs many questions. In particular, since what was eventually recommended by the Relativities Board was not accepted by the miners, but had to be considerably exceeded by the incoming Labour government, is there any reason to suppose that the miners with probably strong support from the TUC and Labour's political leadership would have been any less bloody-minded to a victorious Heath government? And would a victorious Tory Party have been any more willing than in 1973 to buy the miners off? No prizes for the answers.

In any case, the prospect of a head-on conflict would surely have filled the electorate with dread, and the result of the election might well have been an overwhelming, rather than a very narrow, defeat for the Tories. By offering an alternative to conflict Mr Heath may to some extent have allayed people's fears, but the time was in general bad for the Tories and victory was not really on the cards.

It was the wrong moment for an election, but he was forced into one by a combination of the miners' and his own supporters' militancy. That is the point to consider, and it is certainly no myth. Of course he made a good many blunders, but they are largely irrelevant to the point at issue.

In the light of what happened to him, the outside world now believes that a Conservative government would not be able to make an anti-inflationary policy stick in present conditions (which are worse than those of 1973), faced with opposition from a united and left-run labour movement. The corollary to this belief is that inflationary wage demands and the Marxist assault on British democracy distinct, though closely related, threats can be handled, at present, only by a Labour prime minister who has the necessary courage and skill. As yet Mr Callaghan has shown himself unequal to the challenge, but if he does not act during what remains of this year he will go down in everlasting disgrace and may drag the country down with him.

The only hope is that, on the central economic issue of tackling inflation, he will be prepared to split his cabinet, the Parliamentary Labour Party and the trade unions, so that the social democrats are separated once and for all from the revolutionary socialists. In one sense this task is more difficult for him than it might have been for his predecessor. Unlike Sir Harold Wilson (who was a Liberal in his Oxford days) Mr Callaghan has always been a sound Labour man. The unity of the party, and the solidarity of the whole labour movement, have an almost mystical significance for him, as they have for so many others.

On the other hand, precisely for that reason he has a better understanding of ordinary Labour people, and a better chance of retaining their loyalty in a crisis, than a leader whose natural affinity with them was more doubtful. If he were to break with the revolutionary left on the issue, say of a statutory incomes policy -but without entering into any sort of coalition he might well succeed in diverting the aaccusation of 'traitor' from himself to his opponents.

It was primarily coalition, rather than splitting the Labour Party, that was MacDonald's undoing, though it was also fatal to him that the unions were solidly against him. (Indeed, the TUC resolved the uncertainty of many Labour MPs at a meeting in a committee room of the House of Commons shortly after the National Government was formed.) But Mr Callaghan's position would be entirely different if he were to carry a substantial majority of his cabinet and parliamentary colleagues with him, and if at least some important trade unions were to back him.

It is hard to see any insuperable reason why this should not occur. Unions with insufficient 'clout' have everything to lose from a free-for-all, when money is tight. And ordinary Labour voters know that inflation will destroy all that they have gained since their party first came truly into ,its own (when Bevin was appointed Minister of Labour in 1940).

The Labour Party could survive a split, as the Tory Party has survived ideological splits on more than one occasion. And if the timing and presentation were right, Mr Callaghan should remain in possession of Labour's moral title-deeds, if not its present organisation. He should also be able to appeal powerfully for the support of Liberal voters in constituencies where only Labour could beat the Tory (just as Mr Steel hopes for Labour support in constituencies which only the Liberal can win).

By acting bravely and decisively, he has at least a hope of reversing the country's downward trend and earning himself an honoured place in the history books. If he shrinks from the test, his premiership will be short and his historic reputation nil.