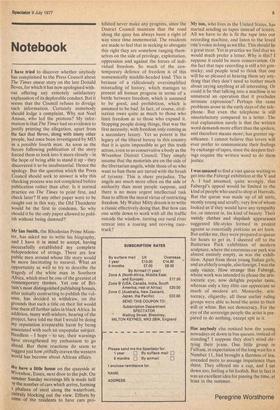 I have tried to discover whether anybody has complained to the Press Council about The Times smear story on the late Donald Beves, for which it has now apologised without offering any remotely satisfactory explanation of its deplorable conduct. But it seems that the Council refuses to divulge such information. Certainly somebody should lodge a complaint. Why not Noel Annan, who led the protests? My information is that The Times had no evidence to justify printing the allegation, apart from the fact that Beves, along with many other people, had once been investigated by MI5 as a possible fourth man. As soon as the furore following publication of the story forced them to look into it more closely — in the hope of being able to stand it up — they discovered it to be insubstantial. Hence the apology. But the question which the Press Council should seek to answer is why this checking process was not completed before publication rather than after. Is it normal practice on The Times to print first, and check later? If any other paper were to be caught out in this way, the Old Thunderer would be the first to condemn. So why should it be the only paper allowed to publish without being damned?

Mr Ian Smith, the Rhodesian Prime Minister, has asked me to write his biography, and I have it in mind to accept, having successfully established my complete independence of strings. There are few public men around whose life story would be more fascinating to unravel. What an ,opportunity as well to try to describe the tragedy of the white man in Southern Africa, which must be one of the greatest of contemporary themes. Yet one of Britain's most distinguished publishing houses, after initially contracting to publish the volume, has decided to withdraw, on the grounds that such a title on their list would lose them all further sales in black Africa. In addition, many well-wishers, hearing of the project, have told me that I would be doing my reputation irreparable harm by being associated with such an unpopular subject. Needless — I hope — to say, their warnings have strengthened my enthusiasm to go ahead. But these reactions do seem to suggest just how pitifully craven the western world has become about African affairs.

We have a little house on the quayside at Wivenhoe, Essex, next door to the pub. On Summer Sunday mornings life is made hell 3y the number of cars which arrive, forming

phalanx of steel along the waterfront, .tntirely blocking out the view. Efforts by ;mile of the residents to have cars pro

hibited never make any progress, since the District Council maintain that the road along the quay has always been a right of way since time immemorial. The residents are made to feel that in seeking to abrogate this right they are somehow ranging themselves on the side of privilege, exploitation, oppression and against the forces of individual freedom. So much of the contemporary defence of freedom is of this nonsensically muddle-headed kind. This is because of a ridiculously oversimplified misreading of history, which manages to present all human progress in terms of a battle between freedom, which is assumed to be good, and prohibition, which is assumed to be bad. In fact, of course, civilisation owes quite as much to those who limit freedom as to those who expand it. Stopping people doing things, that was the first necessity, with freedom only coming as a secondary luxury. Yet so potent is the legacy of the liberal heresy in this country that it is quite impossible to get this truth across, even to so conservative a body as the Wivenhoe District Council. They simply assume that the motorists are on the side of the libertarian angels, while those of us who want to ban them are tarred with the brush of tyranny. This is sheer prejudice. The angels are much more often on the side of authority than most people suppose, and there is no more urgent intellectual task than to affirm the moral virtue of restricting freedom. My Walter Mitty dream is to write a classic effectively doing that. But how can one settle down to work with all the traffic outside the window, turning our rural river retreat into a roaring and revving racetrack?

My son, who lives in the United States, has started sending us tapes instead of letters. All we have to do is fit the tape into our recording machine, and listen to the loved one's voice as long as we like. This should be a great treat. Yet in practice we find that we would much prefer a letter. Why is this? I suppose it could be mere conservatism. Or the fact that tape recording is still a bit gimmicky; and people tend to think that one will be so pleased at hearing them say anything that they don't need to bother much about saying anything at all interesting. Or could it be that talking into a machine is so unnatural an operation that it precludes intimate expression?. Perhaps the same problems arose in the early days of the telephone. But even the telephone is still unsatisfactory compared to a letter. The real explanation surely is that the written word demands more effort than the spoken, and therefore means more; has greater significance. I cannot believe that lovers will ever prefer to communicate their feelings by exchange of tapes, since the deepest feelings require the written word to do them justice.

I was amazed to find a vast queue waiting to get into the Faberge exhibition at the V and A. I had assumed, quite wrongly, that Faberge's appeal would be limited to the kind of people who used to shop at Harrods. But the queue was made up of all sorts,, mostly young and scruffy, very few of whom looked as if they would have any sympathy for, or interest in, his kind of beauty. Their untidy clothes and slapdash appearance suggested life-styles formed in protest against so essentially pre'cious an art form. But unlike me, they were prepared to queue for hours to get in. I sheered off to the Battersea Park exhibition of modern sculpture, where the enormous car park was almost entirely empty, as was the exhibition. Apart from three young Italian girls, and an elderly couple, also foreign, I was the only visitor. How strange that Faberge, whose work was intended to please the aristocratic eye, now delights popular taste, whereas only a tiny elite can appreciate so much of • modern art. Monarchy, aristocracy, oligarchy, all these earlier ruling groups were able to bend the artist to their will or whim. But not democracy. For the eye of the sovereign people the artist is prepared to do nothing, except spit in it.

Has anybody else noticed how the young nowadays sit down in bus queues, instead of standing? I suppose they don't mind dirtying their jeans. One little group in Fulham, in expectation of the long wait for a Number 11, had brought a thermos of tea, intended more to assuage impatience than thirst. They offered me a cup, and I sat down too, feeling a bit foolish. But in fact it was an excellent idea for passing the time, at least in the summer.