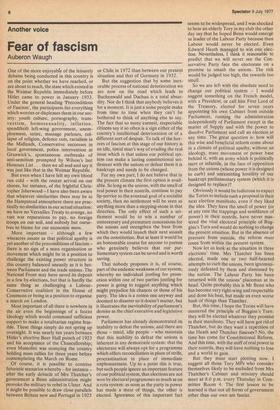 One of the more enjoyabre of the leisurely debates being conducted in this country is on the point whether we have reached, or are about to reach, the state which existed in the Weimar Republic immediately before Hitler came to power in January 1933. Under the general heading 'Preconditions of Fascism', the participants list everything which worries or displeases them in our society: youth culture, pornography, transvestism, homosexuality, inflation. spendthrift left-wing government, unemployment, satire, massage parlours, collapse of religion, defence cuts, racialism in the Midlands, Conservative successes in local government, police intervention at Grunwiek's, spontaneous outbreaks of anti-semitism prompted by Wilson's last Honours List . . then we all nod and say it was just like that in the Weimar Republic.

But even when I have felt my own blood run cold — with the recent arrival on our shores, for instance, of the frightful Christopher Isherwood — I have also been aware ,that whatever similarities there may be in ,the Hampstead atmosphere there are practically no similarities in our actual situation: we have no Versailles Treaty to avenge, no vast war reparations to pay, no foreign troops on our soil, and nobody but ourselves to blame for our economic mess.

More important — although a few wiseacres assure us that political apathy is yet another of the preconditions of fascism — there is no sign of a mass organisation or movement which might be in a position to challenge the existing power structure in , this country balanced uneasily as it is between Parliament and the trade unions. The , National Front may have saved its deposit , in a, few by-elections, but that is hardly the same thing as challenging a LabourConservative coalition in the House of Commons or being in a position to organise a march on London.

Most important of all there is nowhere in the air even the beginnings of a fascist ideology which would command sufficient support to make a totalitarian regime feasible. These things simply do not spring up overnight. It was nearly ten years between Hitler's abortive Beer Hall putsch of 1923 and his acceptance of the Chancellorship; even Mussolini was stomping the country holding mass rallies for three years before contemplating the March on Rome.

Of course, it is possible to contrive futuristic scenarios whereby — for instance after the early debacle of Mrs Thatcher's government a Benn administration might provoke the military to rebel in Ulster. And it might be possible to draw close parallels between Britain now and Portugal in 1925 or Chile in 1972 than between our present situation and that of Germany in 1932.

But the suggestion that by some inexorable process of national deterioration we are now on the road which leads to Buchenwald and Dachau is a total absurdity. Nor do I think that anybody believes it for a moment. It is just a noise people make from time to time when they can't be bothered to think of anything else to say. The fact that so many earnest, respectable citizens say it so often is a sign either of the country's intellectual deterioration or of a different sort of despair. To talk of the horrors of fascism at this stage of our history is an idle, timid man's way of evading the real issue which is that unless our political system can make a lasting constitutional settlement with the unions or defeat theni it is bankrupt and needs to be changed.

For my own part, I do not believe that in the present climate the first option is available. So long as the unions, with the smell of real power in their nostrils, continue to pay lip-service to the eventual goal of a socialist society, then no settlement will be seen as anything more than a stepping-stone in that direction. The only effect of such a settlement would be to win a number of unnecessary and premature concessions for the unions and strengthen the base from which they would launch their next assault on the constitution. But at least it would be an honourable course for anyone to pursue who genuinely believes that our parliamentary system can be saved and is worth saving.

That nobody proposes it is, of course, part of the endemic weakness of our system, whereby no individual jostling for promotion within one of two parties jostling for power is going to suggest anything which might prejudice his chances or those of his party. The idea is a rotten one anyway and doomed to disaster so it doesn't matter, but it illustrates the inevitability of parliament's demise as the chief executive and legislative power.

Parliament has already demonstrated its inability to defeat the unions, and there are those — timid, idle people — who maintain that this inability to defeat the unions is inherent in any democratic system: that the electorate will always opt for a programme which offers reconciliation in place of strife, procrastination in place of immediate unpleasantness. Up to a point this is true, but such people ignore an important feature of our political system, that elections are not won by electoral programmes so much as on a rota system: as soon as the party in power has made a mess of things, the other is elected. Ignorance of this important fact seems to be widespread, and I was shocked to hear an elderly Tory in my club the other day say that he hoped Benn would emerge as leader of the Labour Party because then Labour would never be elected. Even Edward Heath managed to win one election. Nevertheless, I think it reasonable to predict that we will never see the Conservative Party face the electorate on a promise to smash the unions. The risk would be judged too high, the rewards too small.

So we are left with the absolute need to change our political system — I would suggest something on the French model, with a President, or call him First Lord of the Treasury, elected for seven years appointing his own Cabinet from outside Parliament, running the administration independently of Parliament except in the matter of Supply and with the power to dissolve Parliament and call an election at any time. The great question is: how will this wise and beneficial reform come about in a climate of political apathy, without an ideology, mass movement or power base behind it, with an army which is politically inert or infantile, in the face of opposition from the unions (whose power it is designed to curb) and unremitting hostility of our bankrupt parliamentary system (which it is designed to replace)?

Obviously it would be ludicrous to expect the Tories to include such a proposal in their next election manifesto, even if they liked the idea. They have the smell of power (or at any rate the trappings and semblance of power) in their nostrils, have never mastered the vital electoral principle of Buggins's Turn and would do nothing to change the present situation. But in the absence of pressure from outside, the reform must come from within the present system.

Now let us look at the situation in three elections' time Mrs Thatcher has been elected, made one or two half-hearted attempts to curb the unions, been ignominiously defeated by them and dismissed by the nation. The Labour Party has been returned with the unions' placeman at its head. Quite probably this is Mr Benn who has become very right-wing and respectable and done his best, but made an even worse hash of things than Thatcher.

But, this time, I hope the Tories will have mastered the principle of Buggins's Turn: they will be elected whatever they promise in their manifesto. They will have got rid of Thatcher, but do they want a repetition of the Heath and Thatcher fiascoes? No, the time has come for Constitutional Reform. And this time, with the sniff of real power in their nostrils, they will have nothing to lose and a world to gain.

But they must start plotting now. I suggest all those Tory MPs who consider themselves likely to be excluded from Mrs Thatcher's Cabinet and ministry should meet at 8.0 p.m. every Thursday in Committee Room 4. The first lesson to be learned is that not all forms of government other than our own are fascist.