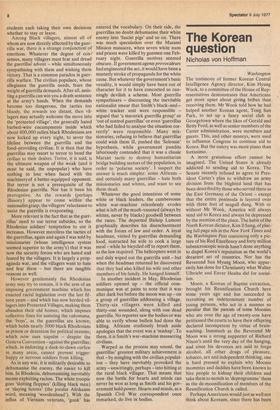 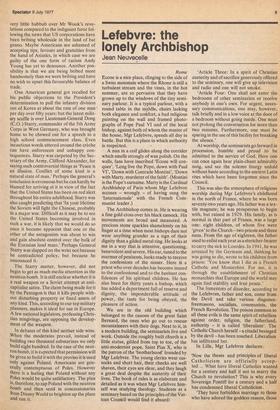 Washington The testimony of former Korean Central Intelligence Agency director, Kim Hyung Wook, to a committee of the House of Representatives demonstrates that Americans get more upset about giving bribes than receiving them. Mr Wook told how he had helped another Korean agent, Tong Sun Park, to set up a fancy social club in Georgetown where the likes of Gerald and Betty Ford, as well as senior members of the Carter administration, were members and guests. This, and other moneys, were used to influence Congress to continue aid to Korea. But the outcry was more piano than fortissimo.

A more gratuitous effort cannot be imagined. The United States is already addicted to sending aid to Korea. The Senate recently refused to agree to President Carter's plan to withdraw an army division from the blighted land that has been described by those who served there as the East Germany of the Orient except that the entire peninsula is layered over with three feet of seagull dung. With or without Mr Wook, America will always send aid to Korea and always be depressed by the mention of the place. The habit of the North Korean dictator, Kim II Sung, of placing full page ads in the New York Times and the Washington Post containing only a picture of his Red Excellency and forty million submicroscopic words hasn't done anything to dispel Korea's reputation as the world's dreariest set of countries. Nor has the Reverend Sun Myung Moon, who apparently has done for Christianity what Walter Ulbricht and Enver Hoxha did for socialism.

Moon, a Korean of Baptist extraction, brought his Reunification Church here some years ago and has succeeded in recruiting an indeterminate number of young persons, who act in a manner so peculiar that the parents of some Moonies who are over the age of twenty-one have petitioned the courts to have their offspring . declared incompetent by virtue of brainwashing. Inasmuch as the Reverend Mr Moon was a strong supporter of Richard Nixon's until the very day of the hanging, and since his devotees are said to forgo alcohol, all other drugs of pleasure, tobacco, sex and independent thinking, one is hard pressed to explain why Moonie mommies and daddies have been known to hire people to kidnap their children and take them to motels to `deprogramme' them as the de-moonification of members of the Reunification Church is called.

Perhaps Americans would just as well not think about Koreans, since there has been

been bribing wholesale in the land of bat guano. Maybe Americans are ashamed of accepting tips, favours and gratuities from the hand of Asiatics, in which case we are guilty of the one form of racism Andy Young has yet to denounce. Another possibility is that we are being bribed more handsomely than we were bribing and have no wish to upset this favourable balance of trade.

One American general got recalled for his public objections to the President's determination to pull the infantry division out of Korea at about the rate of one man' per day over fifty years: but the latest military scuffle is over Lieutenant-General Dong (C.O.) Starry, commander of the 5th Army Corps in West Germany, who was brought home to be chewed out for a speech to a high school commencement class. Even incautious words uttered around the crèche can have unforeseen and unhappy con sequences. Starry was carpeted by the Sec retary of the Army, Clifford Alexander, for saying such controversial things as 'Peace is an illusion. Conflict of some kind is a natural state of man.' Perhaps the general's conclusion is erroneous but he can hardly be blamed for arriving at it in view of the fact that the United States has been on red alert throughout his entire adulthood. Starry was also caught predicting that 'In your lifetime the Soviets will fight the Chinese, probably in a major war. Difficult as it may be to see the United States becoming involved in such a war, it is likely that we would do so once it became apparent that one or the other of the antagonists was about to win and gain absolute control over the bulk of the Eurasian land mass.' Perhaps General Starry was slapped on the wrist not because he contradicted policy, but because he announced it.

The Starry matter, however, did not begin to get as much media attention as the neutron bomb. It is still unclear whether it is a real weapon or a Soviet attempt at anticapitalist satire. The claim being made for it by the Pentagon is that it kills people with out disturbing property or fixed assets of any kind. This, according to our top military planners, makes it ideal for use in Europe. A few national legislators, professing Christian misgivings, are opposing the development of the weapon.

In debates of this kind neither side wins. When the moderates prevail, instead of building two thousand submarines we only build eight hundred. In the case of the neutron bomb, it is eApected that permission will be given to build it with the proviso it is used only against Poland. Americans are generally contemptuous of Poles. However there is a feeling that Poland without any Poles would be quite satiifactory. The plan IS, therefore, to zap Poland with the neutron bomb and then send in concessionaries from Disney World to brighten up the place and run it.