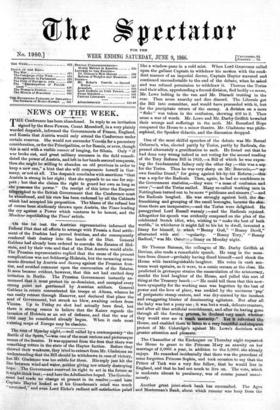 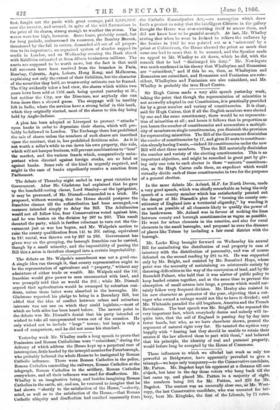 the price of its shares, strong enough to weather the

storm. The waves were too high, however. Some loans, probably sound, but for long periods, embarrassed its resources, the Bombay Branch, threatened by the fall in cotton, demanded aid out of all propor- tion to its importance, an organized system of slander sapped its credit in London, and on Wednesday evening the Bank closed with liabilities estimated at from fifteen to nineteen millions. The assets are supposed to be worth more, but the fact is that until full accounts have been received from the branches in Paris, Bombay, Calcutta, Agra, Lahore, Hong Kong, and Melbourne, explaining not only the extent of their liabilities, but the character of the securities they hold, no trustworthy estimate can be framed. The City evidently takes a bad view, the shares which within two years have been sold at 110/. each being quoted yesterday at Si., but neither the City, nor the Directors, nor anybody else can form more than a shrewd guess. The stoppage will be terribly felt in India, where the services have a strong belief in this bank, which they originally started, most of the shares to this day being held by Anglo-Indians.