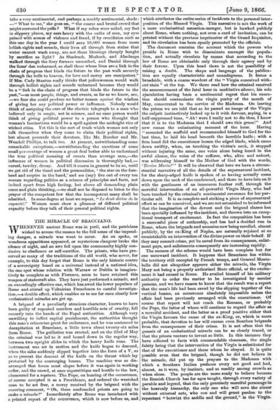 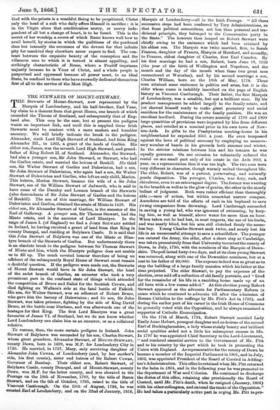 WHENEVER ancient Rome was in peril, and the patricians wished to arouse the masses to the full sense of the impend- ing danger, a miracle was wont to occur. An ox spoke, or wondrous apparitions appeared, or mysterious clangour broke the silence of night, and an awe fell upon the commonalty highly con- ducive to obedience or self-sacrifice. The priests, who have pre- served so many of the traditions of the old world, who never, for example, to this day forget that Rome is the only historic centre of a sovereignty based on a universal instead of a national idea, the one spot whose relation with Warsaw or Dublin is imagina- tively its complete as with Florence, seem to have retained this weapon of statecraft also. They have just performed a miracle, and an exceedingly effective one, which has awed the lower populace of Rome and stirred up Voltairian Frenchmen to careful investiga- tion,—a double effect, which enables us to see for once clearly how ecclesiastical miracles are got up.

A brigand of a peculiarly atrocious character, known to have been guilty of repeated murders and horrible acts of cruelty, fell recently into the hands of the Papal authorities. Although very unwilling to inflict capital punishment, the authorities thought this man's crimes too great for endurance, and he was sentenced to decapitation at Braeciano, a little town about twenty-six miles from Rome. The guillotine was erected, and on the 23rd of May the criminal was led to it and bound down in the regular way, between two upright slides in which the heavy knife runs. The instrument was set in motion and the knife began to descend, when the sides suddenly slipped together into the form of a V, so as to prevent the descent of the knife on the throat which lay protected by the converging beams. The machine was so dis- arranged that hours must elapse before it was again in working order, and the crowd, at once superstitious and hostile to the law, clamoured for a reprieve. The Pope, on hearing of the occurrence, of course accepted it as a Providence, and ordered the wretched man to be set free, a mercy received by the brigand with the sneering comment, "Oh, these confounded priests are going to make a miracle!" Immediately after Rome was inundated with a printed report of the occurrence, which is now before us, and

which attributes the entire series of incidents to the personal inter- position of the Blessed Virgin. This narrative is not the work of a mere ecclesiastical sensation-monger, but is hawked publicly about Rome, where nothing, not even a card of invitation, can be printed without the previous imprimatur of the Grand Inquisitor, and its circulation has been openly promoted by the officials.

The document contains the account which the powers who preside in Rome wish to disseminate amongst the popula- tion, and actually circulate by means that according to the law of Rome are obtainable only through their agency and by their favour. Upon this head there is not the possibility of raising a doubt. The shape and language of the publica- tion are equally characteristic and unambiguous. It forms a broadside, with a coarse woodcut of the "Virgin conceived with- out'stain " at the top. We there read how the criminal received the announcement of the fatal hour in meditative silence, his sole ejaculation having been a sentimental regret that his execu- tion should contaminate the virgin purity of the month of May, consecrated to the service of the Madonna. On leaving the prison we are told that as he passed an image of the Virgin the culprit instinctively looked up to it with fervour, saying, in a half-suppressed tone, " Ah ! were I really not to die thus, I know that it is to the Madonna that I should owe this grace!" And now comes the culminating moment of the hour. Having "mounted the scaffold and recommended himself to God for the last time, he laid his head beneath the horrible knife ; with a firm hand did the executioner loosen the edged blade, which came down swiftly, when, on touching the victim's neck, it stopped without injuring the same, one voice alone being heard in the awful silence, the voice of the sufferer, who, alive and unhurt, was addressing himself to the Mother of God with the words, '"Ervive Maria!" It will be observed that here we have a circum- stantial narrative of all the details of the supernatural incident, for the sharp-edged knife is spoken of as having actually come down upon the neck of the condemned, and there to have lain on it with the gentleness of an innocuous feather ruff, through the merciful intervention of an all-powerful Virgin Mary, who had been touched by the criminal's sentimental reverence for her par- ticular self. It is as complete and striking a piece of supernatural effect as can be conceived, and we are not astonished to be informed that the imagination of the devout and the brigand classes has been specially inflamed by the incident, and thrown into an excep- tional transport of excitement. In fact the composition has been a successful piece of authorship, and has had a decided run in Rome, where the brigands and assassins now being enrolled, almost publicly, by the ex-King of Naples, are naturally rejoiced at so unmistakable an intervention of the divine power on their behalf. If they may commit crime, yet be saved from its consequences, enlist- ment pays, and enlistments consequently are increasing rapidly.

The success of the scheme would have been complete but for one untoward incident. It happens that Bracciano lies within the territory still occupied by French troops, and General Monte- bello did not altogether approve either the miracle, the Virgin Mary not being a properly authorized State official, or the excite- ment it had caused in Rome. He availed himself of his military authority to order the matter to be investigated by secular persons, and we have reason to know that the result was a report that the man's life had been saved by the slipping together of the vertical beams, an occurrence absolutely impossible unless the affair had been previously arranged with the executioner. Of course that report will not reach the Romans, or probably the Pope, the latter of whom will continue to regard the affair as a merciful accident, and the latter as a proof positive either that the Virgin favours the cause of the ex-King, or, which is more probable, that devotion to her will excuse even Bourbon brigands from the consequences of their crime. It is not often that the genesis of an ecclesiastical miracle can be so clearly traced, or that the priests venture to invent so little. In this instance they have adhered to facts with commendable closeness, the single falsity being that the intervention of the Virgin is substituted for that of the executioner and those whom he obeyed. It is quite possible even that the brigand, though he did not believe in the miracle, did put up the prayers to the Madonna with which a Southern Italian prefaces every act good and bad, almost, as it were, by instinct, and as readily among crowds as when alone. The people are the more ready to believe because the Romish Church has for ages taught, through every variety of parable and legend, that the only genuinely merciful personage in the heavenly hierarchy, the only one who will save the sinner without external acts, who can and will grant pardon to the repentant "betwixt the saddle and the ground," is the Virgin.

God with the priests is a wrathful Being to be propitiated, Christ only the head of a cult who daily offers Himself in sacrifice ; it is in the Virgin alone that conditionless mercy, or mercy inde- pendent of all but a change of heart, is to be found. This is the secret of her worships a secret of which Rome knows well how to avail herself, by stories in which the guiltiness of the pardoned does but intensify the reverence of the devout for that infinite pity for mankind they elsewhere never expect to find. The con- trast between the exquisite beauty of the conception and the villanous uses to which it is turned is almost appalling, and strikingly characteristic of Rome, where a Pontiff imprisons unjustly because he is Vicar of Christ, and a whole people is pauperized and oppressed because all power must, in an ideal State, be confined to those who have avowedly dedicated themselves first of all to the service of the Most High.