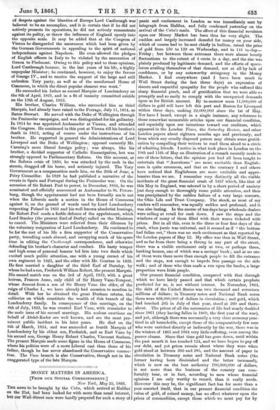 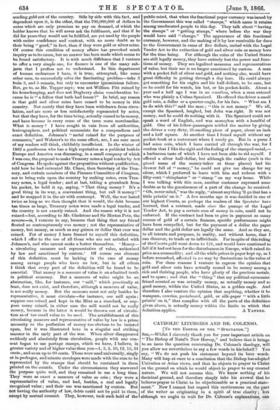 [FROM OUR SPECIAL CORRESPONDENT.] New York, May 25, 1866. THE news to be brought by the Cuba, which arrived at Halifax on the 21st, had been looked for with more than usual interest, but bar Wall-Street men were hardly.prepaied for such a story of panic and excitement in London as was immediately sent by telegraph from Halifax, and fully confirmed yesterday on the arrival of the Cuba's mails. The effect of this financial revulsion upon our Money Market has been thus far very slight. The sudden and largely increased demabd for money on your side, which of course had to be sent chiefly in bullion, raised the price of gold from 130 to 139 on Wednesday, and to 141 to-day- Friday ; but between these extremes there were almost hourly fluctuations to the extent of 4 cents. in a day, and the rise was plainly produced by legitimate demand, and the efforts of specu- lators availing themselves of that demand, not at all by lack of confidence, or by any noteworthy stringency in the Money Market. I find everywhere (and I have been much in Wall Street during the last three days) an expression of sincere and respectful sympathy for the people who suffered this sharp financial pinch, and of gratification that we were able so promptly and so easily to comply with the unexpected demands upon us for British account. By to-morrow noon 11,000,000 of dollars in gold will have left this port and Boston for Liverpool within three days, making 22,000,000 since the 1st of May. Nor have I heard, except in a single instance, any reference to those somewhat memorable articles upon our financial condition, and especially upon our intentions toward our creditors, which appeared in the London Times, the Saturday Review, and other London papers about eighteen months ago and previously, and from which any cruelly disposed person may obtain some gratifi- cation by compelling their writers to read them aloud to a circle of admiring friends. I notice in what took place in London on the 10th and 11th of May an illustration of a remark recently made in one of these letters, that the opinion you had all been taught to entertain that " Americans " are more excitable than English- men is quite erroneous, and that on the contrary I and others have noticed that Englishmen are more excitable and appre- hensive than we are. I remember very distinctly all the visible incidents of the great financial crash of 1857 which, like that of this May in England, was ushered in by a short period of anxiety just deep enough to thoroughly rouse public attention, and then was precipitated by the sudden failure of a very large concern, the Ohio Life and Trust Company. The shock, as most of my readers will remember, was equally sudden and profound, and it was also lasting. In the course of ten days large wholesale dealers were selling at retail for cash down. I saw the steps and the windows of many of them filled with their wares ticketed with prices. But in all this, even in the three or four first days of the crash, when panic was universal, and it seemed as if "the bottom had fallen out," there was no such excitement as that reported by the London papers of May 12. My office was then in Wall Street, and so far from there being a throng in any part of the street, there was a visible excitement only at two, or perhaps three, banking houses, one of which was a savings' bank ; and at no one of these were there more than enough people to fill the entrance and the steps, not enough to impede free passage on the side walk ; and of those who thus made a run upon the banks, a large proportion were Irish people.

Our present financial condition, compared with that through which we have lately passed and that which certain prophets predicted for us, is not without interest. In November, 1861, the debt of the United States was two thousand and seventeen millions of dollars ; in Treasury notes and National Bank notes there were 868,000,000 of dollars in circulation ; and gold, which had touched 285 in July of that year, stood at 260 and there- about. -The prices of all the necessaries of life had nearly doubled since 1861 (they having fallen in 1860, the first year of the war), and yet, although there was necessarily a very close economy prac- tised in all households, except those of the comparatively few men

who were enriched directly or indirectly by the war, there was in the winters of 1863 and 1864 very little suffering, even among the poorer classes. Since that time gold has gone down, until within

the past month it has touched 124, and we have begun to pay off our debt, and yet prices remain about where they were when gold stood at between 260 and 285, and the amount of paper in circulation in Treasury notes and National Bank notes (the former having been diminished and the latter increased), which is now on the best authority 700,000,000 of dollars, is not more than the business of the country can com- fortably bear, or in fact, according to men whose financial opinions I am only worthy to record, than it really needs.

However this may be, the significant fact has for more than a year asserted itself, that in our present financial condition the value of gold, of coined money, has no effect whatever upon the prices of commodities, except those which we must pay for by