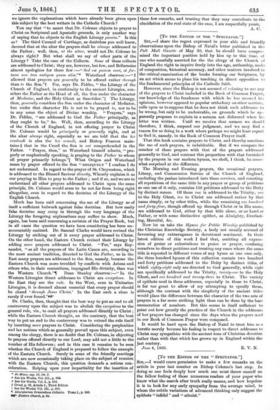 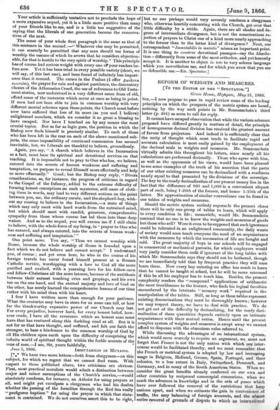 [To THE EDITOR OF THE "SPECTATOR."] SIR,—I would crave permission

to make a few remarks on the article in your last number on Bishop Colenso's last step. In doing so one feels deeply how much one must throw oneself on the fellow feeling of those numerous readers of your paper who know what the search after truth really means, and how hopeless it is to look for any early sympathy from the average mind, to whom the subtle variations of advanced thinking only suggest the epithets " infidel " and "atheist."

Your article is sufficiently tentative not to preclude the hope of a more expansive sequel, yet it is a little more positive than many of your friends like to see, and is a little too suggestive of the saying that the liberals of one generation become the conserva- tives of the next.

The sense of your whole first paragraph is the same as that of this sentence in the second :—" Whatever else may be permitted, it can scarcely be permitted that any man should use forms of worship the essence of which he avows that he considers objection- able, for that is hostile to the very spirit of worship." This principle has of course had serious weight with every one of your readers be- fore now. Yet it has been tried in every possible variety (short, we will say, of this last one), and been found of infinitely less import- ance than it seemed. The curses in the Psalms (I offer panavra ovytroho), the prayer for rain and against pestilence, the damnatory clauses of the Athanasian Creed, the use of references to Old Testa- ment stories, now understood in a very different sense from of old, afford some of the instances which occur at once as being in point. If men had not been able to join in common worship with very different mental schemes upon these points, the Church must before now have suffered that loss of its more (as you and I believe) enlightened members, which we consider it so great a blessing to have escaped. Nor have I touched on by any means the most crucial topics. But as far as logic goes, the position in which the Bishop now finds himself is precisely similar. To each of those who has been left in the rear on each of the above-mentioned sub- jects, the same impossibility of continued commtmion has seemed inevitable, but, we Liberals are thankful to believe, groundlessly.

Again, you say, "A church which believes in the Incarnation as a fact, must base its spiritual and devotional services on that teaching. It is impossible not to pray to One who has, we believe, entered into the secrets of human weakness and suffering and temptation, on purpose to reveal Himself more effectually and help us more effectually." Good ; but the Bishop may reply, "Divers considerations, as, for instance, the progress of criticism in regard to the Gospel of the Infancy, added to the extreme difficulty of forming honest conceptions on such mysteries, still more of cloth- ing them in words, may lead to very different notions on the point between you, me, the ordinary curate, and the shepherd-boy, with- out my ceasing to believe in the Incarnation,—a state of things which may only meet with hard words from the untrained mind, but which should meet with candid, generous, comprehensive sympathy from those whose course has led them into these deep waters. And as to the sequel, you will excuse me if I still claim to believe, with the whole force of my being, in prayer to One who has entered, and always entered, into the secrets of human weak- ness and suffering and temptation."

One point more. You say, "Thus we cannot worship with Rome, because the whole worship of Rome is founded upon a fact which we do not believe and cannot accept." I understand you, of course ; and yet even here, he who in the course of his foreign travels has never found . himself present at a Roman Catholic service, worshipping with a love to God all the more purified and exalted, with a yearning love for his fellow-men and fellow-Christians all the more intense, because of the antithesis between their earnest touching cries and gropings, and his own too on the one hand, and the eternal majesty and love of God on the other, has surely learned the comprehensive lessons of our time rather with his mind than with his heart.

I fear I have written more than enough for your patience. What the centuries may have in store for us none can tell, or how far the thankworthy expansive power of our Church may last. For every prejudice, however hard, for every honest belief, how- ever crude, I have all the reverence which an honest man must have that has ventured along this darkling road at all. But it is not for us that have thought, and suffered, and felt our faith the stronger, to base a hindrance to the common worship of God by all His children upon earth upon the difficulty of comprising the infinite world of spiritual thought within the feeble accents of the sons of men.—I am, Sir, yours faithfully, June 5, 1866. IMMUTABILIS IN MUTATIS. We have two more letters—both from clergymen—on this subject, for which we regret that we cannot find room. With respect to those published above, two criticisms are obvious. First, most practical moralists would admit a distinction between major and minor assumptions of the Church's service,—would absolutely condemn, for instance, an Atheist for using prayers at all, and might yet exculpate a clergyman who had his doubts whether the passing of the Israelites through the Red Sea really "prefigures baptism" for using the prayer in which that state- ment is contained. We do not ourselves assert this to be right,

but no one perhaps would very severely condemn a clergyman - who, otherwise heartily concurring with the Church, got over that little difficulty by a stride. Again, there are all shades and de- grees of intermediate divergence, but is not the conscientious re- jection of prayers to Christ one of a kind more nearly approaching to the former than to the latter kind of divergence? Next, our correspondent "Inunutabilis in mutatis" misses an important point. It is one thing to construe devotional passages—say the Absolu- tion — differently from some of the most orthodox, and yet honestly accept it. It is another to object in toto to very solemn language which you nevertheless use, and for which you avow that you see no defensible use.—En. Spectator.]