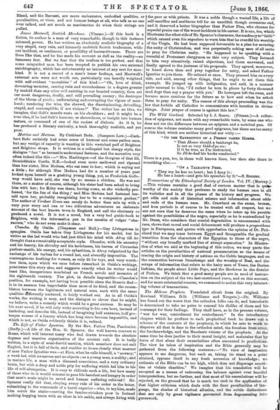 racterst," who do not even make it clear. race, shows

that moral and social debasement will produee a prognathous Chandos. By Oujda. (Chapman and Hall.)--Guy Livingstone in type in Europeans, and quotes with approbation the opinion of Dr. Prit- spangles. Ouida has taken Guy Livingstone for his model, but he chard that we may trace between Egypt and Senegambia the gradual writes as the lad would who had just filled his mind with Alroy till he transition from the characters of the Egyptian to those of the negro, thought that a conceivably acoeptable style. Chandos, with his ancestry "without any broadly marked line of abrupt separation." In illustra- and his beauty, his chivalry and his lavishness, his harem of Circassian tion of what we said at the beginning of this notice, we may quote the- parlour-maids, his energy, and his sybaritism, is Alroy vulgarized by the articles on the peculiarities of national pronunciation as the means of exchange of his turban for a round hat, and absurdly impossible. The tracing the origin and history of nations on the Celtic languages, and OG contemptuous loathing for women, as only fit for toys, and very worth- the connection between Stonehenge and the worship of Baal, and the less then, upon which we once before remarked in Oaida's writings, scraps of information that relate to the hairy men of Yesso, the Darien penetrates this story also, and suggests exactly what its writer would Indians, the people about Little Popo, and the Mookwas in the district least like, inexperience nourished on French novels and memoirs of of Pattern. We think that a good many, people are in need of instruc- the eighteenth century. The plot, in details impossible—Cliandoe's tion on the subject of the two last-mentioned races, and on this account, position, for example, not having been possible since the Stuarts fled— and for more substantial reasons, we commend to notice this very interest- is in its essence less improbable than most of its kind, and the resew- lug volume of transactions.