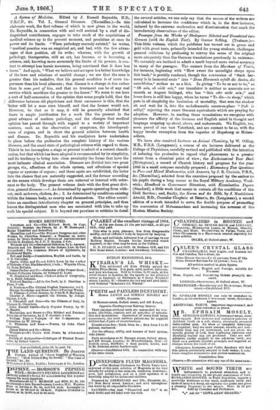 Page 23, 9 June 1866 — Passages from the Works of Shakspeare Selected and 2Swesktfed into-
Close

Passages from the Works of Shakspeare Selected and 2Swesktfed into-

German (with the English Text). By Gustav Selling. (Trubner.)— This little volume, which the publisher has turned out hi green and gold with great taste, primarily intended for young students, challenges general criticism by professing to convey the sense of the original more adequately than the German translations previously in exiateztoe. We certainly are inclined to admit a merit beyond mere verbal accuracy in many of the passages. The extract from the Merchant of Venice, for instance, beginning with "How sweet the moonlight sleeps upon this bank," is prettily rendered, though the conversion of "Such har- mony is in immortal souls" into "Dean Harmonic erfullt cfie Seelen, die unterblichen," strikes us as a blot In giving To he or not to be," as " Ob sets, oh nicht sein," our translator is neither so accurate not se smooth as August Schlegel, who has " Sein oder nie.ht set* ;" and lower down is still less happy, when he turns " To die—to sleep," which puts in all simplicitz the hesitation of mortality., that sees the shadow sit and wait for it, itito the melodramatic common-place " 7bde is schlaf," rejecting the exact German equivalents which are praying for adoption. However, in reading these translations we recognize with pleasure the affinity of the German and English mind in thought and language cropping up about, above, and underneath. We English, too, seem parcel of one vast Vaterland, and are content to be so, with the happy insular exemption from the vagaries of Hapsburg or Hohea- zollern.