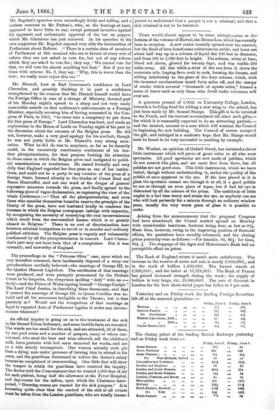 An official inquiry is going on as to the treatment

of the sick in the Strand Union Infirmary, and some terrible facts are revealed. The wards are too small for the sick, and are attended, 22 of them, by one paid nurse and a number of paupers, many of whom can- not read, who steal the beer and wine allowed, sell the children's milk, leave patients with bed sores unmoved for weeks, and are as a rule utterly incompetent. One woman actually stole gin from a dying man under pretence of turning him to attend to his sores, and the guardians threatened to reduce the doctor's salary because he complained of overcrowding. One little fact will show the temper in which the guardians have received the inquiry. The doctor told the Commissioner that he wanted 1,000 feet of air for each patient, being half the allowance at the Fever Hospital, and day-rooms for the infirm, upon which the Chairman inter- jected, "Drawing-rooms are wanted for the sick paupers." It is becoming quite clear that the control of the sick at all events must be taken from the London guardians, who are totally incom-

patent to understand that a pauper is not a crimival, anl that a sick criminal is not to be tortured.