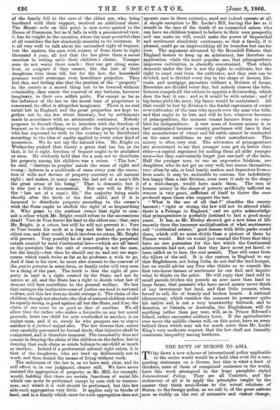 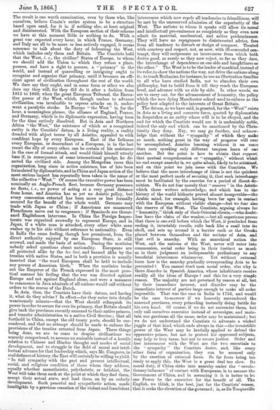 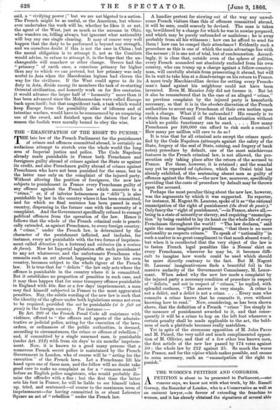 THE DUTY OF EUROPE TO ASIA.

TO lay down a new scheme of international policy applicable. to the entire world would be a bold idea even for a con- quering statesman on a throne, but this is what a knot of thinkers, none of them of recognized eminence in the world, have this week attempted in the huge pamphlet styled Intern.ationed Policy. They are all Comtists, and the endeavour of all is to apply the principles taught by the master they think semi-divine to the actual relations of States, to the foreign policy, as we call it, of the great nations now so visibly on the eve of extensive and violent change. The result is one worth evamination, even by those who, like ourselves, believe Comte's entire system to be a structure based upon sand, for it is, if nothing else, at least original and disinterested. With the European section of their scheme we have at this moment little or nothing to do. With a great war expected every hour, in which France, Germany, and Italy are all to be more or less actively engaged, it seems nonsense to talk about the duty of federating the West, which includes only them and Britain. The Comtists hold that the West, i. e., the civilize? States of Europe, to whom we should add the Union to which they refuse a place, possess, and have a right to possess, a "primacy" in the world, and instead of quarrelling or intriguing ought to recognize and organize that primacy, until it becomes an effi- cient agent of civilization throughout the rest of the world. We dare say they ought, and in some form or other we also dare say they will, for they did do it after a fashion from 1815 to 1860, when the great European Tribunal, the Execu- tive power of the West, which, though useless to advance civilization, was invaluable to repress attacks on it, under- went a paralytic stroke. In Europe "the West" is, for the hour, a meaningless phrase, the alliance of England, France, and Germany, which is its diplomatic expression, having been for the time entirely dissolved. But in Asia and Northern Africa "the West," the existence of which as a recognized entity is the Comtists' datum, is a living reality, a reality dreaded with abject terror by all Asiatics, appealed to with confident hope by every European. East of the Isthmus every European, or descendant of a European, is in the last resort the ally of every other, can be certain of his assistance in the case of formal attack, and would think himself utterly base if in consequence of some international grudge, he de- serted the civilized side. _ Among the Mongolian races this organization, long since in active existence, has of late been formulated by diplomatists, and in China and Japan action of the most serious import has repeatedly been taken in the name of the collective "West." Of course the executive power has been nominally an Anglo-French fleet, because Germany possesses no fleets, i. e., no power of acting at a very great distance from home, arid America has as yet no Asiatic policy, but every concession extorted has been more or less formally secured for the benefit of the whole world. Germans may trade with japan or China ; if Americans are massacred Frenchmen move out to vengeance ; if Spaniards are threat- ened Englishmen intervene. In China the Foreign Inspec- torate was organized avowedly to represent Europe, and in Japan, if a white man is attacked, every other white man rushes up to his side without reference to nationality. Even in India the same feeling, though less prominent, from the direct authority enjoyed by one European State, is still avowed, and made the basis of action. During the mutinies nobody asked questions about nationality. Europeans are all protected alike by the lex loci, and banned alike by the treaties with native States, and in both a provision is usually inserted that "the word European shall be held to include any person of American birth. When the mutinies broke out the Emperor of the French expressed in the most prac- tical manner his feeling that the war was directed against Europe and not against England alone, and were a massacre to commence in Java admirals of all nations would sail without orders to the rescue of the Dutch.