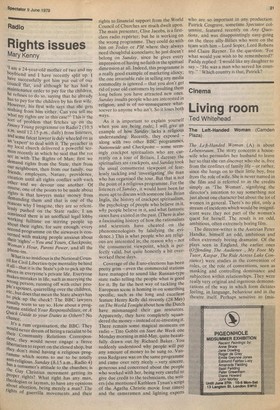 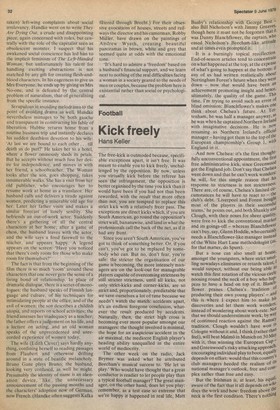 The Left-Handed Woman (Camden Plaza) The Left-Handed Woman (A) is about Lebensraum. The story concerns a housewife who persuades her husband to leave her so that she can discover who she is, free from the confines of family life — or rather, since she hangs on to their little boy, free from the role of wife. She is never named in the film and is referred to in the credits simply as 'The Woman', signifying the director's intention to say something not just about one character but about the lot of women in general. There's no plot, only a stream of incidents which would be insignificant were they not part of the woman's quest for herself. The result is an odd, ambitious, often extremely boring film.

The director-writer is the Austrian Peter Hancike, himself an odd, ambitious and often extremely boring dramatist. Of the plays seen in England, the earlier ones (Offending The Audience , My Foot My Tutor, Kaspar, The Ride Across Lake Constance) were studies in the convention of roles, or the role of conventions, seen as masking and controlling dominance and subjection within relationships. They were really very original and ingenious demonstrations of the way in which form dictates feeling, in language, behaviour and in the theatre itself. Perhaps sensitive to (mis taken) left-wing complaints about social irrelevancy. Handke went on to write They Are Dying Out, a crude and disappointing piece, again concerned with roles, but centrally with the role of the capitalist seen as obsolescent monster. I suspect that his awakened social conscience has led him to the implicit feminism of The Left-Handed Woman, but unfortunately his talent for handling exciting abstractions is not matched by any gift for creating flesh-andblood characters. In his eagerness to give us Mrs Everyone, he ends up by giving us Mrs No-one, and is defeated by the central problem of naturalism, that of generalising from the specific instance.

Scrupulous in avoiding melodrama to the point of avoiding drama as well, Handke nevertheless manages to be both gauche and transparent in constructing his fable of liberation. Hubbie returns home from a routine business trip and instantly declares his sudden deathless devotion to his wife: 'At last we are bound to each other. . . till death us do part?' He takes her to a hotel, where a flower ominously sheds its petals. But he accepts without much fuss her desire for independence, and moves in with her friend, a schoolteacher. The Woman looks after the son, goes shopping, takes innumerable walks. She has a visit from her old publisher, who encourages her to resume work at home as a translator. Her husband calls and delivers a tirade against women, predicting a miserable old age for her. Later her father visits and makes a similar forecast of lonely senility. She befriends an out-of-work actor. Suddenly there's a gathering of all the central characters at her home; after a game of chess, the husband leaves with the actor, and the wife says a fond farewell to the teacher, and appears happy. A legend appears on the screen: 'Have you noticed that there's only room for those who make room for themselves?'

The fact is that from the beginning of the film there is so much 'room' around these characters that one never gets the sense of a living bond of relationship. In place of dramatic dialogue, there is a series of monologues: the husband speaks of Finnish language and culture, of his techniques for intimidating people at the office, and of the evil of women; the son describes a childish utopia, and reports on school activities; the friend assesses her inadequacy as a teacher; the father offers a judgement on his life, and a lecture on acting; and an old woman speaks of the unprecedented and unrecorded experience of women today.

The wife (Edith Clever) says hardly anything, confining herself to reading passages from Flaubert and otherwise drifting around in a state of beatific melancholy. Bruno Ganz plays Bruno, the husband, looking very confused, as well he might. Presumably the identity of name is an alienation device, like the unnecessary announcement of the passing months and the characters' adoption now of German, now French. (Handke often suggests Kafka filtered through Brecht.) For their obsessive evocations of houses, streets and railways the director and his camerman, Robby Muller, have drawn on the paintings of Andrew Wyeth, creating beautiful panoramas in brown, white and grey that seemed quite at odds with the emotional tone.

'It's hard to admire a 'freedom' based on a husband's financial support, and we learn next to nothing of the real difficulties facing a woman in a society geared to the needs of men or couples, because the problem here is existential rather than social or psychological.