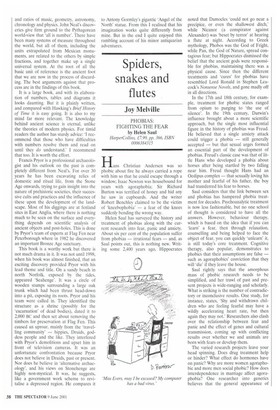 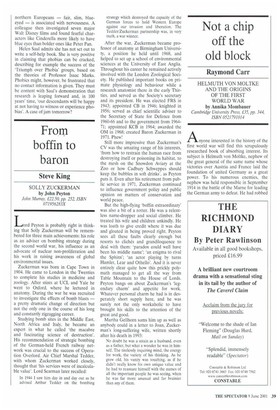 PHOBIAS: FIGHTING THE FEAR by Helen Saul HatperCollins, £7.99, pp. 366, ISBN 0006384315 Hans Christian Andersen was so phobic about fire he always carried a rope with him so that he could escape through a window; Isaac Newton was housebound for years with agoraphobia; Sir Richard Burton was terrified of honey and hid any he saw in cupboards. And the writer Robert Benchley claimed to be the victim of ckneebophobia' — a fear of the knees suddenly bending the wrong way.

Helen Saul has surveyed the history and treatment of phobias along with the current research into fear, panic and anxiety. About six per cent of the population suffer from phobias — irrational fears — and, as Saul points out, this is nothing new. Writing some 2,400 years ago, Hippocrates

noted that Damocles 'could not go near a precipice, or even the shallowest ditch,' while Nicanor (a conspirator against Alexander) was 'beset by terror' at hearing a flute at night. According to Greek mythology, Phobos was the God of Fright. while Pan, the God of Nature, spread contagious fear; but Hippocrates dismissed the belief that the ancient gods were responsible for phobias, maintaining there was a physical cause. Since then the different treatments and 'cures' for phobias have resembled Lord Ronald in Stephen Leacock's Nonsense Novels, and gone madly off in all directions.

In the 17th and 18th century, for example, treatment for phobic states ranged from opium to purging to 'the use of silence'. In the 19th century, Darwin's influence brought about a more scientific approach, but the single most influential figure in the history of phobias was Freud. He believed that a single anxiety attack could trigger a phobia — still generally accepted — but that sexual urges formed an essential part of the development of phobias. Freud's classic case was that of little Hans who developed a phobia about horses after being startled by two falling near him. Freud thought Hans had an Oedipus complex — that sexually loving his mother and fearful of his father, the boy had transferred his fear to horses.

Saul considers that the link between sex and phobias has hampered phobia treatment for decades. Psychoanalytic treatment is now less fashionable, but no one school of thought is considered to have all the answers. However, behaviour therapy, which is based on the idea that if you can 'learn' a fear, then through relaxation, counselling and being helped to face the object of fear, you can quickly 'unlearn' it, is still today's core treatment. Cognitive therapy, also popular, demonstrates to phobics that their assumptions are false — such as agoraphobics' conviction that they will 'die' if they leave the house.

Saul rightly says that the amorphous mass of phobic research needs to be simplified, and her trawl of past and present projects is wide-ranging and scholarly. What is striking is the number of contradictory or inconclusive results. One study, for instance, states, 'Shy and withdrawn children who are feeling fearful may have a wildly accelerating heart rate, but then again they may not.' Researchers also clash over the relationship between fear and panic and the effect of genes and cultural transmission, coming up with conflicting results over whether we and animals are born with fears or develop them.

The varied research projects leave your head spinning. Does drug treatment help or hinder? What effect do hormones have on panic? Why are more women agoraphobic and more men social phobic? How does interdependence in marriage affect agoraphobia? One researcher into genetics believes that the general appearance of northern Europeans — fair, slim, blueeyed — is associated with nervousness. A colleague then investigated seven major Walt Disney films and found fearful characters like Cinderella more likely to have blue eyes than bolder ones like Peter Pan.

Helen Saul admits she has not set out to write a self-help book. She is very positive in claiming that phobias can be cracked, describing for example the success of the 'Triumph over Phobia' groups, based on the theories of Professor Isaac Marks. Phobics might, however, be frustrated that no contact information is given. They must be content with Saul's demonstration that research is leaping forward and, in 100 years' time, 'our descendants will be happy at not having to witness or experience phobias'. A case of jam tomorrow?