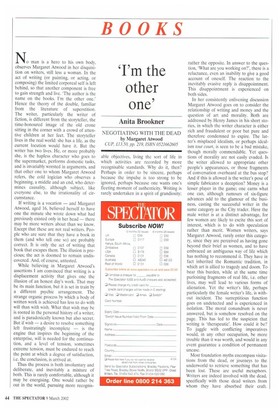 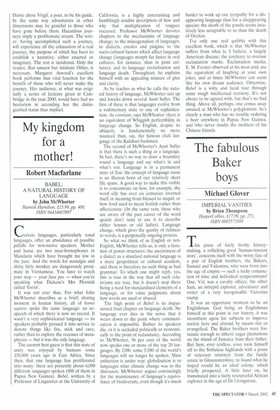 NEGOTIATING WITH THE DEAD by Margaret Atwood

CUP, £13.50, pp. 219, ISBN 0521662605 No man is a hero to his own body, observes Margaret Atwood in her disquisition on writers, still less a woman. In the act of writing (or painting, or acting, or composing) the limited corporeal self is left behind, so that another component is free to gain strength and live. 'The author is the name on the books. I'm the other one.' Hence the theory of the double, familiar from the literature of superstition. The writer, particularly the writer of fiction, is different from the storyteller, the time-honoured image of the old crone sitting in the corner with a crowd of attentive children at her feet. The storyteller lives in the real world: she has a life, as the current locution would have it. But the writer has two lives. He, or more probably she, is the hapless character who goes to the supermarket, performs domestic tasks, and is invariably worsted in arguments, and that other one to whom Margaret Atwood refers, the cold logician who observes a beginning, a middle and an end, who determines causality, although subject, like everyone else, to the irrationality of circumstance.

If writing is a vocation — and Margaret Atwood, aged 16, believed herself to have one the minute she wrote down what had previously existed only in her head — there may be more writers about than we know. Except that these are not real writers. People who are sure that they have a book in them (and who tell one so) are probably correct. It is only the act of writing that book that escapes them. The illusion is precious; the act is doomed to remain undiscovered. And, of course, untested.

While believing in Margaret Atwood's assertions I am convinced that writing is a displacement activity that gives one the illusion of an honest day's work. That may be its main function, but it is set in train by a different psychic arrangement. The strange organic process by which a body of written work is achieved has less to do with will than with wish. What that wish may be is rooted in the personal history of a writer, and is paradoxically known but also secret. But if wish — a desire to resolve something left frustratingly incomplete — is the engine that inspires the beginning of the enterprise, will is needed for the continuation, and a level of tension, sometimes extreme tension, must be endured to reach the point at which a degree of satisfaction, i.e. the conclusion, is arrived at.

Thus the process is both involuntary and deliberate, and inevitably a mixture of both. This is rarely comfortable, although it may be energising. One would rather be out in the world, pursuing more recognis able objectives, living the sort of life in which activities are recorded by more recognisable standards. Why do it, then? Perhaps in order to be sincere, perhaps because the impulse is too strong to be ignored, perhaps because one wants one's fleeting moment of authenticity. Writing is rarely undertaken in a spirit of grandiosity; rather the opposite. In answer to the question, 'What are you working on?', there is a reluctance, even an inability to give a good account of oneself. The reaction to the inevitably evasive reply is disappointment. This disappointment is experienced on both sides.

In her consistently enlivening discussion Margaret Atwood goes on to consider the relationship of writing and money and the question of art and morality. Both are addressed by Henry James in his short stories, in which the writer character is either rich and fraudulent or poor but pure and therefore condemned to expire. The latter's misplaced idealism, or perhaps idealism tout court, is seen to be a bad mistake, though morally commendable. Yet questions of morality are not easily evaded. Is the writer allowed to appropriate other people's appearances, or those fragments of conversation overheard at the bus stop? And if this is allowed is the writer's pose of simple fabricator a deception? Money is a lesser player in the game; one earns what one can, although rumours of six-figure advances add to the glamour of the business, casting the successful writer in the same category as the City trader. Here the male writer is at a distinct advantage, for few women are likely to excite this sort of interest, which is to do with speculation rather than merit. Women writers, says Margaret Atwood, rarely enter this category, since they are perceived as having gone beyond their brief as women, and to have embraced an ambiguous way of life which has nothing to recommend it. They have in fact inherited the Romantic tradition, in which art is allied to tragedy and doom. To bear this burden, while at the same time purloining fragments of real life, i.e. other lives, may well lead to various forms of alienation. Yet the writer's life, perhaps particularly the female writer's life, is without incident. The surreptitious function goes on undetected and is experienced in isolation. The moral conundrum is never answered, but is somehow resolved on the page. This has led to the suspicion that writing is 'therapeutic'. How could it be? To juggle with conflicting imperatives would, in any other occupation, be more trouble than it was worth, and would in any event guarantee a condition of permanent unease.

Most foundation myths encompass visitations from the dead, or journeys to the underworld to retrieve something that has been lost. These are useful metaphors. Writers are indeed involved with the dead, specifically with those dead writers from whom they have absorbed their craft. Dante chose Virgil, a poet, to be his guide. In the same way adventurers in other dimensions may be grateful to those who have gone before them. Hazardous journeys imply a problematic return. The writer, having accomplished such a journey, will experience all the exhaustion of a real journey, the purpose of which has been to establish a narrative, either enacted or imaginary. The rest is incidental. Only the reader, that unseen but intimate Other, is necessary. Margaret Atwood's excellent book performs that vital function for the benefit of those who will never make the journey. Her audience, at what was originally a series of lectures given at Cambridge in the year 2000, would have had no hesitation in according her the distinguished status thus implied.