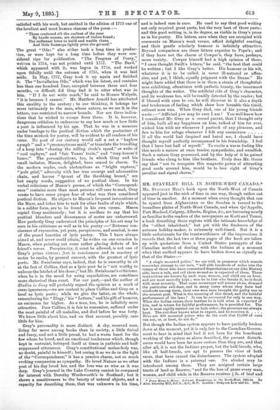 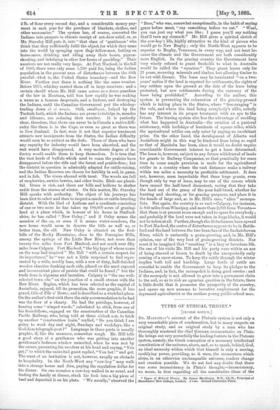 upon the North-West of Canada appeared just in the nick of time in one way, though rather out

of time in another. At a moment when every thought that can be spared from Afghanistan or the Soudan is turned to the boundless plains of North-West Canada, and when Qu'Appelle, Fort Macleod, Calgary, Alberta, Regina, Scc., are becoming nearly as familiar to the readers of the newspapers as Korti and Tamai, a book describing those regions with the intimate knowledge of the "oldest inhabitant," but yet with the freshness of the autumn holiday-maker, is extremely well-timed. But it is a little unfortunate for the trustworthiness of the impressions it records that the last two or three pages of the book are taken up with quotations from a United States panegyric of the Canadian method of dealing with the Indians at a moment when that method appears to have broken down as signally as

that of the States :—

"A single mounted police," we are told, in grammar which sounds somewhat strange to our ears, "will ride hundreds of miles into the camps of those who have committed depredations on our (the States) side, have a talk, and tell them so-and-so is expected of them. Theae instructions are known by each man, woman, and child ere an hour, and are most sacredly kept ; woo be to him who breaks it, be is dealt with most severely. That same messenger will return alcne, demand the particular evil-doer, and in many eases where they have had misdeeds among them, their own men have brought the guilty one to the nearest post. What is the meaning of this dread, and the faithful performance of the laws ? It can be accounted for only in one way. When the Indian enters their borders he is told what is expected of him, and in return for faithful performance, be is provided for. The law is most rigidly carried out on both sides; the promises are always

kept. The evil-doer knows what to expect, and he receives it Here are 400 mounted police who do the work that 15,000 of ours can not or, at least, do not do."

Bat though the Indian system appears to have partially broken down at the moment, yet it is only fair to the Canadian Government to bear in mind that had it not been for the beneficent working of the system as above described, the present disturbances would have been far more serious than they are, and that after all, it is not the Indians proper, but the half-breeds, who, like all half-breeds, are apt to possess the vices of both races, that have caused the disturbances. The system adopted with the Indians is a paternal one. No alcohol may be introduced among them. They are assigned certain large tracts of land as Reserve, "and for the loss of game every man, woman, and child while in the Reserve receives lb. of beef and