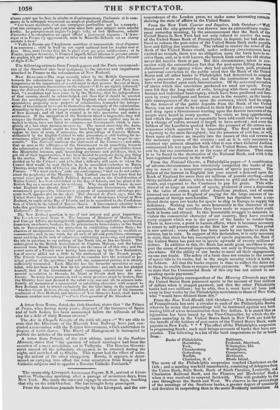 A letter from Rome, dated the 19th October, states that"

the Prince of Peace, who, during many years, disposed of the treasures of Spain and of both Indies, has been summoned before the tribunals of that city for a debt of sixty Roman crowns."

The Aix in Chapelle Gazette of time 24th ult. says—" We are able to State that the Directors of the Rhenish Iron Railway have just concluded a convention with the Belgian Government, which undertakes to dispose of 4,000 shares. The Board of Management is instructed to publish the articles of the convention."

A letter from Poland, of the 21st ultimo, quoted in the Suabian Mercury, states that " the question of mixed marriages had been the occasion of a most scandalous act in Volhynia. The Russian Government caused all the refractory clergymen to be arrested during the night, and marched off to Siberia. This rigour had the effect of calming the ardour of the other clergymen. Russia, it appears, is determined on carrying into effect the total separation from Rome of her Catholic subjects and to appoint a Russian Catholic Patriarch."