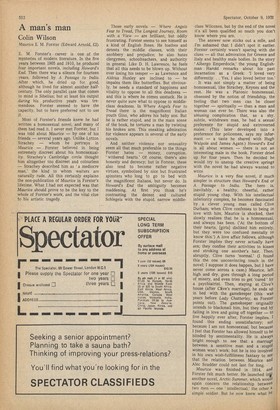 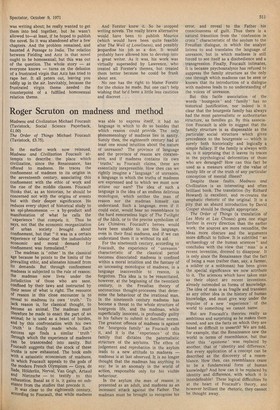 E. M. Forster's career is one of the mysteries of modern literature. In the five years between 1905 and 1910, he produced four important novels, including Howard's End. Then there was a silence for fourteen years, followed by A Passage to India. After which, he dried up for good, although he lived for almost another halfcentury. The only parallel case that comes to mind is Sibelius; but at least his output during his productive years was tremendous. Forster seemed to have the capacity, but to have preferred not to use it.

Most of Forster's friends knew he had written a homosexual novel, and many of them had read it. I never met Forster, but I was told about Maurice — by one of his friends — several years ago. Unlike Lytton Strachey — whom he portrays in Maurice — Forster believed in being extremely discreet about his homosexuality. Strachey's Cambridge circle thought him altogether too discreet and colourless — Strachey described him as ' a mediocre man,' the kind to whom waiters are naturally rude. All this certainly explains the non-publication of Maurice in Forster's lifetime. What I had not expected was that Maurice should prove to be the key to the whole of Forster's work, and the vital clue to his artistic tragedy.

Those early novels — Where Angels Fear to Tread, The Longest Journey, Room with a View — are brilliant, but oddly frustrating. Forster seems to see himself as a kind of English Ibsen. He loathes and detests the middle classes, with their snobbery and prejudice; he also hates clergymen, schoolteachers, and authority in general, Like D. H. Lawrence, he feels that all this needs to be blown up. Without ever losing his temper — as Lawrence and Aldous Huxley are inclined to — he impales them like butterflies. But obviously, he needs a standard of happiness and vitality to oppose to all this deadness — and this is where he conies unstuck. He is never quite sure what to oppose to middleclass deadness. In Where Angels Fear to Tread there is the magnificent Italian youth Gino, who adores his baby son. But he is rather stupid, and in the main scene of the book, he tortures a man by twisting his broken arm. This sneaking admiration for violence appears in several of the early novels.

And neither violence nor sensuality seem all that much preferable to the things Forster hates — money, corruption, withered hearts.' Of course, there's also honesty and decency; but in Forster, these also tend to become rather negative virtues, symbolised by nice but frustrated spinsters who long to go to bed with the magnificent Italians, but never do. In Howard's End the ambiguity becomes maddening. At first you think he's contrasting the decent and cultured Schlegels with the stupid, narrow middle class Wilcoxes, but by the end of the novel it's all been qualified so much you don't know where you are.

The answer now sticks out a mile, and I'm ashamed that I didn't spot it earlier. Forster certainly wasn't sparing with the clues — all that admiration for Greece and Italy and healthy male bodies. In the story Albergo Emperdocle,' the young Englishman Harold remarks about his past incarnation as a Greek: 'I loved very differently. . . Yes, I also loved better too.'

It was not simply a matter of being homosexual, like Strachey, Keynes and the rest. He was a Platonic homosexual, obsessed by the notion of friendship, the feeling that two men can be closer together — spiritually — than a man and woman can ever be. There was also the amusing complication that, as a shy, subtle, withdrawn man, he had a sexual preference for stupid and extroverted males. (This later developed into a preference for policemen, says my informant — a taste he shared with Hugh Walpole and James Agate.) Howard's End is all about women — there is not an interesting male in the book. Forster dried up for four years. Then he decided he would try to unstop the creative springs with the novel he had always wanted to write Maurice is a very fine novel, if much simpler in structure than Howard's End or A Passage to India. The hero is, inevitably, a healthy, cheerful, rather stupid young chap. With his intellectual inferiority complex, he becomes fascinated by a clever young man called Clive Durham; when Clive confesses to being in love with him, Maurice is shocked, then slowly realises that he is a homosexual, and always has been. ('At the bottom of their hearts, [girls] disliked hith entirely, but they were too confused mentally to know this.') A love affair follows, although Forster implies they never actually have sex; they confine their activities to kisses and stroking one another's hair. Then, abruptly, Clive turns 'normal.' (I found this the one unconvincing touch in the novel; I suppose it does happen, but I have never come across a case.) Maurice, left high and dry, goes through a long period of misery, and even tries to get 'cured ' by a psychiatrist. Then, staying at Clive's house (after Chive's marriage), he ends up in bed with the gamekeeper (this was years before Lady Chatterley, as Forster points out). The gamekeeper originally intends to blackmail him, but they end bY falling in love and going off together — to live happily ever after, Forster implies. found this ending unsatisfactory; not because I am not homosexual, but because I feel that Forster has allowed himself to he blinded by sentimentality. He is always bright enough to see that a marriage between a sensitive man and a stupid woman won't work; but he is too involved in his own wish-fulfillment fantasy to see that the relation between Maurice and Alec Scudder could not last for long. Maurice was finished in 1914, and Forster felt much better. He launched in another novel, Arctic Summer, which woad again concern the relationship between two men — one 'intellectual,' the other a simple soldier. But he now knew what he

was writing about; he really wanted to get them into bed together, but he wasn't allowed to—at least, if he hoped to publish the novel. So it was abandoned after a few chapters. And the problem remained, and haunted A Passage to India. The relation between Fielding and Aziz in that novel ought to be homosexual; but this was out of the question. The whole story — as everyone knows — turns on the delusion of a frustrated virgin that Aziz has tried to rape her. It all peters out, leaving you oddly up in the air. Inevitably, because the frustrated virgin theme needed the counterpoint of a fulfilled homosexual relation theme. And Forster knew it. So he stopped writing novels. The really brave alternative would have been to publish Maurice (which would have been quite feasible after The Well of Loneliness), and possibly jeopardise his job as a don. It would probably have allowed him to develop into a great writer. As it was, his work was virtually superseded by Lawrence, who treated all Forster's themes, but treated them better because he could be frank about sex.

No one has the right to blame Forsttr for the choice he made. But one can't help wishing that he'd been a little less cautious and discreet . . .