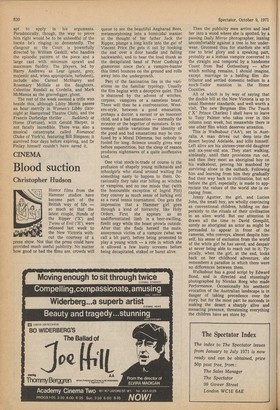 • Horror films from the Hammer studios have • become part of the British way of life — so much so that the latest couple, Hands of the Ripper ('X') and Twins of Evil ('X'), were released last week to the New Victoria without the courtesy of a press show. Not that the press could have provided much useful publicity. No matter how good or bad the films are, crowds will queue to see the beautiful Angharad Rees, metamorphosing into a homicidal maniac at the thought of her father Jack the Ripper, plunge a long knife into the gut of Vincent Price (he gets it out by hooking the end over a door handle and falling backwards), and to hear the loud thunk as the decapitated head of Peter Cushing's glamorous niece (he's a vampire-hunter this time) bounces on the ground and rolls away into the undergrowth. Part of the fascination lies in the variations on the familiar typology. Usually the film begins with a deceptive quiet. This is shattered by the advent of witches, corpses, vampires or a nameless beast. There will then be a confrontation, Western-style, between a good emanation, perhaps a doctor, a savant or an innocent s child, and a bad emanation — normally the monster or the begetter of monsters. In extremely subtle variations the identity of the good and bad emanations may be confused by a Moral Dilemma, but nobody is fooled for long. Science usually gives way before superstition, but the sleep of reason produces nightmares of a quite inoffensive kind.

One vital stock-in-trade of course is the profusion of shapely young milkmaids and schoolgirls who stand around waiting for something nasty to happen to them. Occasionally they take star billing as witches or vampires, and no one minds that (with the honourable exception of Ingrid Pitt) they convey as much sense of lurking evil as a rural tennis tournament. One gets the • impression that a Hammer girl goes through a kind of hierarchy, like Holy Orders. First she appears as an undifferentiated limb in a beer-swilling, firelit orgy while the beast prowls outside. After that she finds herself the mute, anonymous victim of a vampire (what we call a bit part), before being promoted to play a young witch — a role in which she is allowed a few busty screams before being decapitated, staked or burnt alive. Then the publicity men arrive and lead her into a wood where she is spotted, by a passing Daily Mirror photographer, leaning uncomfortably against a tree in her underwear. Groomed thus for stardom she will rise to brief glory and a speaking part, probably as a lesbian vampire converted to the straight and temporal by a handsome Count from Bad Gothenburg — after which nothing remains, I should imagine, except marriage to a balding film distributor and settled domestic tedium in a mock-Tudor mansion in the Home Counties. All of which is by way of saying that the double bill at the New Victoria is up to usual Hammer standards, and well worth a visit. The new Bergman film The Touch (' X ' Prince Charles) I shall have to leave to Tony Palmer who takes over in this column next week, but meanwhile there is one other film which deserves attention. This is Walkabout ('AA'), set in Australia. A man drives out deep into the desert beyond Adelaide, and kills himself. Left alive are his sixteen-year-old daughter and six-year-old son. They start walking, aimlessly, until their provisions run out, and then they meet an aboriginal boy on his walkabout, proving his manhood by surviving alone in the outback. Following him and learning from him they gradually find their way back to civilisation, but not before the girl, especially, is made to appreciate the values of the world she is escaping from. Jenny Agutter, the girl, and Lucien John, the small boy, are wholly convincing as conventional children, holding on desperately to the rituals of their civilisation in an alien world. But our attention is drawn all the time to David Gompilil, surely as aboriginal an actor as might be persuaded to appear in front of the cameras, who conveys, almost despite himself, his sense of exclusion from the world of the white girl he has saved, and despair at never being able to reach out to it. Typically, when the girl, at the end, looks back on her childhood adventure, she remembers a paradise in which there were no differences between them. Walkabout has a good script by Edward Bond, and is directed and stunningly photographed by Nicolas Roeg who made Performance. Occasionally his aesthetic evocation of the Australian landscape is in danger of taking precedence over the story, but for the most part he succeeds in making the desert a sharply alive and menacing presence, threatening everything the children have set store by.