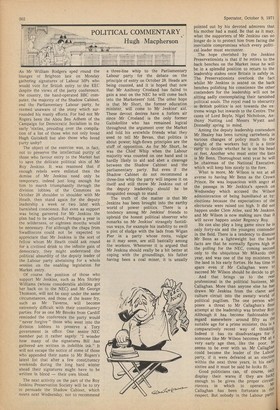 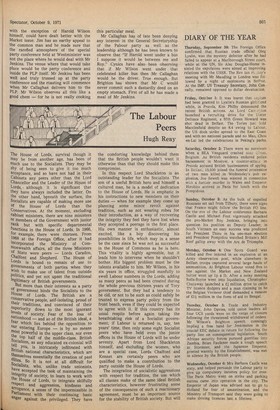 As Mr Wiliam Rodgers sped round the lounges of Brighton late on Monday gathering signatures of Labour MPs who would vote for British entry to' the EEC despite the views of the party conference, the country, the hand-operated BBC computer, the majority of the Shadow Cabinet, and the Parliamentary Labour party, he seemed unaware of the irony which surrounded his manly efforts. For had not Mr Rogers been the Abou Ben Adhem of the Campaign for Democratic Socialism in the early 'sixties, presiding over the compilation of a list of those who not only loved Hugh Gaitskell but also those who loved party unity?

The object of the exercise was, in fact, not to preserve the intellectual purity of those who favour entry to the Market but to save the delicate political skin of Mr Roy Jenkins. It was reasoned that if enough rebels were enlisted then the demise of Mr Jenkins need only be temporary, indeed just long enough for him to march triumphantly through the division lobbies of the Commons on October 28 shoulder to shoulder with Mr Heath, then stand again for the deputy leadership a week or two later with burnished conscience. But even as support was being garnered for Mr Jenkins the plan had to be adjusted. Perhaps a year in the wilderness, or eighteen months would be necessary. For although the chaps from Swadlincote could not be expected to appreciate that Mr Jenkins is the sort of fellow whom Mr Heath could ask round for a civilised drink to the infinite gain of democracy, they might understand the political absurdity of the deputy leader of the Labour party abstaining for a whole session on the enabling legislation for Market entry.

Of course the position of those who support Mr Jenkins, such as Mrs Shirley Williams (whose considerable abilities got her back on to the NEC) and Mr George Thomson, will not be easy under the same circumstances, and those of the lesser fry, such as Mr Taverne, will become extremely difficult with their constituency parties. For as one Mr Brooks from Cardiff reminded the conference the party would " never forgive" those who went into the division lobbies to preserve a Tory government in office. One senior NEC member put it rather sagely: "I wonder how many of the signatures Bill has gathered are written in indelible ink." It will not escape the notice of some of those who appended their name to Mr Rogers's latest list that after a few constituency weekends during the long hard winter ahead their signatures might have to be written in blood — their own blood.

The next activity on the part of the Roy Jenkins Preservation Society will be to try to persuade the Shadow Cabinet, which meets next Wednesday, not to recommend a three-line whip to the Parliamentary Labour party for the debate on the principle of entry on October 28. Heads are being counted, and it is hoped that now that Mr Anthony Crosland has failed to gain a seat on the NEC he will come back into the Marketeers' fold. The other hope is that Mr Short, the former education minister, will come to Mr Jenkins' aid. These devout desires have a forlorn air since Mr Crosland is the only former Gaitskellite who has remained logical throughout the argument over the Market and told his erstwhile friends what they used to tell Mr Bevan, that politics is about power; high-flown principles are the stuff of opposition. As for Mr Short, he was the Chief Whip when the Labour majority was counted on one hand and is hardly likely to aid and abet a cleavage between the Shadow Cabinet and the parliamentary party. But even if the Shadow Cabinet do not recommend a three-line whip the party will impose it on itself and still throw Mr Jenkins out of the deputy leadership should he be misguided enough to stand.

The truth of the matter is that Mr Jenkins has been brought into the earthy world of power politics. There is a tendency among Mr Jenkins' friends to upbraid the honest political observer who remarks on Mr Jenkins' strangely fastidious ways, for example his inability to swill a pint of sludge with the lads from Wigan Pier in a party whose roots, vulgar as it may seem, are still basically among the workers. Whenever it is argued that Mr Jenkins should really be a bit better at coping with the groundlings, his father having been a coal miner, it •is usually pointed out by his devoted admirers that his mother had a maid. Be that as it may, what the supporters of Mr Jenkins can no longer do is to protect him from facing the inevitable compromises which every political leader must encounter.

The hope cherished by the Jenkins Preservationists is that if he retires to the back benches on the Market issue he will be in a splendid position to return to the leadership stakes once Britain is safely in. The Preservationists overlook the fact whilst Mr Jenkins is seated on the back benches polishing his conscience the other contenders for the leadership will not be sitting sadly contemplating their tarnished political souls. The royal road to obscurity in British politics is not towards the extreme wings but inwards to the Centre. The cases of Lord Boyle, Nigel Nicholson, Anthony Nutting and Messrs Wyatt and Donnelly spring to mind.

Among the deputy leadership contenders Mr Healey has been turning cartwheels in various changes of policy much to the delight of the workers but it is a little early to decide whether he is on his head or feet. Another who must enter the lists is Mr Benn. Thoroughout next year he will be chairman of the National Executive, which will keep him nicely to the fore.

What is more, Mr Wilson is not at all averse to having Mr Benn as the Crown Prince. He was loquacious with anger at the passage in Mr Jenkins's speech on Wednesday which accused the Wilson administration of being humiliated at byelections because the expectations of the electorate were raised too high. It did not happen under Clem Atlee, said Mr Jenkins, and Mr Wilson is now making sure that it will never happen under Regency Roy.

He can also play a long game since he is only forty-six and the youngest contender in the field. There is a tendency to dismiss Mr Benn as a lightweight but the hard facts are that he normally figures high in the polling for the NEC, coming second only to the ubiquitous Mr Mikardo this year, and was one of the top ministers in the land in his early forties. He has time to spare even if Mr Callaghan were to succeed Mr Wilson should he decide to go. And that brings us to the real professional in the political business, Mr Callaghan. More than anyone else he ha$ drawn Mr Jenkins from the claret and culture circuit into the sweaty world of political pugilism. The one person .vvh° poses a threat to Mr Callaghan's final attempt at the leadership was brother ROY. Although it has become fashionable t° regard somewhere around fifty as the suitable age for a prime minister, this is 8 comparatively recent way of thinking; Indeed it has its disadvantages for u someone like Mr Wilson becomes PM at a very early age then, like the poor, he seems to be ever with us. Mr Callagilarl could become the leader of the Labour party, if it were defeated at an election within the next three years, in his earlY sixties and it must be said he looks fit. Good politicians can, of course, onlY display their wares if they are lucl

With the exception of Harold Wilson himself, could have dealt better with the Market issue. Jim has an earthy appeal to the common man and he made sure that the rarefied atmosphere of the special party conference held at Westminister was not the place where he would deal with Mr Jenkins. The venue where that would take Place would be the party conference and inside the PLP itself. Mr Jenkins has been well and truly trussed up at the party conference and the roasting will commence When Mr Callaghan delivers him to the PLP. Mr Wilson observes all this like a good chem — for he is not really cooking this particular meal.

Mr Callaghan has of late been denying any interest in the General Secretaryship of the Pabour party as well as the leadership although he has been known to observe that "If Harold went under a bus I suppose it would be between me and Roy." Cynics have also been observing that if Mr Wilson went under that celebrated killer bus then Mr Callaghan would be the driver. True enough. But Brighton has shown that Mr C would never commit such a dastardly deed on an empty stomach. First of all he has made a meal of Mr Jenkins.