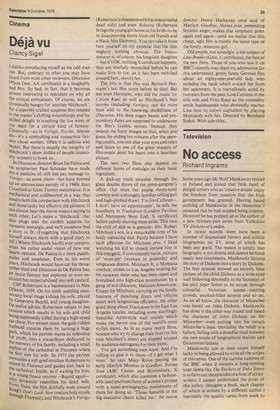 Clancy Sigal I dislike introducing myself as the odd man out. But, contrary to what you may have heard from most other reviewers, Obsession (Plaza One, AA certificate) is a laughably bad film. So bad, in fact, that it becomes almost interesting to speculate on why all the critical enthusiasm. Of course, we are chronically hungry for 'another Hitchcock', for a superbly crafted suspense film steeped in the master's chilling misanthropy and his Skilled delight in touching the live wires of our need for a certain kind of fantasy. Classically—as in Vertigo, Psycho, Marnie etc—it's a controlling and voyeuristic fantasy about women. Often it is sadistic and brutal. But there is usually the integrity of Hitchcock's sheer dislike of people (especially women) to hook us.

In Obsession, director Brian De Palma and his scriptwriter Paul Schrader have made not a pastiche of, still less pay homage to, Vertigo—as some claim—but have brewed Up an unconscious parody of a 1940s Joan Crawford or Gene Tierney melodrama. It is mechanical and coldhearted in a way that insults both the comparison with Hitchcock and those tacky but effective old pictures. (I can almost hear the movie makers saying to each other, Let's make a `Hitchcock' that also plugs into the current appetite for romantic nostalgia, and we'll somehow find a, story to fit. (Forgetting that Hitchcock himself always starts with a good story to tell.) Where Hitchcock hardly ever compromises his rather awful vision of how our hearts operate, De Palma is a born punchPuller and sweetener. Even in his worst Years. Hitchcock would have cut his throat rather than end Obsession as De Palma has, an incest fantasy not explored or even exPloited but respectabilised into soft custard.

Cliff Robertson is a businessman in New Orleans, 1959. On his tenth wedding anniversary local thugs kidnap his wife, played by Genevieve Bujold, and young daughter. On Police advice, Robertson refuses to pay ransom which results in his wife and child being supposedly killed during a high-speed car chase. For sixteen years, the guilt-ridden husband mourns them by turning a huge Park, which his partner wants to redevelop for profit, into a mausoleum dedicated to the memory of his family, including a small replica of the cathedral in Florence where he first met his wife. In 1975 the partner Persuades a still grief-stricken Robertson to return to Florence and guides him back to ithe cathedral. Inside, as if waiting for him, s a young fresco restorer—Bujold again

0 uncannily resembles his dead wife. rsrom there, the film dutifully nods toward ti" r eg s Don't Look Now (melancholy strolls rough Florence), and Hitchcock's Vertigo (Robertson's obsession with his reincarnated dead wife) and even Rebecca (Robertson brings the young girl home as his bride-to-be to disapproving stares from old friends and a black Mrs Danvers). You can take it from here yourself on my promise that the film neglects nothing obvious. The frescorestorer is, of course, his long-lost daughter —but it's OK, nothing X certificate happens, they are tearfully reconciled before he can make love to (or, as it has been switched around here, shoot) her.

The pity is that this was Bernard Hermann's last film score before he died. But not even Hermann, who did the music for Citizen Kane as well as Hitchcock's best movies (including Vertigo), can do more than add to the knowing shoddiness of Obsession. His deep organ basses and premonitory flutes are supposed to underscore the film's Gothic terrors. Instead, they swamp the fuzzy images so that, when you guess the ending ten minutes after the opening credits, you can shut your eyes and relax and listen to one of the great masters of film-music pour his heart into a heartless picture.

The next two films also depend on different forms of nostalgia as their basic ingredient.

A pick-up truck smashes through the glass double doors of the pimp-gangster's office. Out steps the young sleepy-eyed cowboy with a strangely familiar rolling gait and high-pitched drawl. I'm Jim Calhoun— I don't have an appointment', he tells the hoodlums in Trackdown (London Pavilion and Metropole West End, X certificate) before calmly shoving them aside. This time the chill of OM vu is genuine: Jim, Robert Mitchum's son, is a remarkable copy of his lazily menacing dad. Partly because I have such affection for Mitchum pere, 1 liked watching his kid so closely imitate him in this energetic, if conveniently racist, mixture of 'wom-jep' (woman in jeopardy) and vengeance drama. Mitchum Jr, a Montana cowboy, comes to Los Angeles looking for his runaway sister who has been raped and brutalised into high-class prostitution by a gang of evil chicanos, Mexican-Americans. Except for Mitchum, carrying on the family business of punching doors and villains apart with languorous efficiency, the other good thing about Trackdown is the East Los Angeles locales, including some startlingly beautiful Aztec-style wall murals which make the barrio one of the world's most stylish slums. As in so many recent films, women who try to change their lives (in this case Mitchum's sister) are slapped around by audience-surrogates for their pains. I've got something men want. And I'm willing to give it to them—if I get what I want.' So says Misty Rowe playing the early Marilyn Monroe in Goodbye, Norma Jean (ABC Casino and Bloomsbury: X certificate), which also combines a fashionable (and spurious) form of women's protest with a quasi-pornographic punishment of them for doing so. 'Those bastards in the big executive chairs killed her,' the movie director Henry Hathaway once said of Marilyn. Goodbye, Norma Jean, pretending feminist anger, makes that simplistic point

again and again until we realise that this cheap, ugly film is merely the latest rape of the lovely, innocent girl.

Old people, not nostalgia, is the subject of Lina Braake (Gate, U certificate), the best of the new films. Those of you who saw it on BBC2 recently may share my admiration for this understated, gently funny German film about an eighty-one-year-old lady who swindles the bank which evicted her from her apartment. It is marvellously acted by two stars from the past, Lina Carstens in the title role and Fritz Rasp as the ostensibly senile businessman who shrewedly teaches Lina how to outwit capitalism by playing Monopoly with her. Directed by Bernhard Sinkel. With sub-titles.