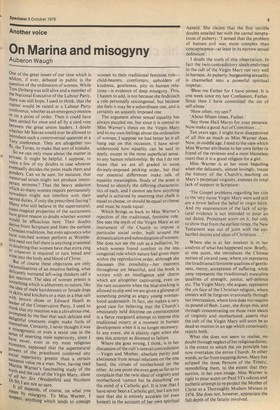 On Marina and misogyny

One of the great issues of our time which is seldom, if ever, debated in public is the question of the ordination of women. While Tom Driberg was still alive and a member of the National Executive of the Labour Party, there was still hope. I used to think, that the matter would be raised at a Labour Party conference, whether as an emergency motion or on a point of order. Then it could have been settled for once and all by a card vote between the great union leaders. I doubt Whether Mr Stevas would ever be allowed to Introduce such a controversial question at a 1-2rY conference. They are altogether too fly. the Tories, to make that sort of mistake.

So we can only muse about the matter in Private. It might be helpful, I suppose, to voice a few of my doubts in case whoever eventually decides the point reads them and Ponders. Can we be sure, for instance, that menstrual strain might not produce internDerate sermons? That the heavy sedation Which so many women require permanently nowadays might not interfere with their sacred duties, if only the prescribed fasting ? "any who still believe in the supernatural, ciLuasi-magical properties of the sacraments nave grave reason to doubt whether women would be efficacious here. Their doubts derive from Scripture and frwn the earliest Christian traditions, but even agnostics who have watched women perform at Wimbled. on need not feel there is anything irrational In doubting that women have that extra zing or whatever is required to turn bread and wine into the body and blood of Christ. But of course these objections are only rationalisations of an intuitive feeling, what delicately nurtured left-wing thinkers call a i gut reaction. The idea of women priests s sftething which is abhorrent to nature, like !he Idea of male hairdressers or female dogs 2.skirts and knickers or a man in a blue suit .itb brown shoes or Edward Heath as I!a.der of the Conservative Party. I used to think that my reaction was a chivalrous one, dPrcimPted by the fear that such delicate and ,,elIghtfol creatures might make fools of tanemselves. Certainly, I never thought it was s misogynistic or even a sexist one in the Lense of asserting male superiority, since I .lave never, even in my most religious In°ments, supposed that the supernatural 1:::w.ers of the priesthood conferred any n c.ial superiority greater than a certain uisance value on a man. Now, having read Mate Warner's fascinating study of the odyth and the cult of the Virgin Mary, Alone her Sex (Weidenfeld and Nicolson I am not so sure. Lt all depends, of course, on what you s„ean bY misogyny. To Miss Warner, I "sPeot, anything which tends to consign

women to their traditional feminine rolechild-bearers, comforters, upholders of kindness, gentleness, pity in human relations—is evidence of deep misogyny. This, I hasten to add, is not because she finds such a role personally uncongenial, but because she feels it may be a subordinate one, and is certainly an unjustly imposed one.

The argument about sexual equality has always puzzled me, but since it is central to Miss Warner's thesis on the Virgin Mary and to my own feelings about the ordination of women, I suppose we had better let it all hang out on this occasion. I have never understood how equality can be said to apply, except in the most superficial sense. to any human relationship. By this I do not mean that we are all graded in some divinely-imposed pecking order, but that our essential differences make talk of equality meaningless. Study of the sexes is bound to identify the differing characteristics of each, and I cannot see how anything useful is achieved by asserting that chalk is equal to cheese, or should be equal to cheese and must be made equal.

Which brings us back to Miss Warner's rejection of the traditional, feminine role. She sees the myth of the Virgin Mary as an instrument of the Church to impose a particular social order, built around the domestication and subordination of women. She does not see the cult as a palliative, by which women found comfort in the less congenial role which nature had given them within the reproductive order, although she discusses this possibility—her manners throughout are beautiful, and the book is written with an intelligence and charm which are altogether captivating, even on the rare occasions when the blue stocking is allowed to slip and we are given a glimpse of something posing as angry young womanhood underneath. In fact, she makes a very good case for believing that the Church's obstinately held doctrine on contraception is a fierce rearguard attempt to impose this traditional misery al a moment in human development when it is no longer necessary. In any event, she is plainly right when she sees this attempt as doomed to failure.

Where she goes wrong, I think, is in her discussion of the cult's central contradiction —Virgin and Mother, absolute purity and abstinence from sexual relations on the one hand, the virtues of motherhood on the other. At one point she even goes so far as to complain that the twin ideal of virginity and motherhood 'cannot but be disturbing on the mind of a Catholic girl. It is true that I have never been a Catholic girl, but I am not sure that she is entirely accurate (or even honest) in the account of her own spiritual Aeneid. She claims that the first terrible doubts assailed her with the carnal temptations of puberty: 'I sensed that the problem of human evil was more complex than concupiscence—at least in its narrow sexual definition'.

I doubt the truth of this observation. In fact the twin contradictory ideals enshrined in the cult of the Virgin Mary run very well in harness. At puberty, burgeoning sexuality is channelled into a powerful spiritual impetus: 'Bless me Father for I have sinned. It is one week since my last Confession, Father. Since then I have committed the sin of self-abuse.'

Ten years ago. I might have disapproved of all this as much as Miss Warner does. Now, in middle age. I tend to the view which Miss Warner attributes to her own father (a friend of the reviewer and a most blameless man) that it is a good religion for a girl.

Miss Warner is at her most beguiling when she delicately, almost lovingly, traces the history of the Church's. teaching on Mary's perpetual virginity, exposes its total lack of support in Scripture: 'The Gospel problems regarding her title to the very name Virgin Mary were and still are a straw before the belief in virgin birth. And my enumeration of the lack of scriptural evidence is not intended to pour an out dated, Protestant scorn on it, but only to show that from the earliest times, the New Testament was out of joint with the embattled desires and ideas of Christians ...'

Where she is at her weakest is in her analysis of what has happened now. Briefly, at one point, she introduces the Chinese notion of yin and yang, where yin represents the (traditional) feminine qualities of gentleness, mercy, acceptance of suffering, while yang represents the (traditional) masculine qualities of strength, justice, self-defence etc. The Virgin Mary, she argues, represents the yin face of the Christian religion, where sinners will be forgiven irrationally through her intercession, where love does not require its pound of flesh. Later, she drops this, and through concentrating on those twin ideals of virginity and motherhood, asserts that the cult of the Virgin Mary will soon be as dead as mutton in an age which consciously rejects both.

What she does not seem to realise, no doubt through neglect of her religious duties. is the extent to which the yin principle has now overtaken the entire Church. In other words, so far from stepping down. Mary has eclipsed the three Persons of the Trinity, remodelling them, to the extent that they survive, in her own image. Miss Warner is right to pour scorn on Paul VI's odious and pathetic attempt to re-project the Mother of Christ as a Thoroughly Modern Miriam in 1974. She does not, however, appreciate the full depth of the fatuity involved.