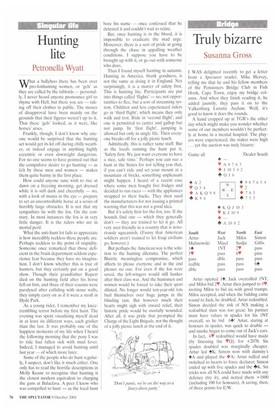 What a ballyhoo there has been over pro-foxhunting women, or 'gels' as they are called by the tabloids — personally, I never heard anyone pronounce girl to rhyme with Hell, but there you are — taking off their clothes in public. The moues of disapproval have been mainly on the grounds that their figures weren't up to it. That these 'gels' looked, as it were, like horses' arses.

Frankly, though, I don't know why anyone would be surprised that the hunting set would get its kit off during chilly weather, or indeed engage in anything highly eccentric or even downright dangerous. For no one seems to have pointed out that the compulsive desire to go hunting — as felt by these men and women — makes them quite barmy in the first place.

How could anyone sane wish to rise at dawn on a freezing morning, get dressed

while it is still dark and cheerfully no, with a look of mania in the eye — prepare to set an uncontrollable horse at a series of horribly large obstacles. It is not that my sympathies lie with the fox. On the contrary. In most instances the fox is in very little danger. It is the riders who are in mortal peril.

What the anti-hunt lot fails to appreciate is how incredibly reckless these people are. Perhaps reckless to the point of stupidity. Someone once remarked that those deficient in the brain department seldom experience fear because they have no imagination. I don't know whether this is true of hunters, but they certainly put on a good show. Though their grandfather Rupert died on the hunting field after his horse fell on him, and three of their cousins were paralysed after colliding with stone walls, they simply carry on as if it were a stroll in Hyde Park.

As a young rider, 1 remember my kneetrembling terror before my first hunt. The evening was spent visualising myself dead in at least six different ways, each grislier than the last. It was probably one of the happiest moments of my life when I heard the following morning that the pony I was to ride had fallen sick with mud fever. Indeed, I managed to avoid hunting until last year — of which more later.

Some of the people who do hunt regularly, I suspect, don't like it much either. One only has to read the horrific descriptions in Molly Keane to recognise that hunting is the closest modern equivalent to charging the guns at Balaclava. A peer I know who was compelled to hunt — as the local hunt bore his name — once confessed that he detested it and couldn't wait to retire.

But, once hunting is in the blood, it is impossible to eradicate the mad urge. Moreover, there is a sort of pride at going through the chase in appalling weather conditions. I suppose you have to be brought up with it, or go out with someone who does.

Thus I found myself hunting in autumn. Hunting in America, thank goodness, is not the same as doing it in England. Not surprisingly, it is a matter of safety first. This is hunting lite. Participants are put into things called 'flights' — no, not opportunities to flee, but a sort of streaming system. Children and less experienced riders go in 'third flight', which means they only walk and trot. Ride in 'second flight', and one is permitted to canter and gallop but not jump. In 'first flight', jumping is allowed but only in single file. Then everyone breaks off for a jolly picnic lunch.

Admittedly, this is rather tame stuff. But as the locals running the hunt put it, 'Safety first. We just want everyone to have a nice, safe time.' Perhaps you can sue a hunt in the States for not telling you that, if you can't ride and set your mount at a mountain of bricks, something unpleasant might happen. I heard of a recent case where some men bought five fridges and decided to run races — with the appliances strapped to their backs. They then sued the manufacturers for not issuing a printed warning that this was not a good idea.

But it's safety first for the fox, too. If the hounds find one — which they generally don't — they are trained to let it go. All very user-friendly in a country that is notoriously squeamish. (Funny that American soldiers aren't trained to let Iraqi civilians go, however.)

But perhaps the American way is the solution to the hunting dilemma. The perfect Blairite meaningless compromise, which affects to please everyone and in the end pleases no one. For even if the fox were saved, the left-wingers would still hanker after their class war. And the huntsmen and women would be forced to take their sport diluted. No longer would ten-year-old tots hurl themselves over huge jumps in the blinding rain. But however much their hearts might sigh with inward relief, their historic pride would be mortally wounded. After all, it was pride that prompted the Charge of the Light Brigade, not the thought of a jolly picnic lunch at the end of it.