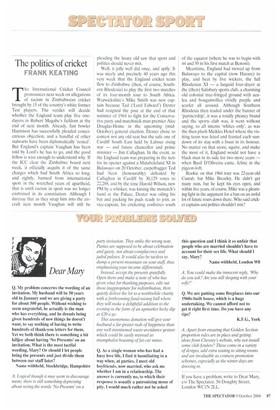 The politics of cricket

The International Cricket Council pronounces next week on allegations of racism in Zimbabwean cricket brought by 15 of the country's white former Test players. The verdict will decide whether the England team play five onedayers in Robert Mugabe's fiefdom at the end of next month. Already, fast bowler Harmison has successfully pleaded conscientious objection, and a handful of other stalwarts have been diplomatically 'rested'. But England's captain Vaughan has been told by Lord's he has to go, and the good fellow is wise enough to understand why. If the ICC clear the Zimbabwe board next week, it officially acquits it of the same charges which had South Africa so long, and rightly, banned from international sport in the wretched years of apartheid, that is until racism in sport was no longer enshrined in its constitution. Although I daresay that as they strap him into the aircraft next month Vaughan will still be

pleading the hoary old saw that sport and politics should never mix.

Well, it jolly well did once, and aptly. It was nicely and precisely 40 years ago this very week that the England cricket team flew to Zimbabwe (then, of course, Southern Rhodesia) to play the first two matches of its four-month tour to South Africa. Warwickshire's Mike Smith was new captain because Ted ('Lord Edward') Dexter had resigned the post at the end of that summer of 1964 to fight for the Conservative party and matchstick-man premier Alec Douglas-Home in the upcoming (midOctober) general election. Dexter chose to contest not any old seat but the safe one of Cardiff South East held by Labour rising star — and future chancellor and prime minister — Jim Callaghan. In the event, as the England team was preparing in the nets for its opener against a Matabeleland XI in Bulawayo on 20 October, carpetbagger Ted had been (honourably) defeated by Callaghan in Cardiff by 30,129 votes to 22,288, and by the time Harold Wilson, new PM by a whisker, was kissing the monarch's hand at the Palace, Dexter was oiling his bat and packing his pads ready to join, as vice-captain, his cricketing confreres south of the equator (where he was to begin with 44 and 50 in his first match at Benoni).

Meantime, England had moved up from Bulawayo to the capital (now Harare) to play, and beat by five wickets, the full Rhodesian XI — a languid four-dayer at the (then) Salisbury sports club, a charming old colonial tree-fringed ground with azalea and bougainvillea vividly purple and scarlet all around, Although Southern Rhodesia then traded under the banner of 'partnership', it was a totally phoney brand and the sports club was, it went without saying, to all intents 'whites only', as was the then plush Meikles Hotel where the visiting team was feted and feasted each sundown of its stay with a braai in its honour, No matter on that score, squire, and make the most of it, England would not have a black man in its side for two more years — when Basil D'Oliveira came, feline in the pigeon-loft.

Rookie on that 1964 tour was 22-year-old Cantab. bat Mike Brearley. He didn't get many runs, but he kept his eyes open, and within five years, of course, Mike was a gleaming light in the argument for a ban on an awful lot of future tours down there. Who said cricket captains and politics shouldn't mix?