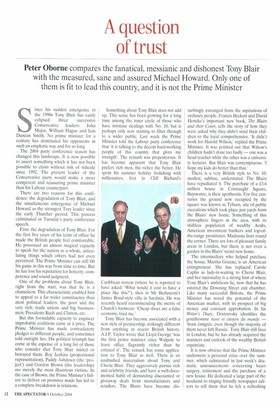 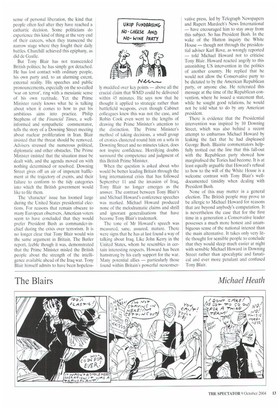 Peter °borne compares the fanatical, messianic and dishonest Tony Blair with the measured, sane and assured Michael Howard. Only one of them is fit to lead this country, and it is not the Prime Minister Since his sudden emergence in the 1990s Tony Blair has easily

eclipsed three successive Conservative leaders: John Major, William Hague and lain Duncan Smith. No prime minister for a century has dominated his opponents in such an emphatic way and for so long.

The 2004 party conference season has changed this landscape. It is now possible to assert something which it has not been possible to claim without risk of ridicule since 1992. The present leader of the Conservative party would make a more competent and reassuring prime minister than his Labour counterpart.

There are two reasons for this confidence: the degradation of Tony Blair, and the simultaneous emergence of Michael Howard as the strongest Tory leader since the early Thatcher period. This process culminated in Tuesday's party conference speech.

First: the degradation of Tony Blair. For the first five years of his term of office he made the British people feel comfortable. He possessed an almost magical capacity to speak for the nation as a whole, articulating things which others had not even perceived. The Prime Minister can still lift his game in this way from time to time. But he has lost his reputation for honesty, competence and sound judgment.

One of the problems about Tony Blair, right from the start, was that he is a chameleon. This characteristic enabled him to appeal to a far wider constituency than most political leaders: the poor and the very rich; trade unions and big businessmen; Presidents Bush and Clinton, etc.

But this formidable capacity to engineer improbable coalitions came at a price. The Prime Minister has made contradictory pledges to different people, and sometimes told outright lies. His political triumph has come at the expense of a long list of those who consider that Tony Blair misled or betrayed them. Roy Jenkins (proportional representation), Paddy Ashdown (the 'project') and Gordon Brown (the leadership) are merely the most illustrious victims. In the case of Brown, the Prime Minister's failure to deliver on promises made has led to a complete breakdown in relations. Something about Tony Blair does not add up. This sense has been growing for a long time among the inner circle of those who have intimate dealings with No. 10, but is perhaps only now starting to filter through to a wider public. Last week the Prime Minister told the Labour party conference that 'it is talking to the decent hard-working people of this country that gives me strength'. The remark was preposterous. It has become apparent that Tony Blair prefers rich men, the richer the better. He spent his summer holiday frolicking with millionaires, first in Cliff Richard's

Caribbean retreat (where he is reported to have asked: 'What would it cost to have a place like this?'), then in Mr Berlusconi's James Bond-style villa in Sardinia. He was recently heard recommending the merits of Church's footwear: 'Cheap shoes are a false economy, trust me.'

Tony Blair has become associated with a new style of premiership, strikingly different from anything in recent British history. A.J.P. Taylor wrote that Lloyd George 'was the first prime minister since Walpole to leave office flagrantly richer than he entered it'. The remark has some application to Tony Blair as well. There is an unabashed materialism about Tony and Cherie Blair. They aggressively pursue rich and celebrity friends, and have a well-documented habit of demanding discounted or giveaway deals from manufacturers and retailers. The Blairs have become dis turbingly estranged from the aspirations of ordinary people. Francis Beckett and David Hencke's important new book, The Blairs and their Court, tells the story of how they were asked why they didn't send their children to the local comprehensive. 'It didn't work for Harold Wilson,' replied the Prime Minister. It was pointed out that Wilson's children hadn't done too badly — one was a head teacher while the other was a university lecturer. But Blair was contemptuous. 'I hope my kids do better than that.'

There is a very British style to No. 10: modest, subfuse, understated. The Blairs have repudiated it. The purchase of a £3.6 million house in Connaught Square, Bayswater, is their apotheosis. For five centuries the ground now occupied by the square was known as Tyburn, site of public executions which took place just yards from the Blairs' new home. Something of this atmosphere lingers in the area, with its shiftless population of wealthy Arabs, American investment bankers and top-ofthe-range prostitutes. Madonna lives round the corner. There are lots of pleasant family areas in London, but there is not even a garden in the Blairs' weird new home.

The intermediary who helped purchase the house, Martha Greene, is an American entrepreneur. She has replaced Carole Caplin as lady-in-waiting to Cherie Blair, and her nationality is a strong hint of where Tony Blair's ambitions lie, now that he has entered the Downing Street exit chamber. Like many successful Britons, the Prime Minister has noted the potential of the American market, with its prospect of big money and constant approbation. In his Writer's Diary, Dostoevsky identifies the gentilhomme russe et citoyen du monde — 'born emigres, even though the majority of them never left Russia'. Tony Blair still lives in London, but he has already acquired the manners and outlook of the wealthy British expatriate.

It is now obvious that the Prime Minister underwent a personal crisis over the summer, which culminated in last week's dramatic announcements concerning heart surgery, retirement and the purchase of a new house. He dedicated a large part of the weekend to ringing friendly newspaper editors to tell them that he felt a refreshing sense of personal liberation, the kind that people often feel after they have reached a cathartic decision. Some politicians do experience this kind of thing at the very end of their careers, when they transcend the narrow stage where they fought their daily battles. Churchill achieved this epiphany, as did de Gaulle.

But Tony Blair has not transcended British politics; he has simply got detached. He has lost contact with ordinary people, his own party and, to an alarming extent, external reality. His speeches and public pronouncements, especially on the so-called 'war on terror', ring with a messianic sense of his own rectitude. Yet the Prime Minister rarely knows what he is talking about when it comes to how to put his ambitious aims into practice. Philip Stephens of the Financial Times, a wellinformed and sympathetic commentator, tells the story of a Downing Street meeting about nuclear proliferation in Iran. Blair insisted that the threat should be removed. Advisers stressed the numerous political, diplomatic and other obstacles. The Prime Minister insisted that the situation must be dealt with, and the agenda moved on with nothing determined or resolved. Downing Street gives off an air of impotent bafflement at the trajectory of events, and their failure to conform to the tidy categories into which the British government would like to file them.

The 'character' issue has loomed large during the United States presidential elections. For reasons that remain obscure to many European observers, American voters seem to have concluded that they would prefer President Bush as commander-inchief during the crisis over terrorism. It is no longer clear that Tony Blair would win the same argument in Britain. The Butler report, feeble though it was, demonstrated that the Prime Minister misled the British people about the strength of the intelligence available ahead of the Iraq war. Tony Blair himself admits to have been hopeless ly muddled over key points — above all the crucial claim that WMD could be delivered within 45 minutes. He says now that he thought it applied to strategic rather than battlefield weapons, even though Cabinet colleagues knew this was not the case, and Robin Cook even went to the lengths of drawing the Prime Minister's attention to the distinction. The Prime Minister's method of taking decisions, a small group of cronies clustered round him on a sofa in Downing Street and no minutes taken, does not inspire confidence. Horrifying doubts surround the competence and judgment of this British Prime Minister.

When the question is asked about who would be better leading Britain through the long international crisis that has followed September 11 and the invasion of Iraq, Tony Blair no longer emerges as the answer. The contrast between Tony Blair's and Michael Howard's conference speeches was marked. Michael Howard produced none of the melodramatic claims and shrill and ignorant generalisations that have become Tony Blair's trademark.

The tone of Mr Howard's speech was measured, sane, assured, mature. There were signs that he has at last found a way of talking about Iraq. Like John Kerry in the United States, whom he resembles in certain interesting respects. Howard has been hamstrung by his early support for the war. Many potential allies — particularly those found within Britain's powerful neoconser

vative press, led by Telegraph Newspapers and Rupert Murdoch's News International — have encouraged him to stay away from this subject. So has President Bush. In the wake of the Hutton inquiry the White House — though not through the presidential adviser Karl Rove, as wrongly reported — told Michael Howard not to criticise Tony Blair. Howard reacted angrily to this astonishing US intervention in the politics of another country. He replied that he would not allow the Conservative party to be dictated to by the American Republican party, or anyone else. He reiterated this message at the time of the Republican convention, where he issued a statement that, while he sought good relations, he would not be told what to do by any American president.

There is evidence that the Presidential intervention was inspired by 10 Downing Street, which was also behind a recent attempt to embarrass Michael Howard by leaking the fact that he had displeased George Bush. Blairite commentators helpfully trotted out the line that this fall-out with the Republican party showed how marginalised the Tories had become. It is at least equally arguable that Howard's refusal to bow to the will of the White House is a welcome contrast with Tony Blair's welldocumented timidity when dealing with President Bush.

None of this may matter in a general election. The British people may prove to be allergic to Michael Howard for reasons that are beyond anybody's computation. It is nevertheless the case that for the first time in a generation a Conservative leader possesses a much more honest and unambiguous sense of the national interest than the main alternative. It takes only very little thought for sensible people to conclude that they would sleep much easier at night with sensible Michael Howard in Downing Street rather than apocalyptic and fanatical and ever more petulant and confused Tony Blair.