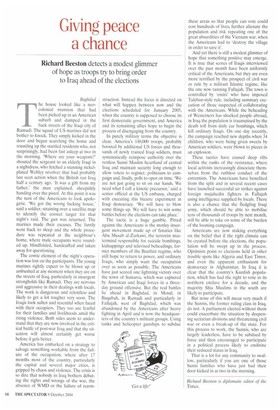 Richard Beeston detects a modest glimmer of hope as troops try to bring order to Iraq ahead of the elections Baghdad T, he house looked like a neocolonial mansion that had been picked up in an American suburb and dumped in the

back streets of the Iraqi city of Ramadi. The squad of US marines did not bother to knock. They simply kicked in the door and began searching the home and rounding up the startled residents who, not surprisingly, had been fast asleep at two in the morning. 'Where are your weapons?' shouted the sergeant to an elderly Iraqi in a nightdress, who fetched a stunning nickelplated Webley revolver that had probably last seen action when the British ran Iraq half a century ago. 'It was a gift from my father,' the man explained, sheepishly handing over the pistol. At this point it was the turn of the Americans to look apologetic. 'We got the wrong fucking house,' said a soldier, straining over a satellite map to identify the correct target for that night's raid. The gun was returned. The marines made their excuses. The family went back to sleep and the whole procedure was repeated at the neighbour's home, where male occupants were rounded up, blindfolded, handcuffed and taken away for questioning.

The comic element of the night's operation was lost on the participants. The young marines rightly expect to be blown up or ambushed at any moment when they are on the streets of Iraq, particularly in insurgent strongholds like Ramadi. They are nervous and aggressive in their dealings with locals. The work is dangerous and relentless and likely to get a lot tougher very soon. The Iraqis look sullen and resentful when faced with their occupiers. They too are fearful for their families and livelihoods amid the rising violence. Both sides seem to understand that they are now involved in the critical battle of post-war Iraq and that the situation will almost certainly get worse before it gets better.

America has embarked on a strategy to salvage something workable from the failure of the occupation, where after 17 months most of the country, particularly the capital and several major cities, is gripped by chaos and violence. The crisis is so dire that nobody in Iraq bothers debating the rights and wrongs of the war, the absence of WMD or the failure of recon

struction. Instead the focus is directed on what will happen between now and the elections scheduled for January 2005, when the country is supposed to choose its first democratic government, and America and its remaining allies hope to begin the process of disengaging from the country.

In purely military terms the objective is clear. America's 140,000 troops, probably boosted by additional US forces and thousands of newly trained Iraqi soldiers, must systematically reimpose authority over the restless Sunni Muslim heartland of central Iraq and maintain security long enough to allow voters to register, politicians to campaign and, finally, polls to open on time. 'We are not just going to sit on our hands. We need what I call a kinetic precursor,' said a senior official at the US embassy, charged with executing this bizarre experiment in Iraqi democracy. 'We will have to blow some things up. We will have to win some battles before the elections can take place.'

The tactic is a huge gamble. Pitted against the Americans is the motley insurgent movement made up of fanatics like Abu Musab al-Zarkawi, the terrorist mastermind responsible for suicide bombings, kidnappings and televised beheadings, former members of the Baathist regime, who still hope to return to power, and ordinary Iraqis, who simply want the occupation over as soon as possible. The Americans have just scored one lightning victory over the town of Samarra, which was captured by American and Iraqi forces in a threeday ground offensive. But the real battles lie ahead in Baghdad, in Mosul, in Baqubah, in Ramadi and particularly in Fallujah, west of Baghdad, which was abandoned by the Americans after heavy fighting in April and is now the headquarters of the country's militant groups. Using tanks and helicopter gunships to subdue these areas so that people can vote could cost hundreds of lives, further alienate the population and risk repeating one of the great absurdities of the Vietnam war, when the Americans had to 'destroy the village in order to save it'.

And yet there is still a modest glimmer of hope that something positive may emerge. It is true that scores of Iraqis interviewed over the past month have been uniformly critical of the Americans, but they are even more terrified by the prospect of civil war or rule by a militant Islamic regime, like the one now running Fallujah. The town is controlled by 'emirs' who have imposed Taleban-style rule, including summary execution of those suspected of collaborating with the Americans. While the beheading of Westerners has shocked people abroad, in Iraq the population is traumatised by the death toll from daily car bombings, which kill ordinary Iraqis. On one day recently, the campaign reached new depths when 34 children, who were being given sweets by American soldiers, were blown to pieces in an explosion.

These tactics have caused deep rifts within the ranks of the resistance, where local activists increasingly dissociate themselves from the ruthless conduct of the extremists. The Americans have benefited from the split and in several recent cases have launched successful air strikes against foreign mujahedin fighters in Fallujah using intelligence supplied by locals. There is also a chance that the fledgling Iraqi army, which should be able to mobilise tens of thousands of troops by next month, will be able to take on some of the burden of the looming campaign.

Americans are now staking everything on the belief that if the right climate can be created before the elections, the population will be swept up in the process. Optimists point to elections held in other trouble spots like Algeria and East Timor, and even the apparent enthusiasm for democracy in Afghanistan. In Iraq it is clear that the country's Kurdish population, which has had the right to vote in its northern enclave for a decade, and the majority Shia Muslims in the south are likely to participate.

But none of this will mean very much if the Sunnis, the former ruling class in Iraq, do not. A parliament elected without them could exacerbate the situation by deepening sectarian divisions and threatening civil war or even a break-up of the state. For this process to work, the Sunnis, who are largely leaderless, have to be subdued by force and then encouraged to participate in a political process likely to enshrine their reduced status in Iraq.

That is a lot for any community to swallow, particularly if you are one of those Sunni families who have just had their door kicked in at two in the morning.

Richard Beeston is diplomatic editor of the Times.