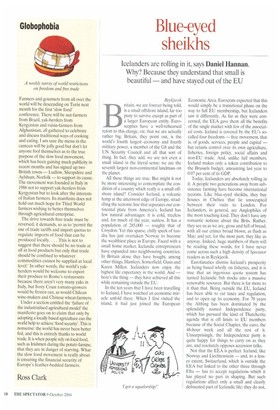 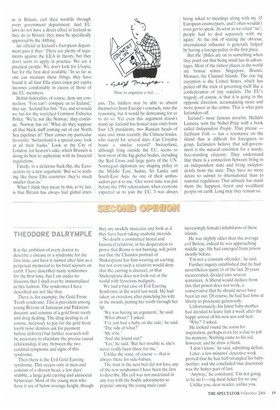 Icelanders are rolling in it, says Daniel Hannan. Why? Because they understand that small is beautiful — and have stayed out of the EU

Britain, we are forever being told, is a small offshore island, far too puny to survive except as part of a larger European entity. Eurosceptics have a well-rehearsed retort to this charge, viz, that we are actually rather big. Britain, they point out, is the world's fourth largest economy and fourth military power, a member of the G8 and the UN Security Council and all that sort of thing. In fact, they add, we are not even a small island in the literal sense: we are the seventh largest non-continental landmass on the planet.

All these things are true. But might it not be more interesting to contemplate the condition of a country which really is a small offshore island? Consider Iceland, a volcanic lump at the uttermost edge of Europe, straddling the tectonic line that separates our continental plate from America's. Iceland has few natural advantages: it is cold, treeless and, for much of the year, sunless. It has a population of 285,000 — roughly that of Croydon. Yet this sparse, chilly speck of tundra has just overtaken Norway to become the wealthiest place in Europe. Faced with a small home market. Icelandic entrepreneurs have expanded into neighbouring countries. In Britain alone they have bought, among other things, Hamleys, Somerfield, Oasis and Karen Millen. Icelanders now enjoy the highest life expectancy in the world. And — here's the thing— they have achieved all this while remaining outside the EU.

In the ten years that I have been travelling to Iceland, I have watched an economic miracle unfold there. When I first visited the island, it had just joined the European Economic Area. Eurocrats expected that this would simply be a transitional phase on the way to full EU membership, but Icelanders saw it differently. As far as they were concerned, the EEA gave them all the benefits of the single market with few of the associated costs. Iceland is covered by the EU's socalled four freedoms — free movement, that is, of goods, services, people and capital — but retains control over its own agriculture, fisheries, foreign policy, social affairs and non-EU trade. And, unlike full members, Iceland makes only a token contribution to the Brussels budget, amounting last year to 0.07 per cent of its GDP.

Today, Icelanders are absolutely rolling in it. A people two generations away from subsistence farming have become international tycoons. Like blue-eyed sheikhs, they buy houses in Chelsea that lie unoccupied between their visits to London. For Icelanders, in general, are Anglophiles of the most touching kind. They don't have any romantic notions about the Brits. Rather, they see us as we are, gross and full of bread, with all our crimes broad blown, as flush as May; and yet, for the most part, they like us anyway. Indeed, huge numbers of them will be reading these words, for I have never come across such a high density of Spectator readers as in Reykjavik.

Eurofanatics dismiss Iceland's prosperity as being based wholly on fisheries, and it is true that an ingenious quota system has turned Icelandic fish stocks into a massive renewable resource. But there is far more to it than that. Being outside the EU, Iceland has been able to cut taxes and regulation, and to open up its economy. For 70 years the Althing has been dominated by the splendidly named Independence party, which has pursued the kind of Thatcherite agenda that is off limits to EU members because of the Social Chapter, the euro, the 48-hour week and all the rest of it. Unsurprisingly. the Independence party is quite happy for things to carry on as they are, and resolutely opposes accession talks.

Not that the EEA is perfect. Iceland, like Norway and Liechtenstein — and, to a lesser extent, Switzerland, which is outside the EEA but linked to the other three through Efta — has to accept regulations which it has played no part in shaping. But such regulations affect only a small and clearly delineated part of Icelandic life; they do not, as in Britain, curl their tendrils through every government department. And EU laws do not have a direct effect in Iceland as they do in Britain; they must be specifically approved by the Althing.

An official in Iceland's European department puts it thus: 'There are plenty of arguments against the EEA in theory, but they don't seem to apply in practice. We are a practical people. We don't look for Utopia, but for the best deal available.' In so far as one can measure these things, they have found it: all four Efta states enjoy per capita incomes comfortably in excess of those of the EU members.

British federalists, of course, deny any connection. 'You can't compare us to Iceland,' they say. 'Iceland has fish.' Yes, and so would we but for the wretched Common Fisheries Policy. 'We're not like Norway,' they continue. 'Norway has oil.' What do they suppose all that black stuff coming out of our North Sea pipelines is? Then comes my particular favourite: 'Switzerland is a special case: look at all their banks.' Look at the City of London, for heaven's sake, which Brussels is doing its best to asphyxiate with its financial regulations.

Finally, in a delicious back-flip. the Eurozealots try a new argument. 'But we're nothing like these Efta countries: they're much smaller than us.'

What I think they mean by this, to be fair, is that Britain has always had global inter

ests. The tiddlers may be able to absent themselves from Europe's counsels, runs the reasoning, but it would be demeaning for us to do so. Yet even this argument doesn't stand up. Iceland has hosted state visits from four US presidents, two Russian heads of state and, most recently, the Chinese leader, who stayed for several days. Can Croydon boast a similar record? Switzerland, although lying outside the EU, seems to host most of the big global bodies, including the Red Cross and large parts of the UN. Norwegian diplomats are shaping policy in the Middle East, Sudan, Sri Lanka and South-East Asia. As one of their ambassadors put it to me, 'Our worst time was just before the 1994 referendum, when everyone expected us to join the EU. I was always being asked to meetings along with my 15 European counterparts. and I often wouldn't even get to speak. As soon as we voted "no", people had to deal separately with me again.' At the risk of stating the obvious, international influence is generally helped by having a foreign policy in the first place.

But the 'philes are on to something when they point out that being small has its advantages. Most of the richest places in the world are bonsai states: Singapore, Brunei, Monaco, the Channel Islands. The one big exception is the United States, which has pulled off the trick of governing itself like a confederation of tiny statelets. The EU's tragedy, of course, is that it is going in the opposite direction, accumulating more and more power at the centre. That is what puts Icelanders off.

Iceland's most famous novelist, Hand& Laxness, won the Nobel Prize with a book called Independent People. That phrase — Sjalfskett Folk — has a resonance on the island that is difficult for foreigners to grasp. Icelanders believe that self-government is the natural condition for a sturdy, free-standing citizenry. They understand that there is a connection between living in an independent state and living independently from the state. They have no more desire to submit to international than to national regulation. That attitude has made them the happiest, freest and wealthiest people on earth. Long may they remain so.