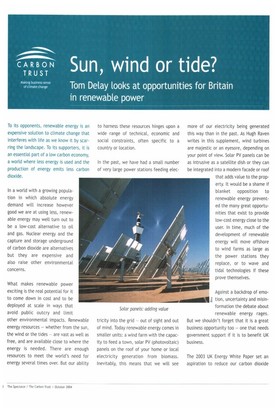 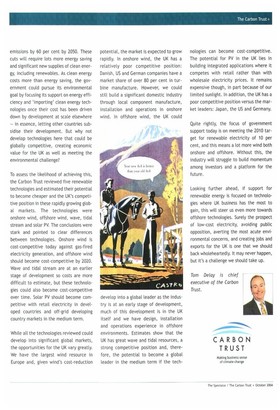 Tom Delay looks at opportunities for Britain in renewable power

To its opponents, renewable energy is an expensive solution to climate change that interferes with life as we know it by scarring the landscape. To its supporters, it is an essential part of a low carbon economy, a world where less energy is used and the production of energy emits less carbon dioxide.

In a world with a growing population in which absolute energy demand will increase however good we are at using less, renewable energy may well turn out to be a low-cost alternative to oil and gas. Nuclear energy and the capture and storage underground of carbon dioxide are alternatives but they are expensive and also raise other environmental concerns.

What makes renewable power exciting is the real potential for it to come down in cost and to be deployed at scale in ways that avoid public outcry and limit other environmental impacts. Renewable energy resources — whether from the sun, the wind or the tides — are vast as well as free, and are available close to where the energy is needed. There are enough resources to meet the world's need for energy several times over. But our ability to harness these resources hinges upon a wide range of technical, economic and social constraints, often specific to a country or location.

In the past, we have had a small number of very large power stations feeding elec tricity into the grid — out of sight and out of mind. Today renewable energy comes in smaller units: a wind farm with the capacity to feed a town, solar PV (photovoltaic) panels on the roof of your home or local electricity generation from biomass. Inevitably, this means that we will see more of our electricity being generated this way than in the past. As Hugh Raven writes in this supplement, wind turbines are majestic or an eyesore, depending on your point of view. Solar PV panels can be as intrusive as a satellite dish or they can be integrated into a modern facade or roof that adds value to the property. It would be a shame if blanket opposition to renewable energy prevented the many great opportunities that exist to provide low-cost energy close to the user. In time, much of the development of renewable energy will move offshore to wind farms as large as the power stations they replace, or to wave and tidal technologies if these prove themselves.

Against a backdrop of emotion, uncertainty and misinformation the debate about renewable energy rages. But we shouldn't forget that it is a great business opportunity too — one that needs government support if it is to benefit UK business.

The 2003 UK Energy White Paper set an aspiration to reduce our carbon dioxide emissions by 60 per cent by 2050. These cuts will require lots more energy saving and significant new supplies of clean energy, including renewables. As clean energy costs more than energy saving, the government could pursue its environmental goal by focusing its support on energy efficiency and 'importing' clean energy technologies once their cost has been driven down by development at scale elsewhere — in essence, letting other countries subsidise their development. But why not develop technologies here that could be globally competitive, creating economic value for the UK as well as meeting the environmental challenge?

To assess the likelihood of achieving this, the Carbon Trust reviewed five renewable technologies and estimated their potential to become cheaper and the UK's competitive position in these rapidly growing global markets. The technologies were onshore wind, offshore wind, wave, tidal stream and solar PV. The conclusions were stark and pointed to clear differences between technologies. Onshore wind is cost-competitive today against gas-fired electricity generation, and offshore wind should become cost-competitive by 2020. Wave and tidal stream are at an earlier stage of development so costs are more difficult to estimate, but these technologies could also become cost-competitive over time. Solar PV should become competitive with retail electricity in developed countries and off-grid developing country markets in the medium term.

While all the technologies reviewed could develop into significant global markets, the opportunities for the UK vary greatly. We have the largest wind resource in Europe and, given wind's cost-reduction potential, the market is expected to grow rapidly. In onshore wind, the UK has a relatively poor competitive position: Danish, US and German companies have a market share of over 80 per cent in turbine manufacture. However, we could still build a significant domestic industry through local component manufacture, installation and operations in onshore wind. In offshore wind, the UK could develop into a global leader as the industry is at an early stage of development, much of this development is in the UK itself and we have design, installation and operations experience in offshore environments. Estimates show that the UK has great wave and tidal resources, a strong competitive position and, therefore, the potential to become a global leader in the medium term if the tech nologies can become cost-competitive. The potential for PV in the UK lies in building integrated applications where it competes with retail rather than with wholesale electricity prices. It remains expensive though, in part because of our limited sunlight. In addition, the UK has a poor competitive position versus the market leaders: Japan, the US and Germany.

Quite rightly, the focus of government support today is on meeting the 2010 target for renewable electricity of 10 per cent, and this means a lot more wind both onshore and offshore. Without this, the industry will struggle to build momentum among investors and a platform for the future.

Looking further ahead, if support for renewable energy is focused on technologies where UK business has the most to gain, this will steer us even more towards offshore technologies. Surely the prospect of low-cost electricity, avoiding public opposition, averting the most acute environmental concerns, and creating jobs and exports for the UK is one that we should back wholeheartedly. It may never happen, but it's a challenge we should take up.