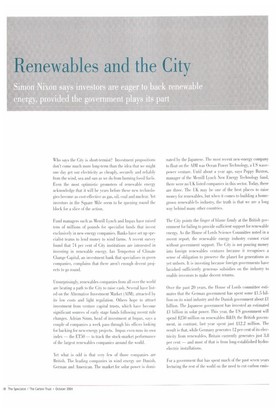 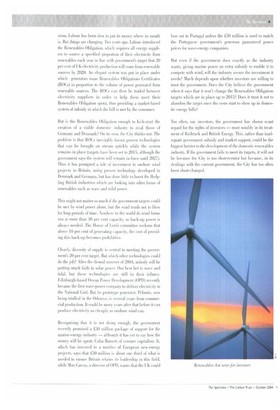 Who says the City is short-termist? Investment propositions don't come

much more long-term than the idea that we might one day get our electricity as cheaply, securely and reliably from the wind, sea and sun as we do from burning fossil fuels. Even the most optimistic promoters of renewable energy acknowledge that it will be years before these new technologies become as cost-effective as gas, oil, coal and nuclear. Yet investors in the Square Mile seem to be queuing round the block for a slice of the action.

Fund managers such as Merrill Lynch and Impax have raised tens of millions of pounds for specialist funds that invest exclusively in new-energy companies. Banks have set up specialist teams to lend money to wind farms. A recent survey found that 74 per cent of City institutions are interested in investing in renewable energy. Ian Temperton of Climate Change Capital, an investment bank that specialises in green companies, complains that there aren't enough decent projects to go round.

Unsurprisingly, renewables companies from all over the world are beating a path to the City to raise cash. Several have listed on the Alternative Investment Market (A I M), attracted by its low costs and light regulation. Others hope to attract investment from venture capital trusts, which have become significant sources of early stage funds following recent rule changes. Adrian Simm, head of investment at Impax. says a couple of companies a week pass through his offices looking for backing for new-energy projects. Impax even runs its OW11 index — the ET50 — to track the stock-market performance of the largest renewables companies around the world.

Yet what is odd is that very few of those companies are British. The leading companies in wind energy are Danish. German and American. The market for solar power is domi Rated by the Japanese. The most recent new-energy company to float on the AIM was Ocean Power Technology, a US wavepower venture. Until about a year ago, says Poppy Buxton, manager of the Merrill Lynch New Energy Technology fund, there were no UK listed companies in this sector. Today, there are three. The UK may be one of the best places to raise money for renewables, but when it comes to building a homegrown renewable I s industry, the truth is that we are a long way behind many other countries.

The City points the finger of blame firmly at the British government for failing to provide sufficient support for renewable energy. As the House of Lords Science Committee noted in a recent report, the renewable energy industry cannot exist without government support. The City is not pouring money into foreign renewables ventures because it recognises a sense of obligation to preserve the planet for generations as yet unborn. It is investing because foreign governments have lavished sufficiently generous subsidies on the industry to enable investors to make decent returns.

Over the past 20 years, the House of Lords committee estimates that the German government has spent some £1.5 billion on its wind industry and the Danish government about £1 billion. The Japanese government has invested an estimated it billion in solar power. This year, the US government will spend $250 million on renewables lio&D the British government, in contrast, last year spent just £12.2 million. The result is that, while Germany generates 12 per cent of its electricity from renewables, Britain currently generates just 3.8 per cent — and most of that is from long-established hydroelectric installations.

For a government that has spent much of the past seven years lecturing the rest of the world on the need to cut carbon emis slims, Labour has been slow to put its money where its mouth is. But things are changing. Two years ago, Labour introduced the Renewables Obligation. which requires all energy suppliers to source a specified proportion of their electricity from renewables each year in line with government's target that 2(1 per cent of UK electricity production will come from renewable sources by 2020. An elegant system was put in place under which generators issue Renewalsles Obligations Certificates (ROCs) in proportion to the volume of power generated from renewable sources. The ROCs can then he traded between electricity suppliers in order to help them meet their Renewables Obligation quota, thus providing a market-based system of subsidy in which the bill is met by the consumer.

But is the Renewables Obligation enough to kick-start the creation of a viable domestic industry to rival those of Germany and Denmark? On its own, the City thinks not. The problem is that B.f./Cs inevitably favour proven technologies that can be brought on stream quickly while the system remains in place (targets have been set to 2015, although the government says the system will remain in force until 2027). Thus it has prompted a tide of investment in onshore wind projects in Britain, using proven technology developed in Denmark and Germany, but has done little to boost the fledgling British industries which are looking into other forms of renewables such as wave and tidal power.

This might not matter so much if the government targets could be met by wind power alone, hut the wind tends not to blow for long periods of time. Nowheir in the world do wind farms run at more than 30 per cent capacity, so back-up power is always needed. The House of Lords committee reckons that above 10 per cent of generating capacity, the cost of providing this back-up becomes prohibitive.

Clearly, diversity of supply is central to meeting the government's 20 per cent target. But which other technologies could do the job? After the dismal summer of 2004, nobody will he putting much faith in solar power. Our best bet is wave and tidal, but these technologies are still in their infancy. Edinburgh-based Ocean Power Development (OPD) recently because the first wave-power company to deliver electricity to the National Grid. But its prototype generator, Pelamis, now being trialled in the Orkneys. is several years from commercial production. It could be many years after that before it can produce electricity as cheaply as onshore wind can.

Recognising that it is not doing enough, the government recently promised a £50 million package of support for the marine-energy industry — although it has yet to say how the money will be spent. Cohn Burnett of venture capitalists Si. which has invested in a number of European new-energy projects, says that £50 million is about one third of what is needed to ensure Britain retains its leadership in this field, while Max Caress, a director of OPT), warns that the UK could

lose out to Portugal unless the £50 million is used to match the Portuguese government's generous guaranteed power prices for wave-energy companies.

But even if the government does exactly as the industry wants, giving marine power an extra subsidy to enable it to compete with wind, will the industry secure the investment it needs? Much depends upon whether investors are willing to trust the government. Does the City believe the government when it says that it won't change the Renewables Obligation targets which are in place up to 2015? Does it trust it not to abandon the target once the costs start to show up in domestic energy bills?

Too often, say investors, the government has shown scant regard for the rights of investors — most notably in its treatment of Railtrack and British Energy. This, rather than inadequate government subsidy and market support, could he the biggest barrier to the development of the domestic renewables industry. If the government fails to meet its targets, it will not be because the City is too short-termist hut because, in its dealings with the current government, the City has too often been short-changed.