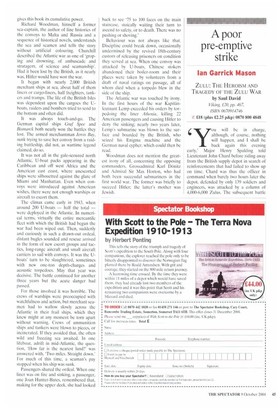 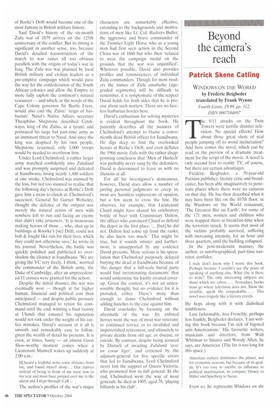 ZULU: THE HEROISM AND TRAGEDY OF THE ZULU WAR

although, of course, nothing although, of course, nothing will happen, and I shall be back again this evening early, Major Henry Spalding told Lieutenant John Chard before riding away from the British supply depot in search of reinforcements that had failed to show up on time. Chard was thus the officer in command when barely two hours later the depot, defended by only 139 soldiers and engineers, was attacked by a column of 4,000-6,000 Zulus. The subsequent battle of Rorke's Drift would become one of the most famous in British military history.

Saul David's history of the six-month Zulu war of 1879 arrives on the 125th anniversary of the conflict. But its timing is significant in another sense, too, because David's detailed reconstruction of the march to war raises all too obvious parallels with the origins of today's war in Iraq. The Zulu war was planned by local British military and civilian leaders as a pre-emptive campaign which would pave the way for the confederation of the South African colonies and allow the Empire to more fully exploit the continent's natural resources — and which, in the words of the Cape Colony governor Sir Bartle Frere, would also end the Zulus' reign of barbarism'. Natal's Native Affairs secretary Theophilus Shepstone described Cetshwayo, king of the Zulus, as a tyrant, and portrayed his large but part-time army as an imminent threat to Natal. And since the king was despised by his own people, Shepstone reasoned, only 1,000 troops would be needed to overthrow him.

Under Lord Chelmsford, a rather larger army marched confidently into Zululand and was promptly surprised and defeated at Isandlwana, losing nearly 1,400 soldiers at one stroke. Chelmsford was stunned by the loss, but not too stunned to realise that the following day's heroics at Rorke's Drift gave him a straw to clutch at. Chelmsford's successor, General Sir Garnet Wolseley, thought the defence of the outpost was merely the natural action of men with nowhere left to run and facing an enemy that didn't take prisoners. 'It is monstrous making heroes of those ... who, shut up in buildings at Roorke's [sic] Drift, could not bolt & fought like rats for their lives, which they could not otherwise save,' he wrote in his journal. Nevertheless, the battle was quickly polished and publicised to overshadow the disaster at Isandlwana. We are giving the VC very freely, I think,' worried the commander of the British army, the Duke of Cambridge, after an unprecedented 11 crosses were granted for the action.

Despite the initial disaster, the war was eventually won — though at far higher human, financial and political cost than anticipated and despite public pressure Chelmsford managed to retain his command until the end, winning a final victory at Ulundi that ensured his reputation would not sink under the weight of his earlier mistakes. David's account of it all is smooth and remarkably easy to follow, given the wealth of detail he presents. It is even, at times, funny — an almost Goon Show-worthy moment comes when a Lieutenant Maxwell wakes up suddenly at 2.00 a.m.:

[IJ heard a frightful noise some distance from me, and found myself alone ... Our natives instead of being in front of me were now in my rear and must have jumped over me in the alarm and I slept through it all ...

The author's profiles of the war's major

characters are remarkably effective, extending to the backgrounds and motivations of men like Lt. Col. Redvers Buller, the aggressive and brave commander of the Frontier Light Horse who as a young man had first seen action in the Second China war of 1860 but who then 'refused to wear the campaign medal on the grounds that the war was unjustified'. Wherever possible, David also provides profiles and reminiscences of individual Zulu commanders. Though for most readers the names of Zulu antabutho (agegraded regiments) will be difficult to remember, it is symptomatic of the respect David holds for both sides that he is precise about such matters. There are no faceless barbarian hordes here.

David's enthusiasm for solving mysteries is evident throughout the book. He patiently describes all the nuances of Chelmsford's attempt to blame a conveniently dead British officer for Isandlwana. He digs deep to find the overlooked heroes at Rorke's Drift, and even deflates the 1966 movie Zulu with the rather disappointing conclusion that 'Men of Harlech' was probably never sung by the defenders. David is determined to leave us with no illusions at all.

For all his investigator's demeanour, however, David does allow a number of jarring personal judgments to creep in; most are harmless expressions of opinion, but a few seem to cross the line. He observes, for example, that Lieutenant Chard might have shared his celebratory bottle of beer with Commissary Dalton, the officer who convinced Chard to defend the depot in the first place, `... [but] he did not. Dalton had come up from the ranks; he also knew too much.' This might be true, but it sounds sinister and furthermore is unsupported by any evidence David presents. More serious is his speculation that Chelmsford purposely delayed burying the dead at Isandlwana because of 'the danger that a full-scale burial party would find incriminating documents' that would undermine his hastily created coverup. Given the context, it's not an unreasonable thought, but no evidence for it is provided, either. There's more than enough to damn Chelmsford without adding hunches to the case against him.

David concludes by focusing on the aftermath of the war. Its enlisted heroes went the way of most war veterans: to continued service or to invalided and impoverished retirement, and ultimately to private deaths from old age, or disease, or suicide. By contrast, despite being accused by Disraeli of invading Zululand 'avec un coeur Leger', and criticised by the adjutant-general for five specific errors that led to Isandlwana, Lord Chelmsford never lost the support of Queen Victoria, who promoted him to full general. In the end, Chelmsford went the way of most generals: he died in 1905, aged 78, 'playing billiards in his club'.